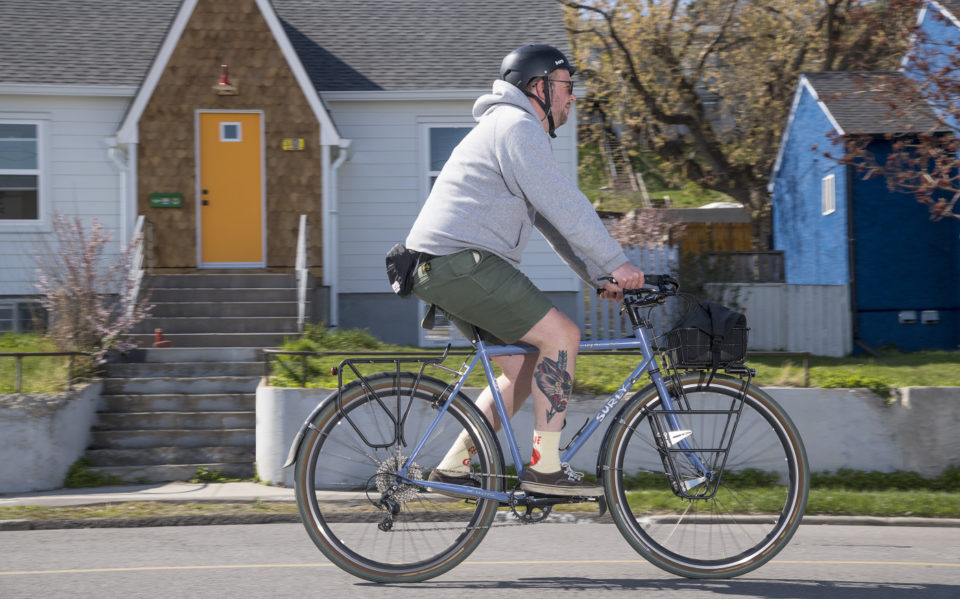 Before you ride down into Fish Creek Park or hit the city streets, it’s best practice to make sure the bike that has sat dormant in your garage or at the back of the shed over the past several months can handle the trek.

Jackie Kowalenko , a bike technician and service shop manager for Calgary Cycle’s Canyon Meadows location, has seen her fair share of mangled derailleurs and busted brakes, and says that giving your bike some love at the top of the season is a simple way to avoid a disastrous first ride.

“A bicycle is a fine-tuned machine, and there are a lot of systems to them,” says Kowalenko. “The main reason why you wouldn’t want to just jump on a bike is because you could cause some damage to the bike if it’s not been stored properly over winter or over a couple of years.”

If you’ve gone through the task of digging your bike out of storage for the season, Kowalenko also recommends taking the time to check these five systems:

Chances are your tires will need to be re-inflated after sitting in storage over the winter. Kowalenko says many tires will have a pounds per square inch (psi) rating on them, but there are some hard-and-fast rules if you can’t find specifics. “A good rule of thumb is a mountain bike is like 30 to 40 psi, with a hybrid with smooth tires, you’re going to want to be around 60, and a road bike, around 80 to 100.”

Beyond a simple inflation, Kowalenko notes that knowing how to change a tire inner tube is an invaluable skill.

“Fixing a flat inner tube is something that all cyclists should be comfortable with doing because you never know when it’s going to happen, and it’s probably going to be at the worst time,” says Kowalenko.

All you’ll need to fix a popped tube on the go is a hand pump, spare inner tube and tire levers. From there, it’s all about practice — try doing a dry run at home by popping off your tire and tube, then putting it back together so it’s a little easier for you to potentially do on the side of a trail down the line.

This one is crucial if you plan on taking off down a hill — there’s no worse surprise than realizing you don’t have the control that you thought you did.

Try to remember roughly what your brakes felt like last season – if they feel different this year, it’s worth taking a look at.

Depending on your brake system, common issues can differ. Hydraulic brakes may need more fluid or may have air in the system, while mechanical brakes could have rusted cables or could be disconnected somewhere. While YouTube can be your friend with brakes, Kowalenko advises being cautious and bringing the bike in to a shop if things are getting a little complicated.

“Honestly, it can be the weirdest issue,” says Kowalenko. “Brakes are one of those things that have their whole own personality.”

Just like brakes, Kowalenko recommends taking your bike for a brief ride to make sure it shifts as you expect it to. If it’s not measuring up as you shift from hardest to easiest gear and back again, it could be an alignment issue, which can be remedied through a YouTube tutorial if you’re mechanically savvy enough. Be sure to track down a video with a demo bike that has the same amount of gears as yours, as Kowalenko says small variances can affect adjustments. If it continues to pose an issue, there’s no shame in admitting defeat and bringing it in to a shop.

If your chain is coming off the gear completely while you shift, Kowalenko says the issue may also be a little more complicated and worth bringing in for diagnosis.

Another common problem early in the season is stiff shifters due to a rusted and corroded shift cable. Replacement is an easy fix, and will result in much easier shifting.

“That feeling of stiff gummy shifting is so unnecessary because [all that’s needed] to replace it is a couple of feet of cable housing and a shift cable,” says Kowalenko. “And then it’s fixed. Your shifting is back to butter.”

Lastly, it never hurts to check your chain lube. Make sure you clean off debris that may have gathered on your chain during storage months, add a healthy amount of chain lube, then wipe down excess to an even coat.

Your bike’s suspension should fit you to a tee, so once again, a test ride with some weight put on the front end should give you a good idea of its current status.

If the shock isn’t compressing past halfway or not returning back up, take note. While on rare occasions this could be a loss of air pressure, more often it’s an internal issue, which Kowalenko says is worth bringing in for a tech to check out.

Beyond the big systems of a bike, taking the time to go over smaller moving parts is also never a bad idea. Kowalenko suggests spinning wheels and shaking your bike side to side to ensure bearings in your wheel hubs aren’t loose and rattling.

Similarly, it’s worth checking that your pedals are spinning freely and that your handlebars are moving smoothly from side to side. A common issue she sees in the Calgary Cycle shop is handlebars that are rattling or knocking.

“[When] you’re running over bumps and the whole front end of the bike is literally shaking and vibrating, that’s not comfortable to ride on,” says Kowalenko.

Often times, this can be solved by adjusting where the handlebars meet the frame of the bike — you want it to be snug, but not too tight. If you have a torque wrench, torque settings will often be on the bike near the corresponding fastener — a quick Google search should also suffice if you can’t track it down. If you don’t have a torque wrench, a wrist tight motion and some trial and errors should do the trick on the handlebars.

A bell: Having a horn or bell for your bike is required by law in Calgary, and will run you anywhere from $5 to $60, though they’re all likely to get the job done.

A water bottle cage: Don’t neglect hydration on a summer bike ride. Ranging anywhere from $10 to around the $100 mark, investing in a water bottle cage can be a game changer down the line. “A bottle cage and a bottle on your bike is going save you some heat exhaustion and just an uncomfortable day in general, or that headache after a long ride,” says Kowalenko.

A helmet: Although only required by law for riders under 18, wearing a helmet is always a good idea. But don’t think any old helmet dug out of storage will always do — Kowalenko notes that helmets do expire, with expiration dates often printed somewhere near the back, and should be replaced roughly every five years. If you’ve been in a crash where your helmet has come into play, you should also replace it, as one big impact will compromise a helmet. Prices can vary greatly, but a stylish new helmet will run you anywhere from around $50 up to $200.

Going the Distance from an Acceptable Distance

Once you’re done with your once over and have the gear you need, it may be wise to do a refresher on the rules of the road (or pathway). While biking offers a way to enjoy the outdoors while physical distancing, not everything goes.

Be sure to know the provincial laws in place and have the required equipment — a bell, brakes, and if you’re biking at dawn, dusk or in the dark, a white headlight, red tail light and red rear reflector. You should also be well-versed on basic hand signals and keep your speed under 20 km/hr on pathways.

With COVID-19 restrictions still in place, the City of Calgary urges cyclists to maintain two metres of distance or, conveniently, roughly the size of an average bicycle from tire to tire. Calgary pathways are typically between 2.5 and four metres wide, which can also help you visualize the distance you should be leaving.

On the road, be mindful of areas where you may come into closer contact with others, including alleys, intersections, driveways, narrow paths and bridges. Being courteous from a distance makes the ride more enjoyable for all.