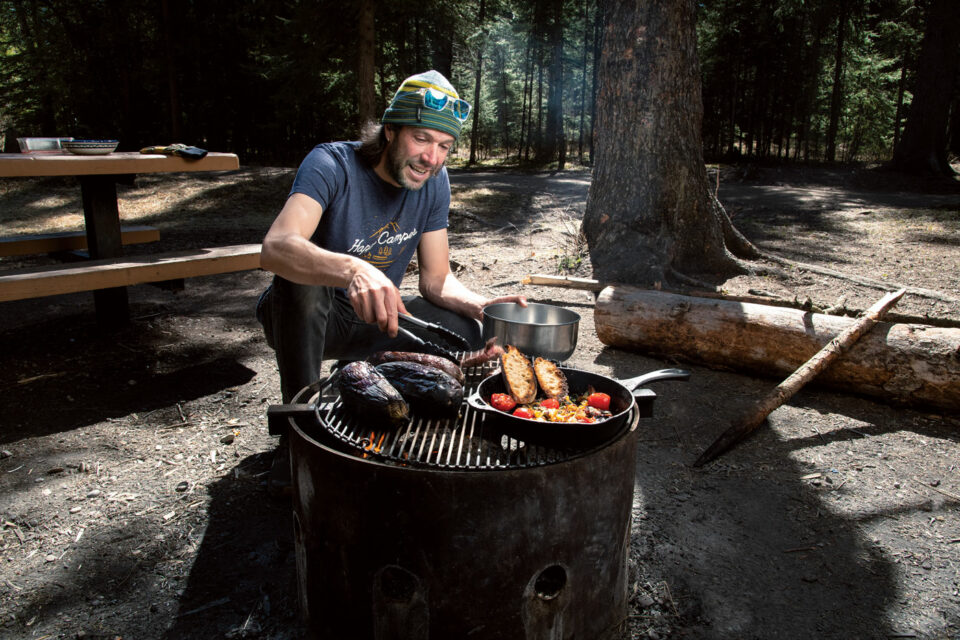 Welcome to Avenue‘s Ultimate Summer Challenge. During July and August 2021, we’re challenging our readers to try a different fun activity every week to make the most of the summer. Plus, we show you how to take that activity to the next level. Click here to see the rest of the challenges.

For most of us, knowledge of cooking over an open fire starts and ends with hotdogs on a stick. But this summer, it’s time to go beyond tube steak. Seasoned campfire cooks such as Aviv Fried, owner and head baker at Sidewalk Citizen Bakery, will tell you that a campfire is just a heat source, and if you can manage that heat source, then the sky’s the limit on what you can cook on it.

Fried prefers a free-form campfire over the cylindrical iron firepits with attached grill bars that you see in provincial and national parks, mainly for the flexibility of being able to place a grill at the optimum distance from the heat. If rules forbid fires outside the provided pits, he recommends putting rocks in the bottom to raise the fire closer to the grill. “You want to be nice and close to the heat source — but not too close!” he warns.

When cooking meat, it’s important to let the fire burn for a while first so you get a nice steady heat that doesn’t diminish, he says. One common mistake people make is building a huge fire, and then right away trying to cook in the flames, resulting in meat that is charred on the outside and raw in the middle.
Fried pairs his proteins with fire-roasted vegetables, and is especially fond of eggplant, though he notes it’s important to pierce it in multiple spots prior to placing it on the fire, or it will “blow up like a balloon and explode.” He scrapes away the charred skin, mashes the roasted eggplant with sliced garlic, salt and pepper and a drizzle of olive oil, and slathers it on pieces of grilled bread. (Fried is understandably particular to Sidewalk Citizen sourdough, though any hearty loaf will do).

A well-equipped camp kitchen will set you up for success: from knives to cutting boards, Fried is a proponent of using the same calibre of kitchen tools in the outdoors as he uses at home. Other requisite tools include large metal tongs and heavy-duty work gloves, which provide better protection and more dexterity than an oven mitt.

Even if you come prepared, it might take a bit of practice before your open-fire efforts produce edible results. Fried’s best tip for first-timers? “Bring a stove also, so you don’t go hungry.”

Level Up : Bake Over an Open Fire

Anyone can roast a piece of meat over an open fire, but if you really want to impress your friends and family, how about baking a batch of cinnamon rolls over an open fire? Handmade in Sweden, the Svante Fredén Reflector Oven is a portable campfire cooking device that opens into a 16-inch-by-11.5-inch oven unit, big enough to hold a nine-inch pan. Made from lightweight aluminum, it weighs under two pounds, so it’s easily transportable.