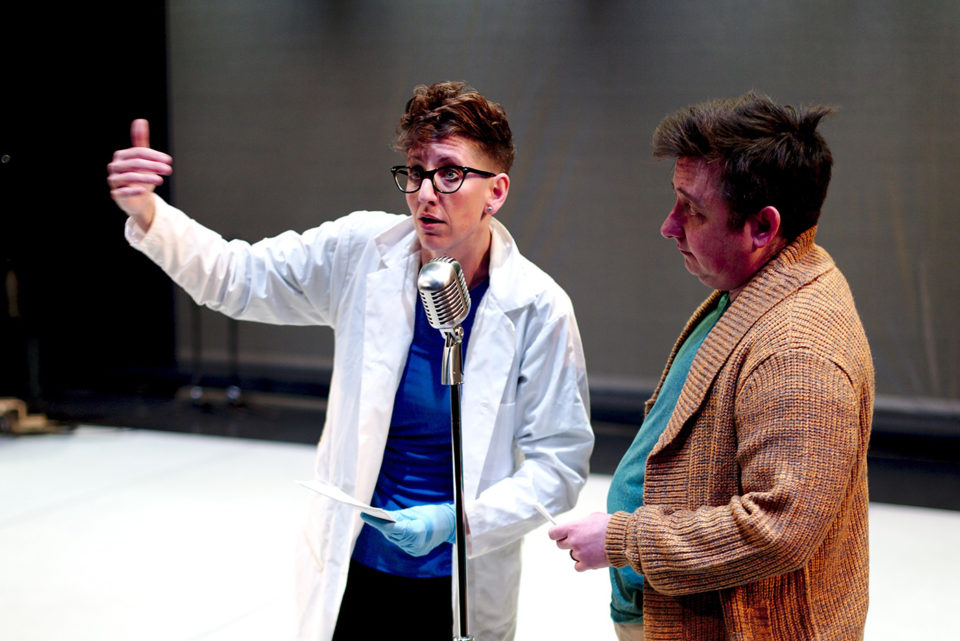 Local short The Key of T is one of 38 playing online as part of Fairy Tales Queer Film Festival. Photograph by Brooks Peterson.

In Laura Hynes’ office in Craigie Hall at the University of Calgary, she moves to grab a pad of sticky notes from her desk. While Ari Agha talks about the upcoming performance piece they’ve created, Key of T, Hynes writes on the pad.

She says she’s finally figured out how to describe what Key of T is. “A musically-oriented theatre piece with a social message,” she says.

“Perfect,” Ari Agha responds. “We’re only a week and half out.”

It’s this kind of back and forth between the duo, an overall understanding of each other’s intentions, that makes this project even more special. But what really makes it unique is that it’s one of the first of its kind.

When Agha, who is genderqueer, a life-long choir singer, researcher with a PhD and social planner for the City of Calgary, first decided they wanted to start testosterone therapy, one of their main concerns was how it would impact their voice.

Unfortunately, there’s not a lot of research, if any, available on the topic. “There’s websites, and there’s blogs, and there’s whatever, you know, but that’s not quite the same as empirical evidence,” Agha says.

Hynes had already been working with Agha as a private voice coach when Agha approached her with a proposal to do the research themselves. Hynes has a Doctor of Musical Arts (DMA) and had the knowledge relating to voice science that compliments Agha’s background in research. She was also the perfect person to help plan a performance piece.

“We thought, what a beautiful way to bring together these things we love – music and theatre, and basically, a social justice issue and to be able to tell Ari’s story in a way that would help other people understand,” says Hynes.

The piece is so difficult to put into words because it includes a little bit of everything. Key of T includes Agha and Hynes as the principal performers, along with a quartet of singers, a live choir, electronic soundscapes, recordings of interviews, recordings of Agha’s voice from when they started testosterone therapy to now, documentary footage and much, much more.

The duo believe that a performance is the perfect way to tell Agha’s journey with their voice. “I always feel like music and theatre are such powerful ways to tell stories,” Hynes says.

While the case study they’re conducting about Agha’s voice is their way to contribute something to the available research in hopes other’s might be inspired to do their own case studies, the performance piece is a way to tell Agha’s story – in their own words.

“I mean, obviously, I took testosterone, and I knew my voice would likely get lower. And I was happy about that. But at the same time, it was a huge loss for me. I knew my voice and I loved my voice,” says Agha.

They hope to make people a little more aware of their own voices and help other transgender singers see that there is someone like them, struggling with the same difficult decisions as them.

“No, we’re not going to tell them the findings of our study in this performance. But they will be like, ‘Look, here’s a trans person who took testosterone and they’re still singing,’ at the very least.”

You can buy tickets to see Key of T on September 27 and 28, as well as read more about their research and performance, at keyoft.com.