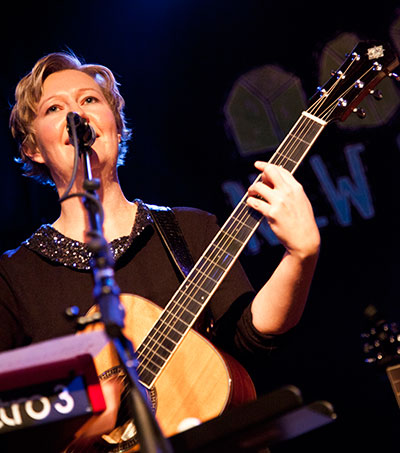 There’s a reason making music is called “playing,” and Calgary quartet New Street gets that.

“We’re just in it to have a nice time,” says Adrienne Weare, vocalist, guitarist and percussionist with the band, which also includes bassist and producer Dale Ulan, and multi-instrumentalists Carmen Marquis and Corry Ulan, who also plays in acoustic folk-pop foursome Magnolia Buckskin.

“If we get sick of something, we don’t play it anymore. We play for the joy of playing, so we don’t get bogged down too much by what we should or shouldn’t do, which is nice. The point is not to get too stressed out about anything.”

New Street has been a going concern since 2003, playing original music that draws on a wide range of influences and traditions to create “funky folk blues,” Weare says. The band’s album, A Curious Affair, overlays propulsive basslines with roots, funk, folk, jazz and world music sounds. It adds up to something that’s at once accessible and unusual.

Part of the magic is the blend of formal musical knowledge and training, or lack thereof, in the band.

“I don’t have a musical background at all,” Weare says. “I don’t know the first thing about music, but Corry does. I make up guitar chords and all kinds of stuff, and she can work with it and make sense out of it. It works really well.”

Saturday’s show at the Ironwood will be rich in variety, with New Street playing a couple of sets, punctuated by short performances including dance and an opera set by soprano Michelle Sinclair, mezzo-soprano Angela Cavar and pianist Eleanor May, and perhaps some other surprises.

“The main point, for me, is that people do such beautiful and interesting things that don’t get seen. It’s not enough for a whole show, but for five or 10 minutes it’s beautiful. I like having different things happening,” Weare says. “We like to try new things, make it sound good, new ways of presenting ideas – things you can put music around.

“Apparently, we’re quite easy to listen to,” she adds. “We’re not loud.”