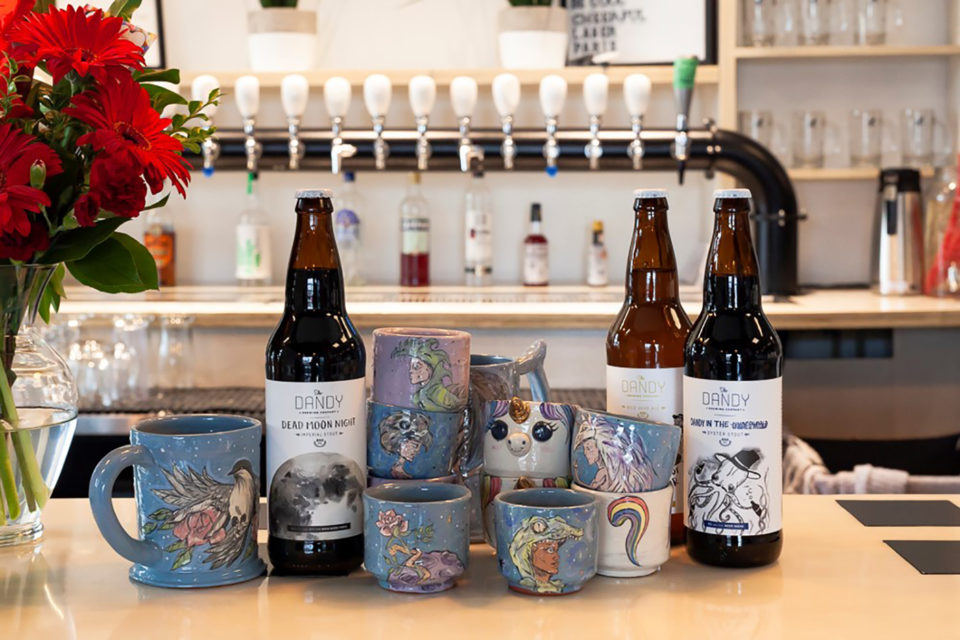 Drink ware made by instructor Alisha Adams is pictured at The Dandy Brewing Company. Photograph courtesy of Indefinite Arts Centre.

After the success of their collaboration on a stein-making class earlier this year, Indefinite Arts Centre (IAC) is once again teaming up with The Dandy Brewing Company to teach folks about ceramics and beer. Starting on April 30, students will meet weekly on Tuesdays from 7 p.m. to 9 p.m. to make a set of six unique flight glasses, putting them to use at Dandy during the final session on June 11. The class costs $150 and is open to those aged 18 years or older.

The idea came from IAC’s director of artist programs and development, Karly Mortimer, who joined the organization in April of 2018. Mortimer got to know Dandy brewer and co-owner Dylan Nosal back when she was an art student and he was in culinary school. After visiting Dandy’s new digs in Ramsay and seeing their artist-in-residence program (and artful approach to beer), she felt they would make an ideal partner for a new class.

“I wanted to expand the way Indefinite Arts Centre can be a community resource, and reach beyond the 300 artists it sees each week. The partnership is a fun way to explore creative practices and requires no previous experience in ceramics,” she says.

The result was a seven-week class held in January and February 2019 where students created their own beer stein. It was so popular that it has been renewed for a second edition, which is good news for both artistically inclined beer lovers and IAC’s charitable initiatives.

IAC is Canada’s oldest and largest disability arts organization which provides artistic training, creation, and exhibition opportunities for people with developmental, physical, and acquired disabilities. Mortimer says that due to Dandy’s support in this class IAC has been able to generate revenue that helps support the organization’s programs.

Craft Beer Night: Flight Edition will run Tuesdays at 7 p.m. from April 30 to June 11. The first and last classes are held at The Dandy Brewing Company (2003 11 St. S.E.) while all others are held at IAC’s headquarters (8038 Fairmount Dr. S.E.). You can find more information and register at ouriac.ca.