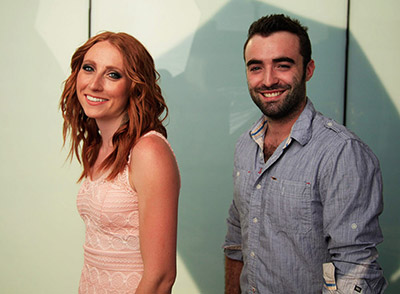 There’s no mystery to the quality that separates those who make music from those who sit on the couch and wish they could do it. Hint: It’s not about talent, although audiences always appreciate at least a modicum of that.

It’s the need to communicate, to connect directly and instantaneously with people at a gut level. Ryan Roy of rising Calgary folk-pop duo Georgia Sound puts it this way: “We really love getting on stage and pouring out our emotions through each song. To be vulnerable in front of strangers is exciting, and even more so when the music is well-received.”

Since a chance meeting at an open mic night a couple of years ago, guitarist Roy and keyboardist Shannon Magee, both of whom also sing, have forged a sound that’s uniquely their own. Roy’s early grounding in high-energy rock and Magee’s classical piano and voice training add up to something unexpected – melodic, country-seasoned acoustic pop with a stunningly high calibre of musicianship, songwriting and singing.

The vocal blend of Magee’s burnished clarity with Roy’s earnest, rough-hewn emotionality is a revelation. On paper, it probably shouldn’t work. But does it ever, especially on the band’s latest single, “Something New.” Like The Civil Wars meets The XX, except better; this is what boy-girl vocals are meant to sound like.

Magee and Roy are both high on playing “Something New” for audiences. “It’s different live because we don’t have the drums and bass that we do in the single, but I think people like hearing the more organic version, too,” Magee says. “And we definitely get lots of comments about our harmonies. We work really hard on trying to make those stand out.”

Adds Roy: “We put a lot of work into that song in the studio, and I think it shows during our live performance.”

As Georgia Sound gears up to record a full-length album to follow last year’s five-song “One Way Path” EP, audiences can expect to hear new music at the duo’s shows. “We have a batch of tunes that we really want to get out into the music world,” Roy says. The new songs showcase their songwriting, which has ventured into new territory, feeding off their widely different backgrounds to create music that’s at once familiar and entirely original. “Our songwriting has evolved a lot since we first met two years ago.”

In November, Magee and Roy will travel to South Carolina to attend the Artists Music Guild Heritage Awards, for which they’ve received a nomination.

Says Magee: “It’s a super cool feeling, and a huge honour, to hear that someone we don’t even know liked our music enough to make the effort to nominate us for something like this.”

Ontario-based singer-songwriter Sean Burns and Calgary acts The Ashley Hundred and Rotary Park will also be part of Friday’s Oktoberfest-themed night at the Palomino, which gets underway at 5 p.m.