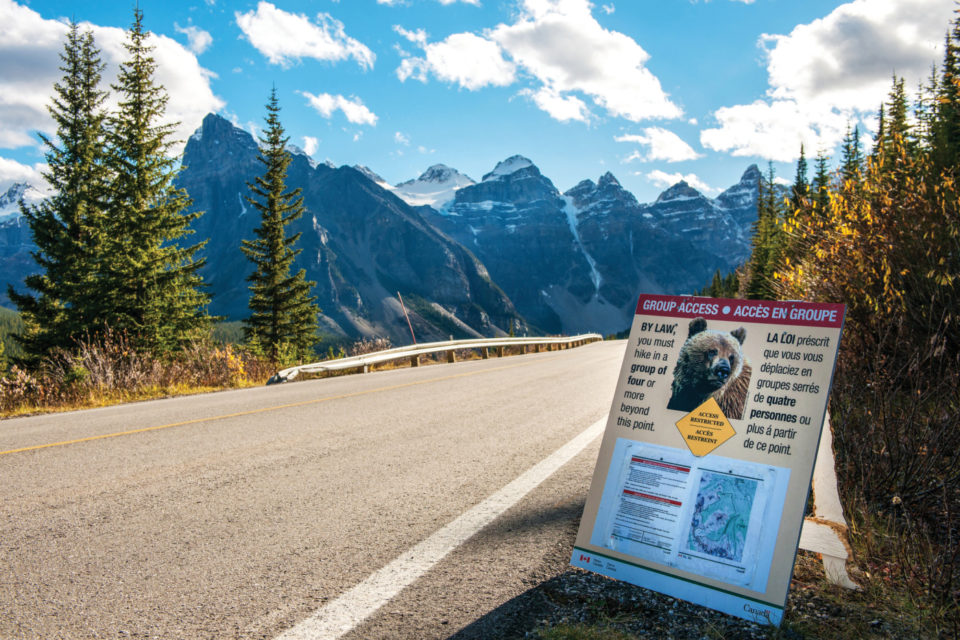 So, your day pack is stocked with energy bars, your cellphone and an extra layer of clothing, your water bottle is full and you’ve parked and secured your vehicle in the lot or whatever roadside parking there is (and yes, you’ve got your keys). Your hiking shoes are tied up the way you like them and you’re 100-per cent ready to hit the trail.

How ominous. What now?

Unlike an official Alberta Parks or Parks Canada trail closure, which legally restricts anyone from entering an area due to bear activity, a warning still allows hikers to proceed.

A closure is a bummer, but at least it’s clear. With a warning, just because you technically can still do the hike, the bigger question is: should you? A closure is often a proactive measure to keep people away from areas ripe with intensive production of bears’ favourite food, or a response to reports of a bear acting aggressively toward people while protecting cubs or a carcass. A warning, on the other hand, means there have been multiple sightings of a bear near the trail as recent as 24 hours ago. “[With] a warning, we don’t have knowledge of an imminent danger, but we have an elevated level of concern,” says John Paczkowski, an ecologist with Alberta Parks. “We warn people there has been above-average bear activity in a spot, and they should proceed with more caution than they would typically.”

If you do decide to proceed, it’s important to know how to be safe. Number one, is not to be alone — groups of four or more are far less likely to have a serious bear encounter, Paczkowski says. If you’re flying solo and really don’t want to turn back, ask another hiking group if you can tag along. Additionally, if you have your dog with you, it might be best not to venture forth. Even on leash, dogs can exacerbate the aggression level of bears, or escalate intensity, Paczkowski says.

When you’re out on the trail, making lots of noise is key to helping avoid a surprise bear attack. Also key is every member of the group carrying bear spray — and knowing how to use it. Both Parks Canada and Alberta Parks have instructions on their respective websites on how to properly use bear spray, or if you’re buying bear spray at an outfitter such as MEC or Bass Pro Shops you can always ask the staff.

While you’re hiking, keep an eye out for signs of bears. If you see lots of digging marks or scat (bear poop) consider turning around. It’s not fun admitting defeat, but it’s better to be safe than stubborn. If you find you’re frequently venturing into areas that have bear activity warnings, consider taking a bear awareness course from an organization such as Calgary-based Bear Safety & More, which offers customized workshops and bear assessments for the oil and gas, forestry, construction, transportation and tourism sectors. The Outdoor Centre at the University of Calgary presents regular bear-safety lectures (the Outdoor Centre website also links to an instructional video on how to use bear spray).

Official warning or not, the regional mountain areas require bear awareness at all times. “Anytime you set foot out of your vehicle, or travel in the natural environment of Kananaskis, you are, in fact, in bear country,” Paczkowski says, “so you need to be alert and prepared, and you need to anticipate having a bear encounter. With that in mind, you want to avoid that eventuality.” —T.B.

What is Bear Spray Anyway?

Bear spray is a mix of substances including capsicum, an oily resin derived from hot peppers, in a pressurized canister. When sprayed at an approaching bear, the capsicum causes temporary eye irritation and breathing difficulty, which is no doubt awful for the bear, but ultimately not fatal. A canister will spray for a duration of about eight to 10 seconds. Bear spray is similar in makeup to pepper spray, though pepper spray is classified as a prohibited weapon as defined by the Firearms Act, while “bear deterrent spray” is legal to possess and carry (so long as it’s not being used on humans). The canisters expire, so it’s important to check the dates from season to season. —S.A.