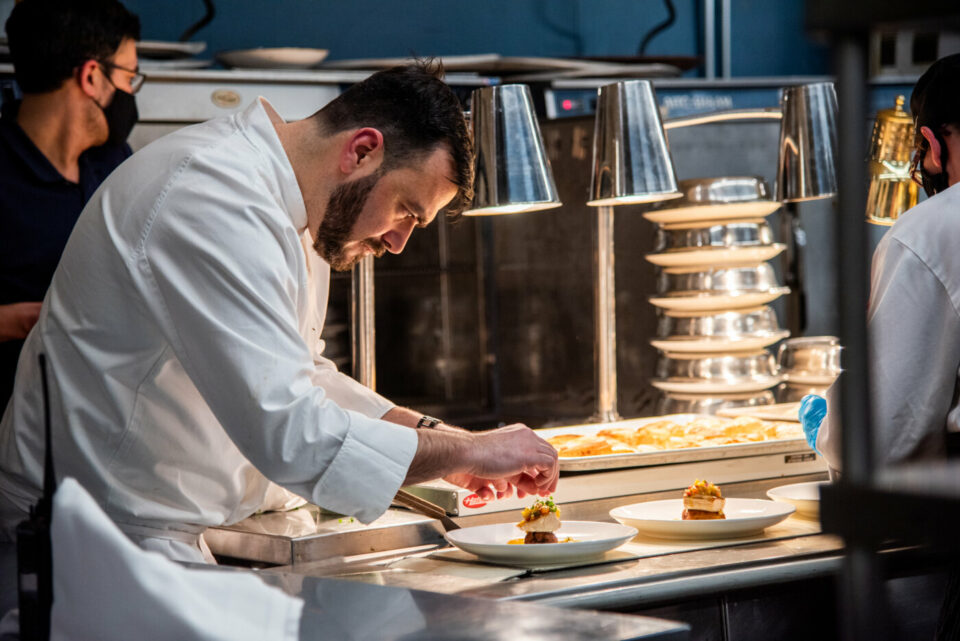 At Devour! The Canadian Rockies Food Film Festival, held at Fairmont Jasper Park Lodge (JPL), the eating begins shortly after checking in and continues through the entire weekend, with short films, workshops and self-guided mountain pursuits along the way.

The festival, one of the JPL’s signature events, is an offshoot of Wolfville, Nova Scotia’s Devour! The Food Film Fest, an event founded by chef Michael Howell and Lia Rinaldo in 2009. That festival is held annually in October, however, throughout the year, Devour! hosts satellite events around the world to promote the Nova Scotia festival, connect a community of chefs and, ultimately, change the way people look at the world of food through film.

Devour! The Canadian Rockies is the largest of these satellite events. The 2022 edition kicked off with a Cabin Crawl, taking festivalgoers inside a selection of the JPL’s Signature Cabins, from the rustic Viewpoint Cabin to the sleeker Stanley Thompson Cabin. Inside each, participating guest chefs cooked up an exclusive menu, such as a Bahamian feast with snow crab claws and conch fritters by Howell (on top of running Devour!, he’s the consulting executive chef at The Green Turtle Club in Abaco, Bahamas).

The following day brought the annual Chili Smackdown (a Rocky Mountain twist on the Nova Scotia festival’s signature Chowder Smackdown), where guests taste iterations of the comfort dish made by the chefs and vote on their favourite.

The star event is the Devour! Gala Dinner — a multi-course meal where each is paired with a short, food-related film. All chefs select a film ahead of the festival and must create a dish that connects to it in some way. At the 2022 festival, the dessert course by Andrea Ouellet and Tricia Sullivan from Edmonton’s Duchess Bake Shop was a snowball-inspired meringue with a walnut crumb base and birch cream cheese mousse filling, to go along with the film Gustav, The Snow Chef, an eccentric parody about a chef who cooks with snow. In addition to resembling Gustav’s beloved ingredient, the dish also mirrored the layer of snow and ice still covering Lac Beauvert in mid-March.

That’s the thing: Just don’t forget to look up, and get out, in between all the devouring.

Mark your calendar (and save room) for the next edition of Devour! The Canadian Rockies, taking place March 31 to April 2, 2023.

3 Things to Do on Christmas Day In and Around Calgary

3 B.C. Ski Resorts That are Worth the Drive From Calgary