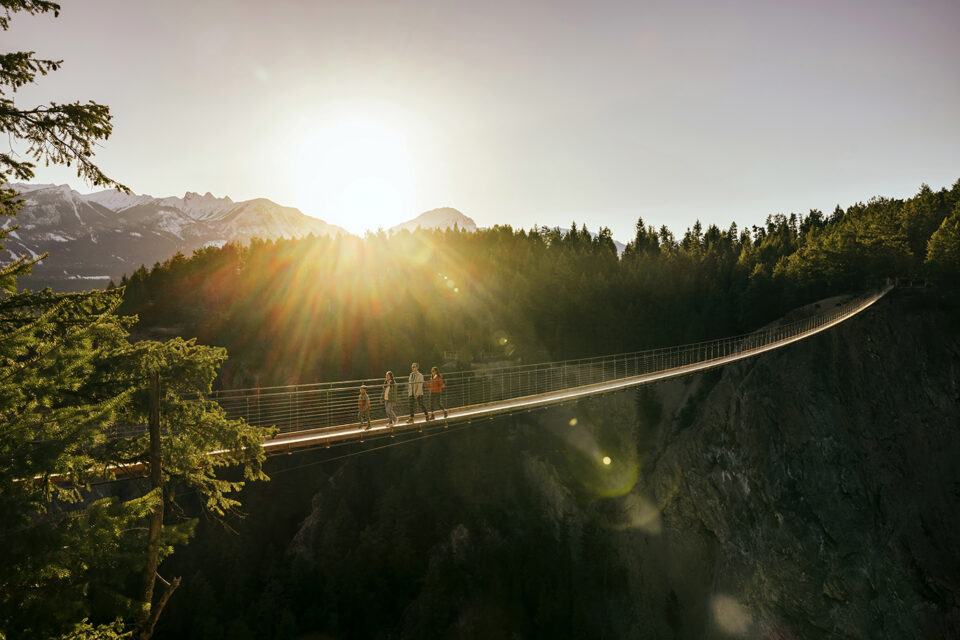 Open as of last summer, the Golden Skybridge is the tallest suspension bridge in Canada. Photograph courtesy of Pursuit/Chris Amat.

For many Calgarians, save diehard outdoor adventurers and skiers heading to Kicking Horse Mountain Resort, the town of Golden on the Alberta-B.C. border is a mere whistle stop for gas and a quick bite along the Trans-Canada. But while eyes have been on the massive reconstruction of the Kicking Horse Canyon section of Highway 1 just to the east, the town of 3,700 has quietly undergone its own metamorphosis. If Golden’s entrepreneurial residents have their way, from now on your view of the former railway and lumber town won’t solely be in the rearview mirror.

Nestled in a valley between the Purcell and the Rocky Mountains, at the junction of the Columbia and the Kicking Horse — two of Canada’s Heritage Rivers — Golden is an ideal destination for those looking for new things to do in the outdoors this summer. The drive to Golden from Calgary can be done in about three hours. While the Trans-Canada construction continues through this year (it’s projected to end in 2024), the highway will be open all summer to daytime traffic.

Downtown Golden is sporting a spiffy fresh look. Dike improvements along the Kicking Horse River wrapped up last September with the grand opening of a new riverwalk, transforming the 20th-century utilitarian industrial riverfront south of 9th Avenue. Along with burying power lines, this project replaced the dirt alley with a two-toned, wide concrete pathway embedded with geometric pebble-stone waves, benches, lamps and landscaping. The riverwalk invites a stroll, bike ride or a bite and beverage at businesses backing onto it. Several of these businesses are adding sunny outdoor seating or riverside patios with a view of Canada’s longest freestanding timber-frame bridge.

On the streetside of 9th Avenue, improvements continue this summer. A downtown plaza revitalization project is set to transform the underused square in front of the post office into a vibrant public space. Replacing the existing fountain with tables, benches, sunshades and landscaping will connect the main street to the riverwalk and encourage folks to gather. Golden is well known as a hub for extreme sports like paragliding, hang-gliding and downhill mountain biking, but the opening last June of the Golden Skybridge provides a new style of family-friendly thrills. The adventure park is operated by Pursuit, the mountain attraction company that runs the Banff Gondola.

Canada’s two highest suspension bridges are the big draw here. The first bridge is the tallest, spanning the Hospital Creek Gorge 130 metres above a rushing stream sluicing through the granite crag and tumbling waterfalls far below. (A big part of the challenge of crossing the jiggly bridge is refraining from grasping the handrails.) An interpretive accessible trail weaves through the forest on both sides of the ravine connecting the bridges, with viewing platforms offering stunning 360-degree mountain, canyon and valley vistas.

As it turns out, the first Skybridge is but a baby step when it comes to testing your mettle for heights. From the end of the bridge, the trail leads to the harnessing station for three treetop ropes challenge courses, including one designed just for kids, and a thrilling 365 m-long quad zipline back across the canyon. (Alternatively, you can cross over on the second bridge, a mere 80 m high).

The Skybridge base area features a children’s play park and restaurant, The Village Grill. Clambering through treehouses is a great way for young visitors to blow off steam, and their parents can have a drink and a bite while keeping an eye on their kids and enjoying the summer concert series performances. As of this summer, daring adventurers can also test their grit (and their stomachs) by free-falling on a giant tandem bungee swing, staged from a base area on the other side of the canyon. After the epic drop, the pendulum swings riders back and forth above the treetops and into the spray of the falls.

If bungee swings and ziplines aren’t really your thing, and you’re looking for a quieter, self-guided nature experience in the region, grab your binoculars and head for the Columbia Valley Bird Trail, a new addition to the two-year-old BC Bird Trail. The Columbia Wetlands, the largest intact wetlands in North America, are on the Pacific Flyway and provide a critical resting and feeding area for resident and migratory waterfowl like sandhill cranes and horned grebes.

Rooms at Riveredge is a new five-room boutique hotel in downtown Golden. Each room features a private covered patio adjacent to the riverwalk. Owned by the Dusevic family, longtime proprietors of the Golden Bakery & Deli next door, the rooms feature rustic wooden furniture and wall-mounted electric fireplaces beside the king-size beds. Last December also saw the opening of Basecamp Lodge Golden, a new property from the ever-expanding Canmore-based hospitality brand Basecamp Resorts.

Camp Moose Trail is a glamping (glamour-camping) experience 20 minutes from town in the Blaeberry Valley. The camp has six cozy trapper tents on platforms, with queen beds on handmade log frames and wood stoves to keep the mountain chill off at night. Shared facilities include a large kitchen tent, outdoor stone pizza oven and wood-fired barbecue, a firepit, cedar hot tub, heated shower and sauna. Breakfast is also included.

Nearby in the Blaeberry you can bed down in classic VW buses at Camping in the Woods. Owner Jeremiah Woods took his van-camping dream to CBC’s Dragon’s Den in 2020 and snared support from Lane Merrifield. The camp currently has five buses set up for overnighting, each with a picnic table, firepit and picket fence. The camp features a communal flush biffy and the “V-tub,” a VW Beetle convertible turned wood-burning hot tub. Woods is working on five more buses, with the intention of expanding his operation to 10 by year’s end.

​​Avenue’s writers and editors are occasionally invited to experience dining or adventure activities as a guest, including some of the experiences in this story. Neither complimentary experiences nor advertising are required for coverage in Avenue. Neither companies that advertise nor those that provide other incentives are promised editorial coverage, nor do they have the opportunity to review or approve stories before publication.