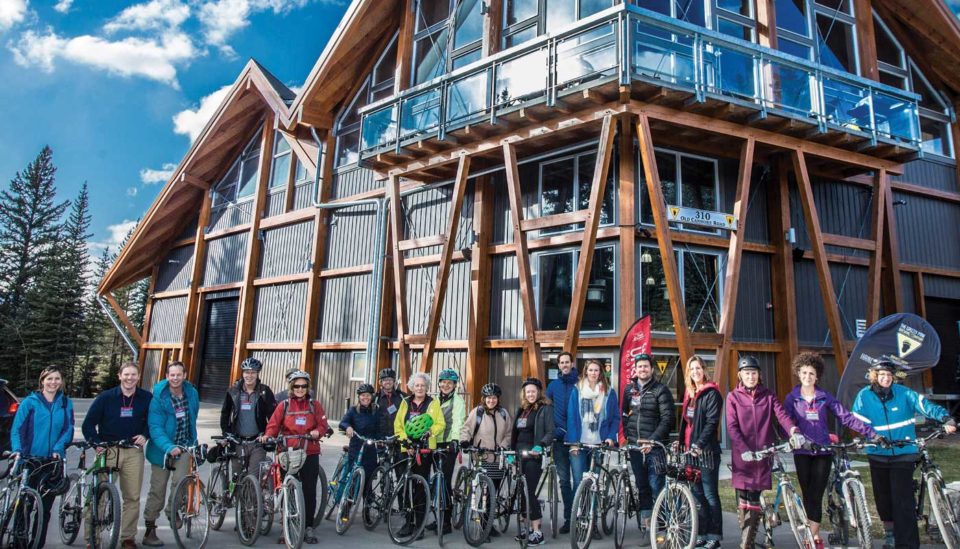 You can’t get much more quintessentially Canmore than an experience that incorporates food, wine, mountain bikes and Olympic athletes. At the progressive dinner by bike events hosted by the Canmore Uncorked Food & Drink Festival each year in May, sporty participants gather at the dinner hour at a central meeting point (last year it was the Grizzly Paw Brewery) and from there set out on a pedal-powered tour of four restaurants, with a food course and a voucher for an accompanying glass of wine or cocktail at each stop. Guiding the tours are Canmore-based Olympians — most likely to be cross-country skiers considering the town is home to a world-class Nordic-skiing competition facility.

The Olympian element is a nod to the progressive tour by bike originators: Canmore Olympic alumni-turned-hotelier-super-couple Sara Renner and Thomas Grandi. Back in 2014, Renner and Grandi signed up for one of the conventional progressive dinners by bus, but the sporty couple informed organizers that they intended to ride between restaurants instead. Their hack of the event proved so much fun that the couple convinced the festival organizers to add it to the lineup the following year, saying they would come back and serve as guides. Renner and Grandi still guide the odd tour, but have since delegated the role out to other Olympians, as well.

Progressive bike dinner participants don’t have to be Olympian-level fit, but there is a certain level of sportiness that you’ll need to bring to the table. The ride covers a lot of ground — literally. At one of last year’s dinners, things started with an uphill grind to the Iron Goat, followed by a coast back down to Mountain Mercato on Main Street. From there, velo-diners took the scenic route along treed pathways to the Canmore Golf and Country Club before the final push, an extended ride all the way out to Three Sisters Village for dessert at Market Bistro. Even more than the initial uphill climb to the Iron Goat, it was the ride back to town in the dark, lit by headlamps given out at the start of the tour, that really got the blood pumping.

Canmore Uncorked can facilitate bike rentals for this event if necessary. For more information visit canmoreuncorked.com