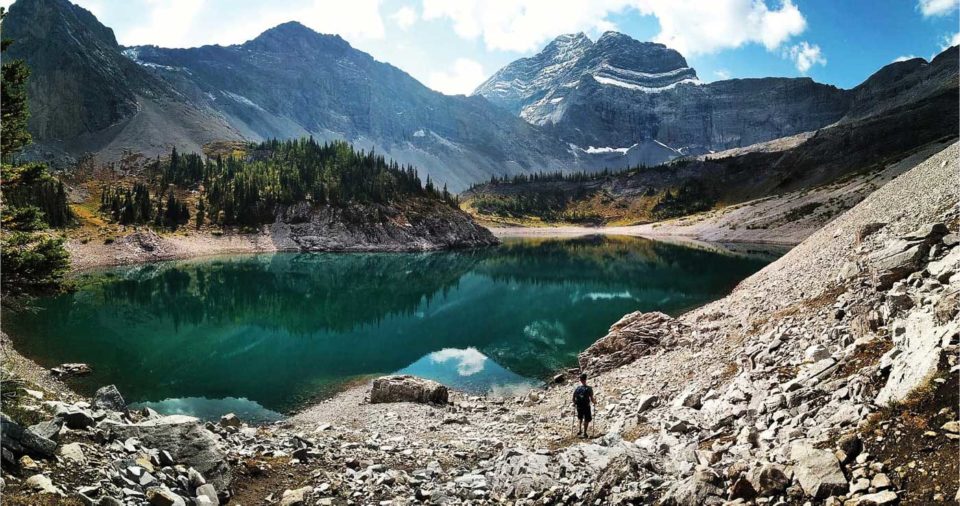 Up in the mountains of Kananaskis Country, among the imposing limestone peaks, there’s something inherently powerful about being near water. The Galatea Creek Trail is a true testament to this power.

The 2013 floods that surged through southern Alberta forever changed the trails in K-Country. With the backcountry campground at Lillian Lake completely wiped out, the Galatea Creek Trail was closed off in the aftermath and only officially reopened in 2015 after it was re-routed and rebuilt. Hiking today, you’ll still pass flood debris like uprooted trees and piles of branches strewn around a widened creek.

Water (specifically meltwater from winter snow) is also the main reason why this ever-popular trail is closed during the spring months, usually opening to hikers at the end of June. Setting off from the trailhead just an hour’s or so drive from Calgary on Highway 40, the trail slopes downward and crosses a large suspension bridge across the Kananaskis River. As you weave in and out of the lush forest, you’ll cross a total of 10 bridges that meander back and forth across Galatea Creek. At the 6.3-kilometre mark is Lillian Lake, the first of three alpine lakes on the trail. Encircled by trees, it is a shimmering emerald filled with cutthroat trout. Before you even see the lake you’re bound to see flashes of colourful nylon tents among the trees and hear the voices of backpackers (there are 17 backcountry campsites at Lillian Lake as well as washrooms). As you approach the shore, the view of the lake fully reveals itself and on a clear day the still water is like a mirror.

While some hikers stop for lunch here, call it a day and turn back, those who aspire to reach Galatea Lake will need to push on for another kilometre up the rocky scree, gaining 180 metres in that short distance. The vantage provides an expansive view of the mountains looking down at Lillian Lake. Continue on and you’ll be rewarded with not just one, but two more pristine lakes cradled by alpine cirques. Even on a hot summer day, there will, surprisingly, still be some snow patches by Lower Galatea Lake — a reminder of just how high up you are. Crowds of fellow hikers will have thinned by this point, even more so if you continue up the grassy section toward the bowl of the last lake. Hiking the entire 17-km round-trip route is both a strenuous exercise and humbling experience, which makes you fully appreciate water as a pure force of nature.

This 11-km-long trail has four connected glacial lakes and you’ll often see anglers catch-and-release on the shores of this backcountry fishing haven. The second lake is the deepest and clearest. Expect one major steep section.

Popular for a reason, this classic hike has it all: waterfalls, two brilliant aquamarine lakes, a petroglyph, rock climbing and views of Canmore. You can make it a loop of just under 3.5 km by going up the difficult way and coming down the easy path.

Many come here to start the trek to Rawson Lake but the eight-km loop around the upper lake is worth a hike in and of itself. The shoreline-hugging trail reveals ever-changing scenic views of the Fox, Foch, Sarrail, Lyautey and Indefatigable peaks.