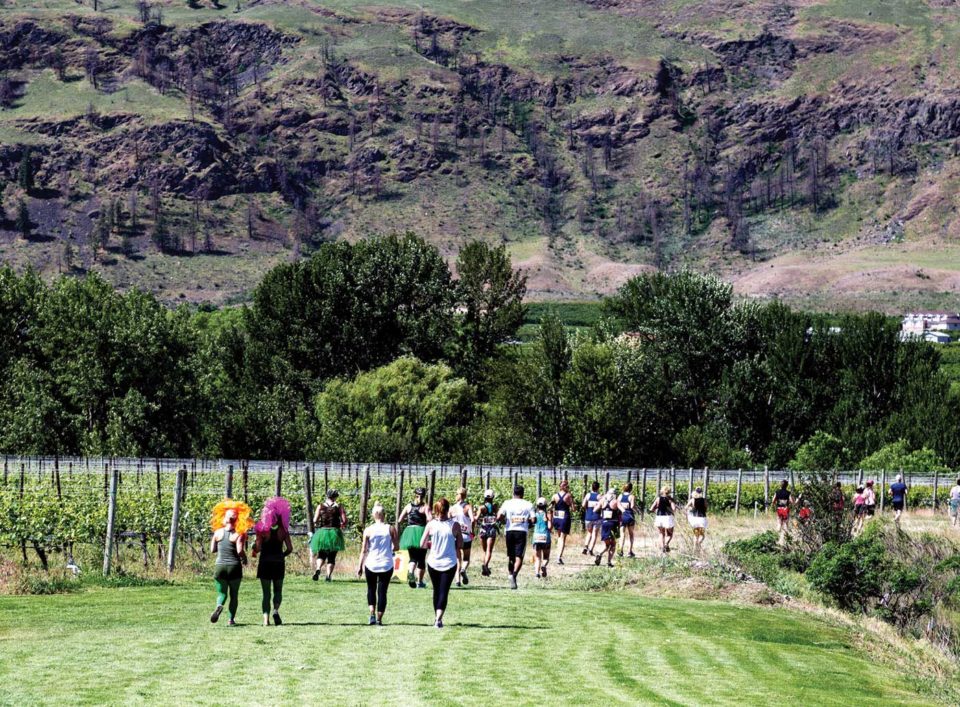 About a week before last year’s Half Corked Marathon, an annual event put on in May by the Oliver Osoyoos Winery Association, it occurred to me that what I had signed up for was, indeed, a half-marathon.

The jokey reference to over-indulging had up to that point overshadowed the fact that this event is, at its core, a run of approximately 18 kilometres (just a few shy of the official half-marathon distance of 21.0975 km). Though I could run the five kms that organizers recommend as a fitness baseline, I found myself with the uneasy feeling that I was going into it woefully underprepared.

As it turned out, I needn’t have worried.

The first indication that the Half Corked is no ordinary half-marathon is the fact that the jokey reference is not just a joke. Runners consume wine, not just as a post-run celebration, but before and during the run as well. Even if running is the core activity, wine is still really the whole point of the Half Corked.

The event, now it its 11th year, was created to showcase and celebrate the viniculture of the Golden Mile and Black Sage Road benches connecting the South Okanagan towns of Osoyoos and Oliver, B.C. Currently, around 41 grape-growers and winemakers can be found in this region, known for its hot, dry summers.

In recent years, the Half Corked has started on the grounds of the Burrowing Owl Winery in Osoyoos and ended in Oliver’s main community park. The route winds through multiple vineyards and wineries, each beckoning runners to pause and sample their product. There are also additional tasting stations for wineries that are located off the route, and runners can expect a winetasting every km or so, offering samples of both reds and whites (or blushes, or bubbles). You’ll find food stations along the way as well, with fare ranging from cut fruit, to mini-muffins, to satay skewers.

The second indication that the Half Corked is no ordinary half-marathon is the official pre-race Primavera dinner the night before (though part of the Half Corked official weekend programming, the dinner requires a separate ticket). Far from stretching or meditating or laying in a hyperbaric chamber or whatever you expect marathon types to be doing on the eve of a race, Primavera is more like attending a laid-back — and boozy — country wedding reception. Last year’s dinner was a progressive affair, starting with a reception and appetizer at Stoneboat Vineyards. Diners then walked through the rows of grapes to the neighbouring Oliver Twist Estate Winery for the long-table main course, a family-style spread of salads, polenta and house-made sausage in rich tomato sauce paired with bottle upon bottle of wine. If anyone in attendance was concerned about wine consumption affecting their race time the next day, they certainly didn’t show it.

The third indication that the Half Corked is no ordinary half-marathon is the boisterous scene at the starting area, where seasoned Half Corkers mingle with wide-eyed first timers. The event has become so popular that race newbies have to win their entry through an online lottery. Previously held in November, the lottery will move to October as of this year. (More than 5,700 hopefuls entered their name in the draw for Half Corked 2019, so if you want to run in Half Corked 2020, make sure to check the website this October for lottery sign-up details.)

Last year, around 1,400 participants convened at Burrowing Owl just before 8 a.m., to be sent out in staggered heats of approximately 450 runners. The overall scene could best be described as controlled chaos: music blasting while racers fortified themselves with pre-race tastings of pinot gris and put the finishing touches on their elaborate costumes. Wild and wonderful get-ups are almost as big a part of Half Corked as the wine — those runners who forgo costumes for sleek athletic wear slink around looking contrite, aware that their obvious lack of imagination is on display. The lowest rung on the costume-effort ladder is the friend squads wearing rosé-pun tank tops accessorized with feather boas and Day-Glo wigs. From there, if you can fever-dream it, you’ll probably see it: Barbie dolls encased in to-scale pink Mattel boxes, an under-the-sea crew complete with a red-tressed mermaid in a fishtail gown, a team of synchronized swimmers in matching one-piece bathing suits and nose-plugs all running in unison within a blow-up kiddie pool with its base cut out.

By the time you hit the ground running it’s more than obvious that the Half Corked is less a race than a party. (“If you cross the finish line first, turn around and run back because you missed the entire point,” the 2018 race announcer gleefully declared as part of his welcoming remarks.) Any “running” that happens is secondary to an unbridled sense of fun. You can’t walk the whole race or you’ll be picked up by volunteers tasked with ensuring that everyone finishes within the 3.5-hour time frame, but you certainly do not have to run the whole way — some combination of jog-walk-shuffle will suffice in getting you to the finish line. Though heat can be a concern (temperatures nearing 30 C in late May aren’t uncommon in the region) there are shady spots and water stations along the route when you need them. And my particular fear that consuming multiple wines over the course of a three-hour run in hot, dry weather was a surefire way to induce severe heartburn, proved to be unfounded.

In fact, after loping into Oliver Community Park, site of the post-race celebrations with costume awards, food trucks (race admission includes a meal voucher that can be redeemed at the various trucks) and, of course, more wine-tasting booths, I found myself feeling, if not euphoric exactly, then at least unexpectedly energetic. Whether it was the joyous vibe, the ridiculous costumes, the gorgeous scenery of green vineyards nestled up against sun-baked rocky hillsides, the impossibly blue skies, or my steadily rising blood-alcohol level, I caught myself wishing that the course might have even been just a little bit longer so that it all wouldn’t be over quite yet — perhaps the ultimate indication that the Half Corked is no ordinary half-marathon.

The 2019 Half Corked Marathon runs May 24 to 26, oliverosoyoos.com/half-corked-marathon/

Located up on a ridge on the Osoyoos First Nation overlooking Osoyoos Lake, Spirit Ridge Resort (now managed by Hyatt International) is a desert oasis, with condo and villa-style accommodations, pools for both family and adult guests and expansive patios for outdoor dining. The resort’s on-site winery, Nk’Mip Cellars, is the first Indigenous-owned winery in North America.

Winery touring in the Oliver-Osoyoos region is the de rigueur daily activity, but certain wineries offer more in the way of food beyond palate-balancing crunchy breadsticks. On the chill end of the spectrum, Rust Wine Co. on the Golden Mile Bench has a resident “grillmaster” on the payroll, who will create share platters of assorted meats and veggies for your group to enjoy on the hillside open-air patio. For something fancier, the award-winning Miradoro Restaurant at Tinhorn Creek, also on the Golden Mile Bench, dishes up “local, modern wine-country cuisine” for lunch, tapas, dinner and dessert. Try to get a spot on the 65-seat wraparound deck overlooking the South Okanagan Valley.

This article appears in the May 2019 issue of Avenue Calgary.