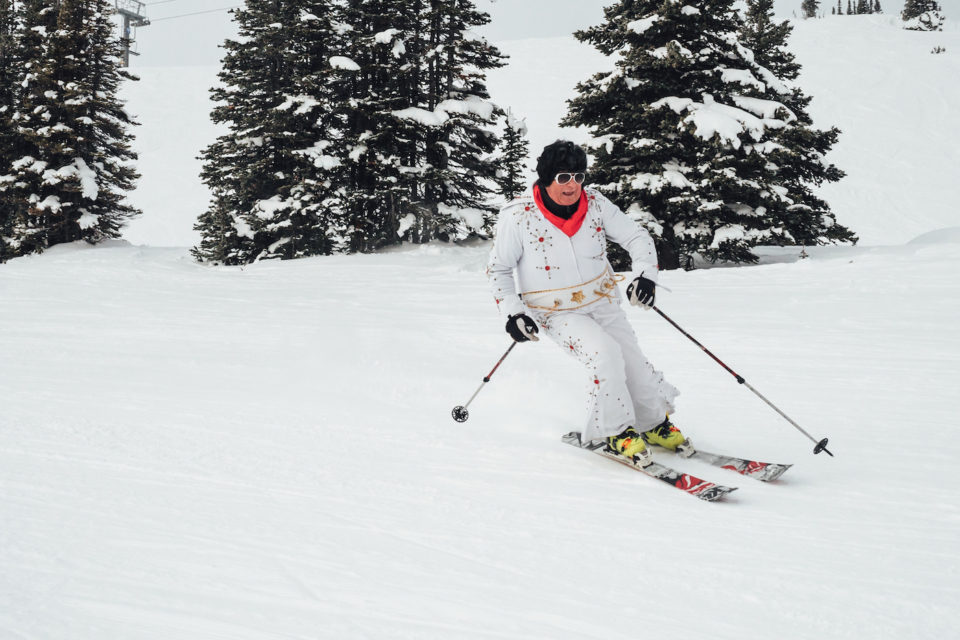 If you're dressed up as Elvis you can ski or snowboard for free at Sunshine Village on January 8, the anniversary of the King's birthday. Photo courtesy of Banff Sunshine Village.

Go Birding in the Crowsnest Pass

The birding committee of the Crowsnest Conservation Society is hosting its annual Christmas Bird Count in the region on Thursday, January 2. This will be the 14th count the group has done. The count will happen from 8:30 a.m. to 2 p.m. followed by a drop-in gathering in Blairmore where participants can share their results over a late lunch. The birding committee suggests participants come equipped with ice-grips for their boots as well as binoculars, a camera and bear spray. Call 403-563-7545 to be placed in one of the count groups.

Have the Whole Family Schooled in Snowmobiling in Fernie

The Elk Valley Snow Shepherds is a team of snowmobile guides and educators operating in the Elk Valley Region around Fernie, B.C. The Shepherds are presenting a number of clinics in snowmobiling technique and avalanche safety over the winter of 2020, including a Youth and Family riding clinic on Saturday, January 4. The day will cover a range of topics, including basic (and age appropriate) knowledge of terrain hazards, how to use safety equipment, what to do if you get lost or stuck in the backcountry and riding techniques such as throttle control and counter-steering. The Snow Shepherds will also do private youth coaching on request.

Dress Up Like Elvis and Ski for Free at Sunshine

Banff Sunshine Village is bringing back its annual tribute to the King by offering free skiing/snowboarding to those dressed up as Elvis Presley on January 8, the anniversary of Presley’s birthday. You’ll have to put in the effort to get the free lift ticket. But if you do manage to get a legit costume together, then make sure you’re on the hill for 11 a.m., so you can join the other Elvises at the top of the Strawberry Chairlift for photos and a group ski run. Sunshine will also be serving Elvis-inspired food and playing the King’s classics that day.

Lake Louise was named after Princess Louise Caroline Alberta, the fourth daughter of Queen Victoria. If her Royal Highness was alive today, she’d probably be happy to know that there is a series of women-only lessons at the alpine resort that bears her name. The Ladies Day 2020 ski program kicks off on Wednesday, January 8 and Thursday, January 9, and runs weekly for either six or nine weeks. The program registration comes with a range of discounts on additional private lessons and food and beverage, as well as social events such as a wine-and-cheese and (for the nine-week program) springtime après-ski events. There’s also the option to purchase discounted lift tickets for the program if you’re not a Louise pass holder, as well as return bus transportation from Calgary.

Jasper in January is an annual winter celebration in Jasper National Park that runs this year from January 17 to February 2. The everything-for-everyone format covers a range of events: indoor and outdoor, free and ticketed, daytime and nighttime, adult-only and family-friendly. January 25 looks like a particularly good day to be there, with a free evening street party in the heart of town featuring DJ superstars The Funk Hunters as well as food, games and an ice bar.

The Tribute Craft Spirits Celebration running January 15 to January 26 is a showcase for craft distilleries from Alberta and B.C., with special cocktail menus at various restaurants, lounges and bars within Banff National Park. The Celebration culminates with a two-day outdoor tasting experience on January 24 and 25 in downtown Banff. You can search up events by venue or by spirit (look for Calgary-made flavours from Confluence and Burwood) on the festival’s website tributetocraft.com.

On the topic of craft spirits, après-ski at Norquay has been enhanced by the addition of a new cocktail menu in the Lone Pine Pub at the Cascade Lodge. The new menu features the winners of a cocktail competition Norquay hosted, in which 12 local bartenders were challenged to create a drink something using four ingredients and at least one spirit from the local Park craft distillery in Banff. Try the Hut Chocolate, which combines Park’s maple rye and Bird’s Eye chili vodka with a toasted-marshmallow syrup.

Get Snowed In with Some Comedians in Golden

The Snowed In Comedy Tour is now in its 12th year of bringing comedians to venues across Canada. (They’ve also done shows in Australia, Europe and the U.S.) This year’s lineup features Just For Laughs winner Dan Quinn as well as Canadian Comedian of the year nominee Pete Zedlacher. The tour will touch down in Golden, B.C. on Wednesday, January 29 at the Rockwater Bar & Grill. Tickets are $40.

5 Horror Films with Connections to Calgary

How to Travel in the Mountains This Fall