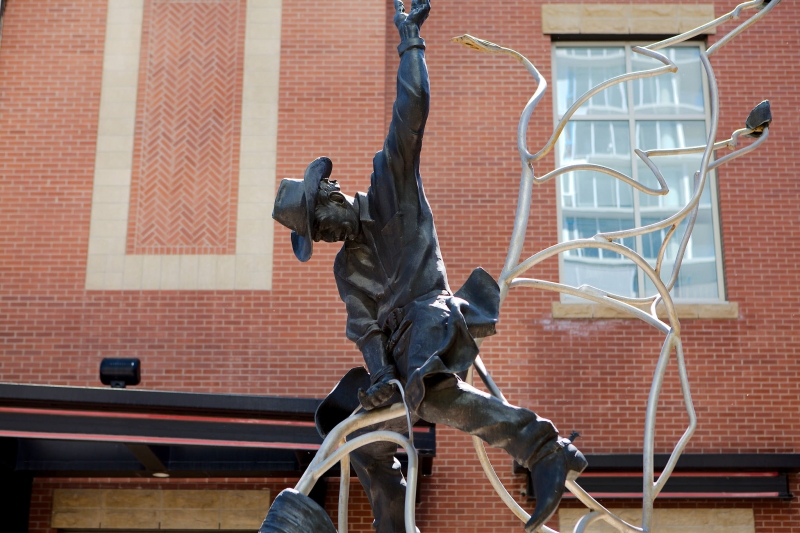 The Ride, one of two low-and-high relief sculptures installed in 2008. Photo By Reg Tiangha.

Much like Christmas, Stampede season comes but once a year but its spirit is one we should keep alive the whole year round. Tammy Yamkowy, chair of the Calgary Stampede Public Art Committee, is working to do that.

“A lot of people know about the 10 day Stampede in July, but more people have no idea that the Stampede is a part of the community 365 days a year,” says Yamkowy. “Public art is one of the best ways for people to engage with the Stampede outside of the 10 days.”

The Calgary Stampede has created so many public art pieces over the years that they constitute their own art walk. There is programming throughout the year to learn more as well as an online art walk map for self-guided tours anytime.

Here are the stories behind a few of the pieces you’ll find on the Stampede Art Walk.

Installed outside the Stampede grounds, Joe Fafard’s “Do Re Mi Fa So La Ti Do” consist of steel cut horses running through the park just west of the courthouse. The eight different horses each tell a different story about harmony across Canada. “What’s special about those is that we gifted Quebec city with the same horses for its 400th anniversary,” says Yamkowy. “They have theirs running on Champlain Boulevard by the airport.”

Outlaw the bull was the first Calgary Stampede piece installed in downtown Calgary. He’s one of the greatest athletes to perform at the Calgary Stampede. He was only ridden once for the full eight seconds, and bucked off every other rider. “We wanted to do a play on the bull of Wall Street,” says Yamkowy. “So we have our bull in Calgary in front of the Stock Exchange Building.”

“By The Banks Of The Bow”

“By the Banks of the Bow” speaks to how horses helped settled Western Canada and the Calgary area specifically, as well as the evolution of the horse in the west. “When the first ones came, they helped break the land, helped build things and helped feed us. Then they evolved to racing and rodeo events,” says Yamkowy. “Each horse in the 15 named horses and two riders represents a piece of horse history.”

This piece is a celebration of the Stampede’s centennial in 2012, recognizing all the great Stampede competitors in rodeo and in chuckwagon racing. Each stylized horseshoe represents a different event with the names of all the winners, which allow for some interesting family histories to be traced through time. “Everyone knows in chuckwagon racing there’s the Glass family, and it’s not just one generation, it’s two or three,” says Yamkowy. “You see all the brothers and nephews and uncles, so it’s kind of neat to see how these are family events.”

Installed in 2008 when the new Stampede Casino opened, both “Courage and Thunder” and its sibling “The Ride” were created by married sculptor couple Veronica and Edwin Dam de Nogales. “It’s a low and high relief work, as they called it,” says Yamkowy. “They were paying respect to signature items at the Stampede, so in their minds bull riding and the chuckwagons are what they think of when they think of the Calgary Stampede.”

The recently unveiled “Rainbow Trout”, seen here with creator Jeff de Boer, Stampede Queen Maggie Shortt, Princess Bailee Billington and Princess Chelsey Jacobson, pays homage to the eco-system, fauna and the Elbow River that it lives next to. “We wanted to show a different side of the Stampede,” says Yamkowy.

6 Horror Films and Shows with Connections to Calgary