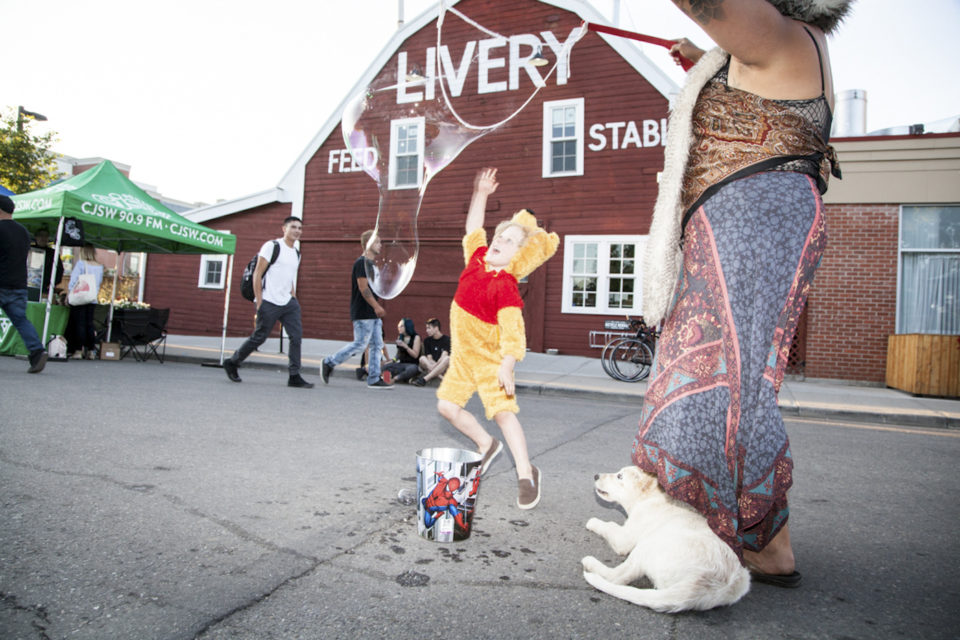 Many Calgarians have a sacred, annual tradition that takes place as spring eases into summer. Cries of “I don’t know these bands!” and “This makes me feel old” ring out on the internet while pleas of “book The National” and “we want Robyn” reverberate out into the Rockies.

These folks might be missing the point of what Sled Island Music & Arts Festival is, but it would be harsh to turn your nose up and blame them. Sled is a unique concept extremely far-removed from, say, Coachella or Osheaga.

The 13th annual Sled Island and Music Arts Festival will host more than 240 musical acts from the city, across the country and around the globe, most of which are still in the emerging stage of their careers. To some, it’s an enticing proposition to thrust headlong into the unknown and spend the better part of a week soaking up new sounds. For others, it feels confusing and like they aren’t the target audience for the festival.

If you identify as the latter category, bear with us for a bit and you might just change your mind.

Sled Island calls its most popular admission option a “discovery pass.” Indicative of the festival’s spirit, discovery should be fun, illuminating and shared with friends. What it really comes down to is finding a comfortable entry point that feels natural to you. From there, the idea is that great music and art will simply reveal themselves to you.

Here are seven entry points that are more toe-dip than nosedive to get you started. Whether you go with a discovery pass, the deluxe “plus” version, advance tickets, walk-ups or the new day passes being offered is up to you.

A smart strategy for tackling Sled Island’s music programming is to start with its guest curator’s list of contributions. Each year, the festival entrusts a portion of programming input to a vital voice in music. This year, it’s Julien Baker, a deeply affecting singer-songwriter from Memphis who tackles heartbreak, faith and queerness in her music. Don’t take our word for it — The New Yorker,  Rolling Stone and Village Voice (R.I.P.) all vouch for her. There’s a designated page to see her picks, which include hip-hop, punk, new wave and folk. Follow the hyperlinked names to read about them on their individual artist pages, which also have similar artist recommendations and clickable genre tags that will take you to all acts in the various categories. Don’t have the time or patience for that? Just show up to see Julien Baker at The Palace Theatre on Saturday, June 22 — one of her curatorial picks is the direct support act.

Soak up the Sun at a Free Block Party in Inglewood

Sled Island isn’t a genre-specific festival. From metal to folk and jazz to electronic music, its no-rules approach to programming can be both exciting and daunting. Perhaps the easiest access point is the annual block party held in Inglewood at the corner of 9th Ave. and 9th St. S.E. (adjacent to Communo). It’s a free, outdoor event open to all ages (plus dogs). On stage, the programming is largely party-ready electronic music from DJs, but there are also singers, one rapper and campy R&B performer Har Mar Superstar. There will also be a beer and gin garden, a vintage market by Market Collective and food trucks. Want to arrive in style? There’s a Mad Max-themed bike convoy departing for the event from Olympic Way and 12th Ave. S.E. at 1 p.m.

When in Doubt, Just Go to the Legion

Opened in 1922 in recognition of soldiers who fought in the First World War, Royal Canadian Legion No. 1 has a certain kind of frozen-in-time magic you can feel and smell (in a good way) within a few seconds of stepping foot inside. In the profile printed in Avenue‘s June 2018 issue, Sled Island’s executive director named shows at the venue a quintessential festival experience. There’s a stage on both the main level and upper floor, with sets timed so that there’s never dead air. If your ears do need a break, there’s plenty of seating and art exhibitions on view in the basement and top-most floor. The Legion has a reputation for hosting many of the festival’s most coveted headliners, meaning you’ll find both ravenous music fans and people who simply followed the buzz. Put simply, it’s the social hub of the festival. If you don’t like what you hear, you’re mere moments away from venues like the Central Library, King Eddy, Studio Bell Performance Hall and Palomino.

June 21 is a nationally recognized day to celebrate Indigenous heritage and culture. In observance of this, Indigenous Resilience in Music, Sled Island and National Music Centre have teamed up to offer music and educational programming at the King Eddy and inside Studio Bell. This includes the Isitsiipotaako Public Workshop where two artists-in-residence will demo new works and speak, a screening of the documentary A Love Letter to My Unborn Child and two four-band-bills at King Eddy and the Studio Bell Performance Hall. This partnership intersects with National Music Centre’s Indigenous Music Week.

Five different Sled Island venues have primo patios and one of them has entertainment quite literally on deck. Head to Broken City’s mural-adorned rooftop patio if you want to get sunshine beers and tunes in the same place. Or, head to the Ship & Anchor, Pin-Bar, The Palomino or the King Eddy if you prefer to keep your music and al fresco beer guzzling separate. Other outdoor options are concerts at Central Memorial Park and the aforementioned Sled Island Block Party.

Flash That Pass and Save Some Cash

Who doesn’t love deals? A Sled Island pass gives you discounts at more than 80 local businesses. Everything from clothing stores to hair salons and restaurants to grocery stores are offering perks. We suggest heading to Tea House for a Sled Island comedy show to enjoy 10 per-cent off your bill, then getting that same discount on late night pizza at Una Pizza + Wine. If festival life is wearing you down, there are two different yoga studios where you can attend unlimited free classes from June 17 to July 1. Aside from these community partner discounts, there’s an annual $5 beer-and-hot-dog combo at Tubby Dog, a free barbecue lunch at the Palomino (included with show admission) and free, vegetarian snacks galore at the Mint Records Day Party.

Forget About Music For a While

Focusing on just music at Sled Island is like going to Disney World and only going on the Tower of Terror. There are five other programming streams beyond the bands: comedy, film, art, conference and the slightly amorphous special events category. There will be two comedy shows, two feature-length films and two short packages, 12 different art shows and then everything from yoga to punk rock bingo. Some events are free while others can be accessed with advance tickets, a pass or paying cover at the door (subject to venue capacity).

Sled Island runs June 19 to 23 at dozens of venues in Calgary. Keeners can start early during the festival’s soft launch day on Tuesday, June 18.