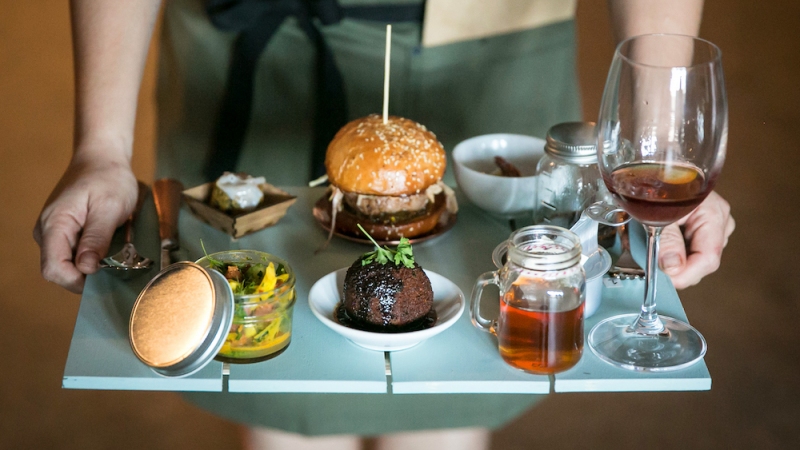 Cochon555 is a culinary competition that started in the U.S. where chefs try to make the best preparations of heritage-breed pork (which event-goers then get to taste!) It's happening for first time in Canada on April 28, 2018 at the Fairmont Banff Springs. Photo courtesy of Cochon555.

Do Easter Brunch at the Top of the Banff Gondola

The Northern Lights Caf at the top of the Banff Gondola is offering a special Easter brunch over the weekend of Friday, March 30 to Sunday, April 2. The $79 price gets you gondola admission and a spread that includes an Easter ham carvery station as well as other brunch items and dessert stations. Brunch is served between the hours of 11:30 a.m. to 3:30 p.m. The gondola departs from the base of Sulphur Mountain in Banff.

Indulge in a Food-and-Wine Weekend in Cranbrook

St. Eugene Golf Resort and Casino in Cranbrook B.C. is hosting its second annual WineSpring Festival over the weekend of Friday, April 6 to Sunday, April 8. The festival lineup includes a five-course plated dinner with pairings of Okanagan wines on the Friday evening and a wine-tasting event with food stations and unlimited tastings from over 50 participating wineries on the Saturday night. The festival also features classes and seminars, a pop-up wine store and a Sunday morning bellini brunch. To purchase single-event tickets or festival packages call 1-866-292-2020.

Practice Mindfulness in a Cave

If you want to add another level to your meditation practice, consider getting mindful deep inside the earth (on Friday the 13th no less!) Canmore Cave Tours, known for doing music shows in caves, is presenting unEarthed Mindfulness: Inner Mountain Meditation on Friday, April 13 from 5 to 10 p.m. Tickets are $130 per person; call 403-678-8819 to reserve.

Enjoy Dinner and a Show at Mount Engadine Lodge

Mount Engadine Lodge, an alpine inn located just off the Smith Dorrien Trail that links Canmore with Peter Lougheed Provincial Park in K-Country, is presenting Music In the Meadows on the evening of Saturday, April 14, a dinner event with music by folk duo The Raven & The Fox. Tickets for the event are $100 per person (reservations required). You’ll likely want to stay overnight at the lodge afterwards, so best to book a room, too.

Most alpine resorts have a blow-out bash to celebrate the end of the winter season. Fernie’s is the two-day Fernival which includes free outdoor concerts up on the mountain in the main plaza. Sloan is headlining on Saturday, April 14 and ski-hill warriors BC/DC close things out on Sunday, April 15.

Kicking Horse Resort in Golden, B.C. is sending things out with a Slush Cup and pig-roast party on the afternoon of Sunday, April 15. If you’ve never been to a slush cup before, the format basically sees skiers and snowboarders trying to get as much speed as they can down a runway slope in an attempt to then skim across a slushy, ice-cold stretch of water. Obviously, not everyone makes it across, which is the fun part (for the spectators).

Here’s one for the snowboarders out there: Lake Louise in partnership with Burton is staging a banked slalom snowboard race on Saturday, April 21 in Grizzly Gully. Banked slaloms, in which riders compete for the best time down a curved track, have long been part of the grassroots snowboarding community. The registration fee for The Gully is $20 and all ages are welcome to compete.

Pig Out at Cochon555

Cochon555 is a competitive culinary tour in which five chefs are each given an ethically raised heritage-breed pig, with which they try and out-cook each other. Cochon555 has been running in the U.S. since 2008 and will make its first foray into Canada on Saturday, April 28 with an event at the Fairmont Banff Springs hotel. Among the invited chefs at the Banff event are Mattias Fong from River Caf and John Jackson and Connie DeSouza of Charcut. Ticketholders get to sample the 25-plus preparations of pork and help pick the winner, who goes on to compete at the finale in Chicago. Tickets ($129 general admission; $189 VIP) include wine, craft beer and spirits as well as an artisan cheese bar, tartare bar and dessert bar.

Technically, this isn’t happening this month, but Aussie musician Xavier Rudd has a huge following among the mountain-culture community and tickets for his outdoor show at the Banff Centre’s Shaw Amphitheatre on Saturday, June 16 will get snapped up fast. Get yours online at from the Banff Centre box office if you want to be there, too.

And check out these mountain-themed events happening in Calgary

Hear Tales of Mountain Adventure Over Beers at Trolley 5

Mappy Hour events are gatherings for outdoor enthusiasts to peruse maps and guidebooks and hear adventure stories over beers. The next MappyHourYYC event, “Tales from the Trails,” is happening Tuesday, April 17 starting at 6:30 p.m. at Trolley 5 Brewpub. The lineup of presenters includes Calgary-based endurance adventurer Laval St. Germain, who in 2016 set a world record for rowing solo across the Atlantic Ocean. Tickets for MappyHourYYC: Tales from the Trails are $5, available in advance through showpass.com.

Banff Sunshine is bringing a taste of snowboard freestyle culture to downtown Calgary on Thursday, April 26. The Downtown Throwdown will see the resort pile a bunch of snow on Stephen Avenue (three tonnes to be exact) with snowboarders showing off skateboarding-inspired rail tricks and other manoeuvers.