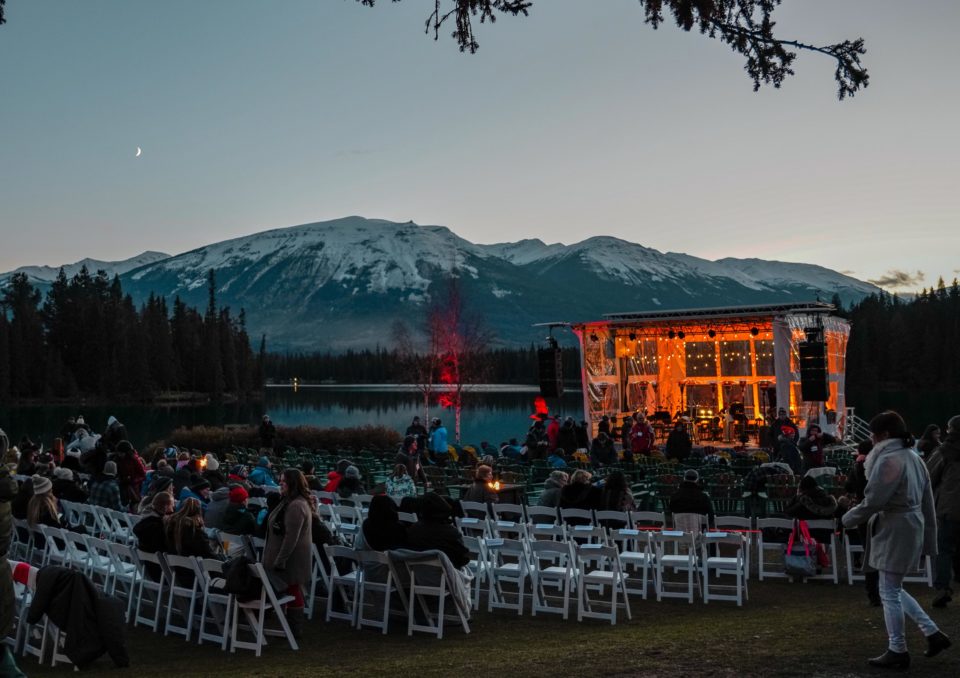 You'll need lots of warm clothes and blankets but it's worth it to see the Edmonton Symphony Orchestra play an outdoor concert on the shores of Lac Beauvert at the Fairmont Jasper Park Lodge. Symphony Under the Stars is part of the Jasper Dark Sky Festival celebrating the region's status as an International Dark Sky Preserve. Photo courtesy of Tourism Jasper

Show Your Pride in Banff

Banff is hosting Pride Week from October 1 to 6 this year. The big signature party is a drag show featuring Misty Meadows, Visa De’Klein, Perla Coddington and Abeiya Miraj on the night of Friday, October 4 at Wild Bill’s. Tickets are $20 through Showpass. Along with the start of Pride, October 1 also marks the opening of Banff’s first Cannabis store, Spiritleaf Banff.

Hang Out with the Association of Canadian Mountain Guides in Canmore

The Association of Canadian Mountain Guides (ACMG) is hosting a mountain expo and used-gear sale on Saturday, October 5 at the Canmore Nordic Centre. The expo part will feature a series of backcountry clinics on how to make safer decisions and deal with outdoor emergency situations in the mountains. There will also be information on how to become an ACMG guide yourself. The clinics run from 11 a.m. to 3 p.m.; the gear sale (cash only) runs from 10 a.m. to noon. Entry to the event and the clinics is free. Later in the evening, there will also be a free screening of mountain films.

Get Lost in a Haunted Corn Maze in Golden

Nothing says “autumn” like a corn maze. This year, check out the one at the Columbia Wetlands Outpost, an event site near Golden, B.C. (2581 Highway 95). The maze will be open weekends from October 5 to 19, from 11 a.m. to 5 p.m., with a special Haunted Corn Maze event on the evening of Saturday, October 12. (starting at 7 p.m.) The maze will also be open on Saturday, October 26 from 11 a.m. to 3 p.m. during the tractor pull and lawnmower races taking place that day.

The Canmore International Improv Festival kicks off Thursday, October 10 and runs through Saturday, October 12. On Friday, Oct. 11, Norwegian troupe Det Andre Teatret is doing a show called Throwaway, where audience members bring in stuff they were intending to get rid of and the performers create improv pieces based on those objects. The festival is also bringing in performers from New Zealand, as well as local improv artists. Shows are at artsPlace in Canmore. Tickets are available for individual events, or you can buy an all access pass, which gets you into all the evening shows as well as free beer at the opening night party.

Scurry With Scarecrows in Bragg Creek

The annual Bragg Creek Scarecrow Scurry fun run is happening this year on Saturday, October 12, with check-in starting at 9 a.m. and race time at 10 a.m. Participants dress up like scarecrows (not super scary ones though…) and choose either the one-km or five-km distance. The run costs $25 to enter with proceeds donated to Easter Seals Camp Horizon, a camp for individuals with physical disabilities and medical conditions. Registration is open to runners of all ages and dogs are welcome to run with their owners. There are prizes for best adult, child, dog and group costumes.

Do Oktoberfest at the Griz in Fernie

The Griz Bar at Fernie Alpine Resort is known as one of the all-time great après-ski bars, so you can imagine they’d throw a pretty good Oktoberfest party. Dig out the dirndl and lederhosen and join the fun on Saturday, October 12. Tickets are $49.95 for the evening event, which features a dinner buffet, a live oompah band, a yodeling contest and a take-home glass beer stein.

Experience Symphony Under the Stars in Jasper

The Edmonton Symphony Orchestra is doing two outdoor concerts on the shores of Lac Beauvert at the Fairmont Jasper Park Lodge on Friday, October 18 and Saturday, October 19. The performances are part of the annual Jasper Dark Sky Festival that celebrates the region’s status as an International Dark Sky Preserve. Doors are at 7 p.m. with concerts beginning at 8 p.m. Tickets are $119 per person for concert only, or $199 with a three-course dinner.

See Reuben and the Dark at the Banff Centre

Former Calgarian Reuben Bullock and his band are doing a pair of shows this month, Friday, October 18 and Saturday, October 19 at the Banff Centre. The 246-seat Margaret Greenham Theatre offers local fans a much different experience than the Coca-Cola Stage at the Stampede, where Bullock played back in July.

Go to a Block Party on Banff Avenue

The Banff Centre Mountain Film and Book Festival has been drawing luminary mountain adventure authors and filmmakers to Banff since the 1970s. This year’s festival is launching with a community block party on Friday, October 25, from 6 to 10 p.m. on Banff Avenue at Buffalo and Caribou Streets, featuring product demos and live music. The festival runs October 26 to November 3. Among this year’s featured presenters is Canmore-based Sharon Wood, who in 1986, became the first woman from the Western Hemisphere to summit Mount Everest, a feat she accomplished without Sherpa support.

13 Best Things to Do in Calgary This April