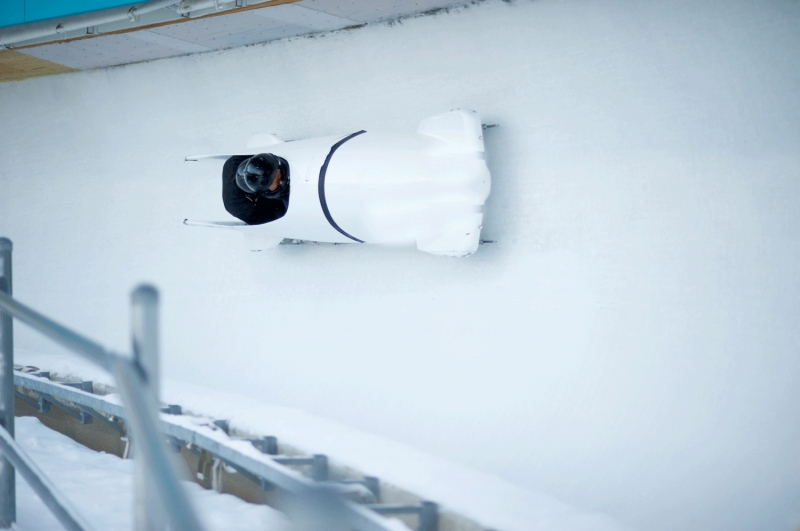 It may have taken the athletes a lifetime of training to get on the ice rink, luge track or ski trail in Pyeongchang, South Korea for the Winter Olympics. Here in Calgary, access to Olympic venues is for elite athletes as well as everyone who pays the price of admission. We are one of the few cities in the world that has kept its venues in competition shape with access to the public.

Here is where you can try your hand at an Olympic sport in places where Olympians have recently tread.

The bobsleigh goes fast. Really fast. Olympians exceed 150 km/hour. The slightly slower, public bobsleigh rides at Winsport go up to 100 km/hour. You’ll feel up to 4 Gs of force as you go down the track and through 10 turns. Don’t worry though, you don’t do it alone. An expert pilot takes you down the track and each sleigh fits three people plus the pilot. We tried it and it is not for the faint of heart (or anyone with neck issues). From now until the end of the Olympics of February 25, new bobsleigh bookings are buy one get one 50 percent off.

A ride on the bobsleigh is $169.99 per person. You can also bobsleigh in the summer.

You’re on your own down the luge track, but you’ll be okay – riders are equipped with a helmet and some extra padding. A coach will tell you what to do before you take off for your 40 second ride. The luge goes through five turns and reaches 60 km/hour. Dress warm, but leave your puffy jacket at home.

Speed Skating at the Olympic Oval

How fast you go is up to you, but the Olympic Oval has dubbed itself the fastest ice in the world. When it was built for the 1988 Olympics, it was the first fully enclosed speed skating track and elite speed skaters from around the world still train here. The speed of the ice comes down to the demineralized water that reduces any dirt in the ice. It’s kept at a very specific temperature (between 2 and 7C) and thickness (about one inch). An extra big Zamboni smooths the surface and the humidity, temperature and air circulation of the Oval are carefully monitored.

When Olympians and other competitive skaters aren’t training or competing, the Oval is open to the public for skating. Check the schedule to see when you can access that smooth, temperature controlled surface. Regular admission ranges from free for kids five and younger to $7 for adults. Season passes are available and on Mondays you can skate between 6 and 8 p.m. for $2. There is also a skate shop where you can rent equipment, including helmets (which are mandatory).

A visit to Canmore will get you into the winter sport spirit. Olympians Chandra Crawford, Sara Renner and Beckie Scott all trained at the Canmore Nordic Centre, which includes facilities for biathlon and cross-country skiing. The centre has more than 65 kilometres of groomed trails, including 6.5 kilometres that are lit up for night skiing. The centre even stores snow over the summer to be spread on Frozen Thunder, its early season trail that opens in October.

You can rent skis and take classic and skate skiing lessons through Tail Sports. Day passes are between $9 and $15 and season passes are available.

If you want a taste of multiple sports in one place, go to the Canadian Sports Hall of Fame. The 40,000-square-foot space has plenty of memorabilia and interactive exhibits. You can strap on a pair of long jump skis and attempt a landing or see what it’s like in goal for a 3D hockey practice. Summer Olympic sports to try include wheelchair racing against Chantal Petitclerc, shadow boxing with Lennox Lewis and pitching with Jeff Francis. And, if you just want to be among the Olympic glory, Marnie McBean’s gold medal winning oars, Melissa Hollingsworth’s Olympic race suit and Nancy Greene’s skis are all on display. Admission is $12 for adults and $8 for youth.

What to Do in the Mountains in July

Vote for Your Favourite Day Trips from Calgary

What to Do on a Day Trip to Bragg Creek