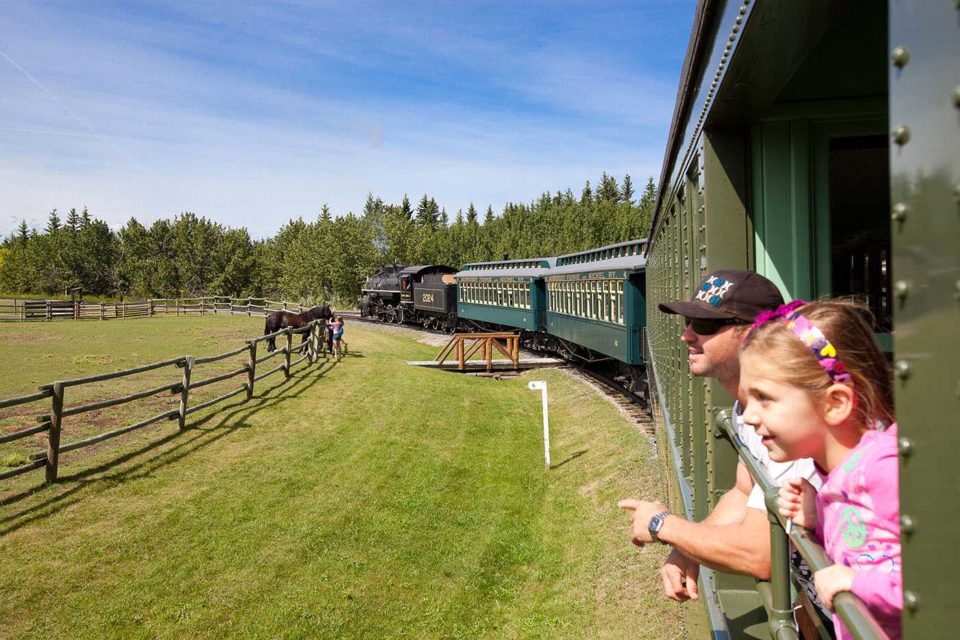 “When you pass the Famous Five house [near the entrance] you lose sight of the city and you enter a small town that’s still at one with nature,” says Heritage Park’s public programming coordinator Ellen Gasser. “It’s like it was in the early West. You can feel what it was like to settle in those natural spaces.”

Late at night, bobcats pad through the quieter parts of the settlement and mule deer doze in the yard of historic Thorpe House, while in the midsummer, young coyotes practice their yowls near the 1880s pre-railway settlement. Moose have even been spotted in the wetlands east of the parking lot where ducks and red-winged blackbirds are known to congregate.

In the poplar trees near the Canmore Opera House, you’ll see flashes of yellow feathers — yellow warblers (sometimes called wild canaries) were morale boosters for early settlers and continue to be a visual treat for contemporary nature lovers. Waxwings pluck berries from the mountain ash trees near the church, while Old Fort Road is a good place to look for woodpeckers. And the heritage gardens around Webster House and the west side of Calgary Town Hall 1885 are planted with species to attract butterflies and bees.

A trip aboard the paddlewheeler S.S. Moyie provides a closer look at the mergansers, ducks and geese that rest on the Glenmore Reservoir as well as the opportunity to catch a rare sighting of beaver or mink along the shore.

In fact, there is so much wildlife in the park, Gasser’s team is counting it. “We will do a species survey every couple of weeks this summer,” she says. The intention of the survey is to better identify the resident species before construction of a natural resource centre and formal nature trail at the park.

Heritage Park Historical Village is open 10 a.m. to 5 p.m. daily until Sept. 2, then weekends only until Oct. 14, heritagepark.ca