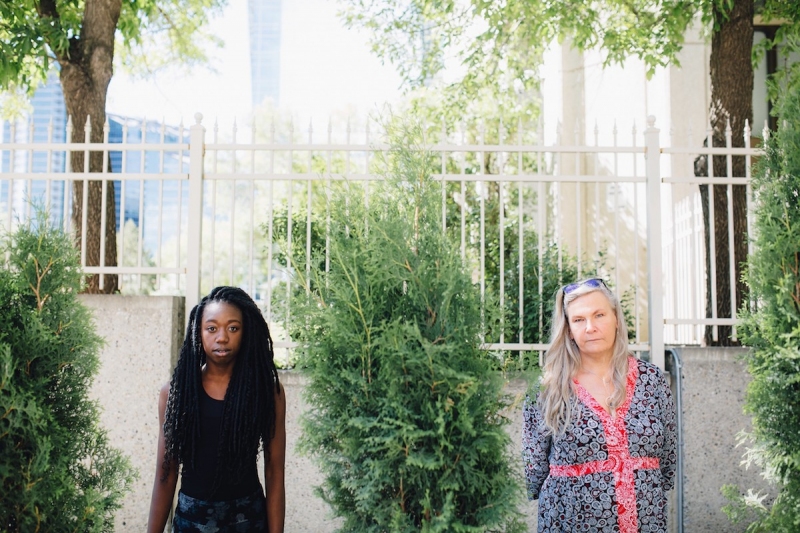 The artistic trio of director Jenna Rodgers and performers Valerie Planche and Makambe K. Simamba will unleash their adaptation of Winners and Losers at the Engineered Air Theatre this November. The play’s structure is simple: two women sit at a table and debate people, topics and ideas that fall into the binary of winner and loser. Each woman takes an opposing perspective.

This Calgarian, all-female adaption comes from the original, Governor General’s Award-nominated work by Marcus Youssef and James Long and takes on a feminist twist by nature of the ensemble’s personalities. Winners and Losers is ripe with humour but also gradually reveals hidden truths about its characters, eventually testing the limits of friendship and our ingrained beliefs.

Produced by Chromatic Theatre, Winners and Losers runs in association with Swallow-a-Bicycle Theatre and Arts Commons Presents from November 15 to 25, with pay-what-you-can admission previews on November 13 and 14. Tickets are available now.

To get a firsthand look at what’s in store at the show, Avenue got Planche and Simamba on the phone for a lightning-round test of their debate skills. The results are hilarious, bizarre and at times revealing. The following excerpt has been edited for length and, in a few cases, vulgarity.

VP: “Okay, loser. Because why don’t you just call it a veggie sandwich? It’s not a burger. Like, a burger is beef. A burger is a beef burger with pickles, onions and whatever else, like cheese. It’s like, you have veggie cafes and I start thinking of comfort chickens that you take on planes. It is too much.”

MKS: “Okay, okay, but hey, I’m just saying that just because we live in Alberta [pronounced as Alberter], that does not mean that we have to live the life of this AAA Angus beef every day and night of the week.”

MKS: “What should it be called then?”

MKS: “But that sounds so bad.”

VP: “I’m going to claim loser because I’m still trying to get used to [expletive] waffle chickens. Chicken and waffles. I know I’m probably old, you know, but chicken and waffles, I don’t get.”

MKS: “Here’s the thing: we’re living in the age of convenience, are we not? This is the time of Wal-Mart, where you can get everything in one place. You know what I’m saying? It’s like, Canadian Tire, you can buy more than just Canadian tires. You could buy a pot. You could buy…”

MKS: “Hey! Give me time. I’m getting there. We all benefit from the fact that you can go to a gas station and also get some taquitos. Nobody’s complaining about that. I’m feeling like why not flip this same idea into our breakfast? Therefore, why not have a little bit of waffles as the bread for your breakfast sandwich? Is this not Canada? Is this not 2018? Can we not live our best lives? I don’t want to live in a world where a waffle and the insides of a breakfast sandwich can not come together in holy matrimony, ladies and gentleman!”

The “Justin Bieber Method” of Eating a Burrito

VP: “It’s fake, by the way. We have some Justin Bieber lookalike and… Brazil just had a brutal election that’s going to decimate, you know, democracy in that world. And, we’re talking breakfast burritos eaten by some dude, Justin Sweatpants?”

MKS: “Why do you have to speak that way about J-Biebs? How did he hurt you? He’s a good person. He’s just a little confused right now. But we still like him, right? I’m looking at this picture of [pause] a white man. He’s eating some kind of food item but not from the place where you’re supposed to eat it. Not only is it messy, but like…”

VP: “Thank God he has holes in them jeans because at least he can wash his knees. You know, it’s like, I don’t know what to say about that.”

MKS: “Oh my gosh, if ever there was a reason that I’ve had to win… You see, as a daughter of immigrants, we came to this country so that we could be happy with pineapple, you know what I’m saying? Pineapple on a pizza is just beautiful. It’s so delicious. There’s so many options. It’s actually quite a diverse way to eat a pizza, right? Because there’s two options: you can have pineapples on a pizza or just eat it the way it was intended by the gods. Or, you can order pizza with pineapple — and thank the heavens for the fact that you could do such a thing then — and choose option three by removing the pineapples from said pizza and then eating the pizza. You get a little bit of pineapple flavour, but not too much. You have options! Winner.”

VP: “Okay, loser, because the gods who made pizza were Italian. So the gods of pizza never put pineapple on pizza. I mean crispy bread dough, various great cheeses, a white pesto or a sauce that is tomato-based. You can have capicollo. You can have different meats. But, I am a purist. Pizza with pineapple is an aberration. It is a degradation of the joy that is pure pizza.

MKS: “Can we talk about how people be so goddamn codependent in society? Everybody needs a bae, everybody needs a bae — so now you need a costume bae, too? Like, no. Live your own individual life. You already hang out with this person all the time. You already scientifically start to look the same after you’ve spent a lot of time together. Why do you need to look the same on Halloween? And it’s not fair because then it’s like you’re two people but one costume? [If a couple goes as] Sonny and Cher or whatever, right, and I come by myself as Winnie the Pooh — because that’s a beautiful costume and it’s totally under-utilized for this generation — I feel like they get extra points because there’s two of them, but really it’s one idea, just two people. So we should only count them for 50 per cent of that creativity because they just did the same idea but with two bodies.”

VP: “I would say winner because I would be your Piglet. If you went as Pooh, I would totally be your Piglet. And, you know, I need a front or a back half of a horse or I need a hotdog for my bun——”

VP: “Right? I just think it’s a winner, and I think it’s ingenious. Somebody could go as an outpatient from a hospital and [the other person] could go as the saline drip bag. So I say winner. ”

Winners and Losers runs November 15 to 25 at the Engineered Air Theatre, Arts Commons. Pay-what-you-can previews are November 13 and 14. For more information and tickets, visit artscommons.ca.