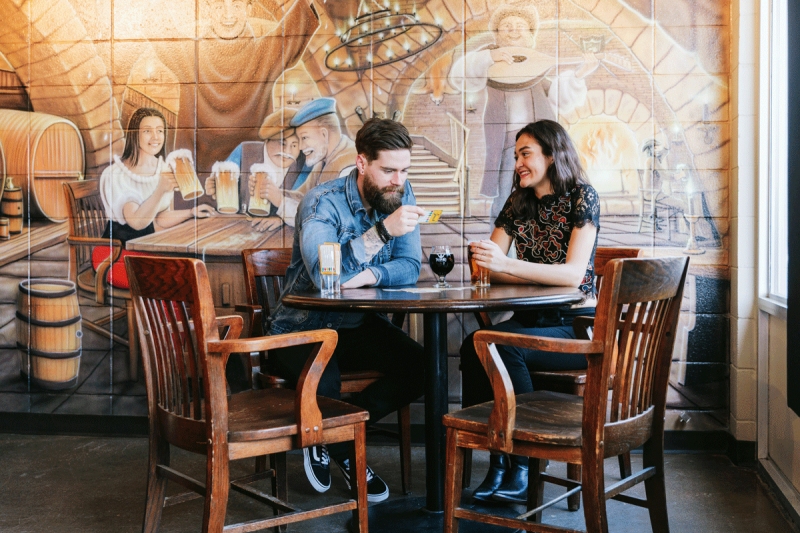 Troubled Monk brewery in Red Deer is one of the 2018 Breweries of the Year. Photograph by Chris Amat courtesy of Travel Alberta.

Since Ribstone Creek Brewery opened in 2012, its annual Christmas open house has become a big event on the social calendar of the east-central Alberta village of Edgerton.

The founders of Ribstone Creek started the brewery as a way of boosting the local economy, and the locals have embraced the company and returned the loyalty. Breweries like Ribstone Creek are opening all over Alberta and winning over the local population as well as the Alberta Beer Awards. In fact, just under half of the 69 winning entries at the Alberta Beer Awards came from breweries outside of Calgary and Edmonton. Blindman Brewing in Lacombe and Troubled Monk in Red Deer even tied for bronze as Brewery of the Year.

Although the current upswing in craft brewing seems strongly tied to a young urban market, given the industry’s connection to the agricultural sector, there’s a strong logic to breweries setting up in rural areas. And there are other advantages to a small-town setting as well.

When Jochen Fahr started his own brewery, Brauerei Fahr, he decided to locate in Turner Valley even though he lived in Calgary because the foothills reminded him of the countryside in southern Germany where he grew up. There, many small towns have a local brewery, many dating back hundreds of years.

Turner Valley appealed to Fahr’s sense of nostalgia, but he had practical reasons as well. While breweries in Calgary and Edmonton fought long and hard for zoning changes in order to set up in people-friendly neighbourhoods rather than industrial areas, Fahr’s proposed location just off of main street got a warm reception in Turner Valley.

“It took me less than two months to get a development permit,” he says. “Breweries are hip and town councils hope breweries will bring more people to town.”

Supplying their beers to retailers, pubs and restaurants helps small-town breweries extend their reach and earn followings beyond their local populations. Increasingly, their taprooms are destinations for urbanites out for a road trip and a chance to taste their favourites fresh from the source and sample exclusive, small-batch creations.

Blindman Brewing in Lacombe is a popular pit stop off the Queen Elizabeth II Highway. Since opening in 2015, Blindman has released a varied and uncompromising lineup of beers that includes sours, strong stouts aged in bourbon and wine barrels and traditional Belgian farmhouse-style ales. The closest thing to approachable, in a conventional sense, that Blindman brews is a session ale that’s an easy-drinking 4.4 per cent alcohol, but still comes packed with hoppy citrus flavours that would startle a Molson Canadian or Coors Light drinker.

The partners behind Blindman have roots in the Lacombe area and wanted to base their business there from the beginning. Co-founder Hans Doef says convincing customers to try something different, even when they’re your neighbours, is part of what they do. “It’s still a constant education, but we have a bunch of regulars in our taproom that’s growing. I’d like to think the trajectory of craft beer appreciation is going up,” he says.

Cole Boyd, a Ribstone Creek sales rep, has noticed a similar trend – as the brewery has expanded its offerings, it has ventured into more adventurous territory and some of the locals have joined them. “You have to do some trust-building, but once you gain their trust, the locals will come along for the ride … They’re making an effort to try new beers and expand their palates and it’s cool to see,” Boyd says.

In Lacombe’s charming downtown, there’s tangible evidence that brewers have reason to think positive. Local restaurant Cilantro and Chive is a craft-beer mecca offering about 130 craft beers at any given time and reserving its four taps for a rotating line-up of Alberta selections. This dedication earned it a nod from the industry as Restaurant of the Year at the Alberta Beer Awards.

Rieley Kay, who owns the restaurant with his wife Kim, says the occasional patron gets upset when they find out there’s no Bud Light. Kay’s strategy is to ask the customer what they like and offer them a craft alternative based on the answers – with a pledge to buy the beer if they’re not impressed. “We haven’t bought
a beer yet,” he says.

Even so, Kay says the craft beer culture in Lacombe still catches him by surprise. When Blindman Brewing provided a heavily hopped India Pale Ale for a cask night at the restaurant, Kay initially worried patrons wouldn’t enjoy it. Even among craft fans, the intense bitterness of a big IPA can be polarizing. But the restaurant patrons emptied the cask in about two hours. “We had a couple of 50- or 60-year-old ladies at the bar downing pints of it,” Kay says. “It blew my mind.”

The Growth of Hyper-Local Maltsters in Alberta