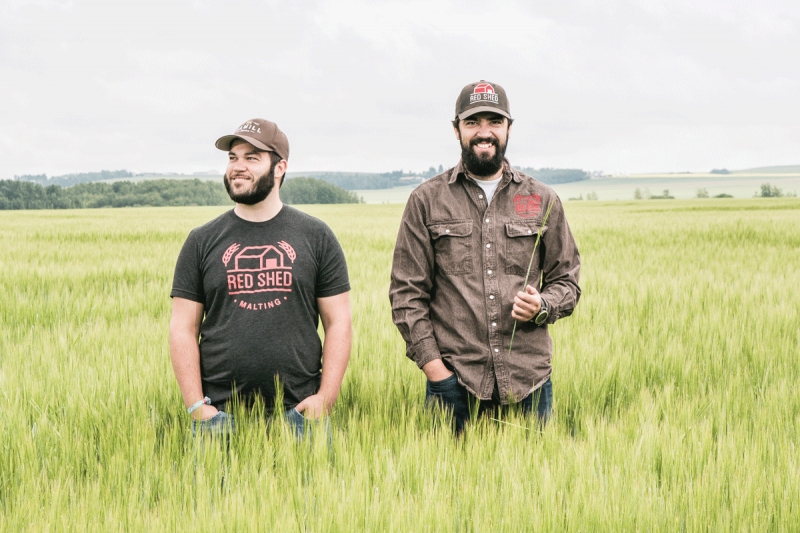 Alberta’s craft beers are getting more and more local, in the sense that a growing number of breweries mean more communities have a local brewer, but also in the sense that breweries are using more local ingredients. It’s something that’s reflected by the Alberta Small Brewers Association tag line “all the best,” which references not only the province’s great beer and brewers, but also its fresh water, malt and hops, as well as other ingredients.

One example of this growing localizing movement is Matt and Joe Hamill’s new business, Red Shed Malting. The brothers are fourth-generation barley farmers and first- generation maltsters. While both businesses involve barley, one is based on a market that existed when the Hamill family started its farm near Penhold in 1929, growing barley. Demand for the other – locally sourced specialty malts for local breweries – didn’t exist until the recent growth of craft brewing here.

The Hamills started Red Shed in 2014, a year after AGLC abolished its minimum-production quotas, which had stifled craft brewing in the province. Now the Hamills are part of a nascent grain-to- glass economy springing up around the province’s booming craft beer industry – a small, but growing group of malthouses and hop growers looking to put even more “local” in local beer. “Being able to grow great malt barley came first. But would Red Shed have existed before the Alberta craft industry? Not a chance,” said Matt.

Malting – steeping grain in water, allowing it to germinate and then drying it in a kiln or roaster – prepares raw barley for making beer. Alcohol content, colour and flavour are influenced by the types of barley in a beer, how they’re malted and the quantities used by the brewer.

It follows, then, that brewers are particular about malt. Big companies have been malting for decades (and doing it well) but a local maltster has the advantage of working directly with brewers to give them each exactly what they’re looking for, Hamill says.

The Hamill brothers will next take their local vibe even further: they’re starting Hamill Brothers Brewing. When it gets going, it will be the second brewery started by maltsters in Alberta, following Origin Malting & Brewing in Strathmore, which, incidentally, won four Alberta Beer Awards including Best of Show in its first year of operation.

While barley has been a traditional crop for generations in Alberta, hops have not. The long-held view has been that Alberta’s growing season is too short to grow quality hops, but a newly formed group representing local producers is out to demonstrate otherwise.

Even within the context of Alberta’s young craft beer scene, the province’s hops industry is an infant: the Alberta Hop Producers’ Association formed in early 2017 and its 19 members have a total of 8.5 acres in production between them. To put that in perspective, an average hop farm in Washington state’s Yakima Valley is over 800 acres.

But Alberta’s beer industry continues to grow and consumer interest in buying local shows no sign of waning, notes Jason Altmiks, one of the owners of Hired Hand Hops near Morinville and vice-president of the producers’ association. Because of this, he sees all kinds of potential, coupled with the ability to look at the experience of established hop-growing regions and avoid their mistakes. “We can learn what works well, what doesn’t work well,” said Altmiks.

One Alberta brewery has taken local to a whole other level. For the past five years, Village Brewery in Calgary has used hops as well as botanicals and adjuncts grown in local community gardens and a few backyards to brew its Village Gardener. And the village has responded; last year almost all of the hop needs for Gardener were provided by Calgary growers.

The move toward localizing and finding a connection in the beer we drink certainly doesn’t surprise the Hamills. “People are pretty interested in the ingredients of what they consume,” said Matt. “We have a pretty good story to tell and we should be telling it.”