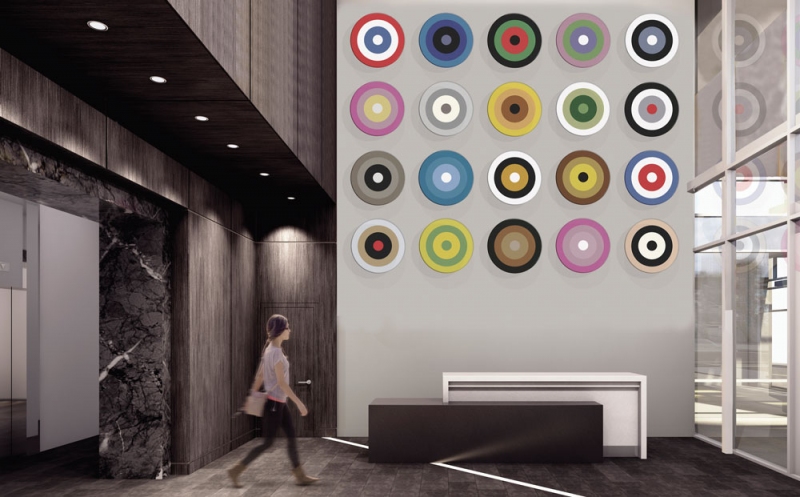 Rendering of the Mark On 10th lobby with "An Interpretation of Calgary, Alberta in the 21st Century," by Douglas Coupland. Rendering courtesy of Qualex-Landmark.

The spring of 2013 will go down in Calgary’s cultural history for an ephemeral artistic extravaganza known as “Wreck City: An Epilogue For 809,” when a block of homes slated for demolition in the inner-city community of Sunnyside got the ultimate send-off.

A grassroots collective of visual artists turned the block’s nine houses, three garages and one greenhouse into a series of immersive installations. Participating artists were each designated rooms where they could do whatever they could dream up, turning the homes into makeshift galleries viewers could walk through and experience. The established fact that all the homes were to be destroyed gave the artists a unique sense of creative free reign that came from knowing they wouldn’t be held financially responsible for putting things back as they were.

Over its nine-day run more than 10,000 people came out to see Epilogue For 809 – a number that far surpassed expectations. Three years later, it’s considered a bona fide creative triumph, an “I was there” cultural happening, and a shining moment for the visual arts in the city. It was a success by all accounts – from the artists to the organizers to Bucci Developments, the company that eventually razed the block to make way for its Ven low-rise condominium development, which is what you’ll find there today.

Amidst the nostalgic waxing and sentimental outpourings that Epilogue For 809 inspires, the developer tends to get overlooked. But the reality is that the entire glorious shebang hinged on Bucci giving its permission. Without the benefit of hindsight, it’s a marvel that they did. The liability and safety concerns of having the general public traipsing through old-model homes on the brink of demolition were multitude as was the niggling suspicion that the company was setting itself up to be skewered – that they would, in the words of vice president Mike Bucci, “lose the narrative.” But they went for it nonetheless. “It was a cool idea,” Bucci says. “At the end of the day, the pros far outweighed the cons.”

Among those “pros” is that by supporting the arts in this way, Bucci capitalized on a unique opportunity to engage with the community in which they were building (Bucci also kicked in a monetary donation of $2,500 via the project’s InvestYYC crowdfunding campaign). As a company that focuses exclusively on urban infill development projects, it faces the challenge of dramatically altering the landscape in full view of resident owners and businesses.

“Developers do not have an excellent reputation,” Bucci says. “The general public stigmatizes [us] and the reason for that is that we are agents of change. We change things. And nobody likes change … The arts are a bridge from us to the community. It’s a way for us to interface with them, to talk to them and to give them back something they can enjoy too.”

Another “pro” was the unique sense of place Epilogue For 809 provided the Ven project. Bucci commissioned professional photographs of Epilogue that now hang in the hallway corridors and foyer area of the Ven development. While the attraction of having a shiny and new condo is undeniable, the oft-cited downside about them is that they lack the “character” of older, heritage buildings. The Ven owners, however, get something of both worlds: shiny new condos with a story to tell.

In certain cases, the City of Calgary mandates that developers of large-scale projects include a piece of public art in their plans – Bucci Developments was given this mandate for its Xenex project in the Beltline, which resulted in a podium-mounted sculptural work depicting the energy of the city at the corner of 12th Avenue and 7th Street S.W. But it’s when developers go above and beyond fulfilling a City-mandated obligation that they open up the possibility of more meaningful community engagement and create a unique legacy.

It would have been much easier (and cheaper, no doubt) to have hung stock photography on the walls – those framed moody shots of Paris in the rain, perhaps – but the engagement with Wreck City created something more profound, something that Bucci, an admitted numbers guy in his three-generation family company, can definitely appreciate. “I don’t want to be a guy that just builds boxes of air in the sky,” he says.

While Bucci’s engagement with Wreck City had a grassroots bent, Qualex-Landmark, the developer behind the Mark On 10th condominium tower at the corner of 10th Avenue and 8th Street S.W. in the Beltline neighbourhood, took a more high-minded approach in their artistic engagement, commissioning a large-scale original work by luminary Canadian artist Douglas Coupland for the building’s lobby.

Titled “An Interpretation of Calgary, Alberta in the 21st Century,” the arrangement of 20 multi-coloured bulls-eye forms is, in Coupland’s words “a distillation of Calgary that is both part of the modern world, yet also eternal” and “a work that engages the viewer in an ongoing challenge to identify and remember what is depicted – almost like a chocolate box and its map.” According to Coupland, these forms “become signs that will, across time, mellow and ripen within a viewer’s memory, also acting as a smart and anticipated ‘welcome home’ moment.” Installed on the pristine wall of the lobby, it’s both an impressive work with an instinctive sense of place.

While Qualex-Landmark has several Vancouver projects featuring commissioned artworks in its portfolio, none have been to the scale of the Coupland commission, says Parham Mahboubi, the company’s vice president of planning and marketing. According to Mahboubi, the company was introduced to Coupland through a mutual colleague while Mark was in the early design phase and proceeded from there. “It quickly became apparent that the large-scale Coupland art piece was going to be an outstanding addition to the project,” he says.

There’s status inherent in having a gallery-calibre installation by a recognized Canadian artist in the lobby of your building, but the decision to go the extra mile was also seen as a way to engage with the burgeoning “Design District” area that Mark on 10th anchors. In a statement provided by Mahboubi, Qualex-Landmark president Mohammed Esfahani said that the company’s vision for Mark on 10th was “not only about the building, but also about the neighbourhood,” a sentiment echoed by the project’s lead architect, Foad Rafii, who said that “with the incorporation of the art piece as a central feature of the Mark lobby, we were not only contributing our part in promoting the arts in the emerging design district, we were also infusing a new energy and vibrancy into the building.”

It would have been much easier and more cost-effective for Qualex-Landmark to forego the commission, however, Mahboubi says the Coupland artwork was “one of several key selling points of the project,” which was completed last spring and is listed as sold out. “We have found that when the opportunity has arisen, introducing a unique piece of art designed by a reputable artist has so far been generally well received by homeowners and has been a positive contribution to the project and the neighbourhood,” he said.

If, as Bucci says, communities are naturally inclined to be suspicious and in some cases even antagonistic towards developers, the visual arts can help assuage those negative inclinations. “If the community has been engaged, whether its through art or other forms of social engagement, they become excited about what is coming rather than what is removed,” says Catherine Hamel, an Associate Professor in the University of Calgary’s Faculty of Urban Design.

The visual arts can be particularly beneficial when the development process involves tearing down something familiar. “If there is something important being removed, then maybe it can be taken into account [in the resulting art],” Hamel says. “I think it opens up a conversation, more of a productive conversation, to lay out more possibilities as to what can happen on the site, both in the destruction and the new possibilities, beyond being just a commercial project.” Artistic engagement can also serve to break down established barriers between the developers and the communities they are developing in. “We get into the habit of how we make certain judgements and create rigid boundaries and then you realize that these boundaries are a lot more fluid,” Hamel says.

It can be somewhat subversive for developers to engage with the visual arts as well, which is another way to break down barriers. Wreck City: Epilogue for 809 was, in many regards, a creative commentary on demolition and destruction, while Douglas Coupland’s writings and artworks are known to address the effects of contrived environments and disconnectedness. In both cases, the developers embraced projects that could be construed as a criticism of what they do. That said, a more failsafe move might not have produced something with the same depth of meaning. The maverick nature of Wreck City, in particular, was key to its brilliance and something more contrived would almost certainly not have resonated as loudly.

Mike Bucci says the company is open to doing more “Wreck Cities” should the opportunity arise. This past September, the company allowed Beakerhead to stage its “Beakernight” event on the site in Bridgeland that will eventually be home to the Radius project.

Bucci says the company tried to instigate a Wreck City-style project at a slated-for-demolition warehouse complex in Burnaby, however, the artistic community there didn’t embrace it the way Calgary artists did with Epilogue for 809. Recalling his first impressions of that project, Bucci remains awestruck. “That these guys had put so much effort and so much creativity into something that was going to be destroyed was kind of profound for us,” he says. “I felt like the first person that puts his pickaxe into the oil spout; we hit this reservoir of unbelievable creativity. I was just going, ‘why isn’t this always happening?’ This is so easy and so beautiful and so valuable, there’s no need to ever stop.”

[Correction: An earlier version of this story stated that Bucci Developments had provided $50,000 in funding for Wreck City: Epilogue for 809. The company actually contributed $2,500 toward the project’s InvestYYC crowdfunding campaign, but estimates a total contribution in the range of $50,000 when taking into account things like utilities, property taxes and site remediation.]

Some examples of visual arts and development mixing in Calgary

The interior of the Wreck City slide installation by Wayne Garrett and Caitlind r.c. Brown.