Calgary Versus London: Pubs and Tea

It turns out, you don’t necessarily need to jet off to London to enjoy two these two, very British gastronomical traditions.

Nottingham’s Pub and Restaurant in Calgary.

The two gastronomical traditions most closely associated with our colonial roots seem to represent opposite expressions of British culture. Taking tea in the afternoon feels upper-crusty. Stopping by the pub doesn’t.

The ritual of afternoon tea was reportedly popularized in the early 1840s by Anna Maria Russell, 7th Duchess of Bedford, although some research suggests it was already an established tradition by then. To stave off hunger before dinner, which was often served as late as 9 p.m., the duchess began requesting that tea, bread and cakes be brought to her room at 4 p.m., then started inviting friends to join her. The ritual proved popular and spread to London and other corners of the world.

The terms “high tea” and “afternoon tea” have become interchangeable. The term “low tea” has fallen out of use altogether. High tea was served in the late afternoon or early evening on the “high” or dinner table. Low tea, served on the low coffee table in the drawing room was served earlier, and thus christened “afternoon tea.”

These days, in North America especially, high tea is thought of as an upper-crust, fancy treat. But originally, high tea was for the working classes who couldn’t enjoy their tea until they got home from work and had it alongside a hearty meal at the dinner table. Low tea, on the other hand, was originally considered something that rich people enjoyed.

If tea retains the sniff of indulgence, the pub feels like your regular-folks place. From Dickens through Zadie Smith and even Harry Potter, the pub is central to an English neighbourhood’s heart.

In Calgary, our drinking custom runs more to hitting the bar for the hockey game or finding a lounge for a drink after work, and we “go for coffee,” not tea. Nevertheless, we have imported both traditions, in moderation, and made them our own. Our prices are better by half, and our pubs aren’t nearly as crowded. Our pubs and teas can’t compete for range of options or years on the block, and we’re not defined by them, but a pub-by-pub and tea-by-tea comparison between Calgary locations and similar London establishments demonstrates it’s not necessary to travel far to get a taste of English charm.

London vs. Calgary: The pubs

Perhaps because Molly Malone’s offers an eclectic range of programs that attract community-minded folk and because the Flying Horse is the last pub standing in its immediate neighbourhood, both attract a diverse crowd.

The two are evenly matched for their great food and drink menus. Malone’s carries a greater variety of ciders than most Calgary pubs, making it comparable to its London cousins on that score. And Malone’s beautiful rooftop patio can’t be matched by the Flying Horse, but the Flying Horse’s stunning stained-glass dome ceiling is not seasonal.

Within easy walking distance of London’s West End theatres, the Flying Horse has the added cachet of being a favourite watering hole of fictional London detective Cormoran Strike under its previous incarnation as the Tottenham (the pub underwent a rebranding to return it to its original name this past July). If he were in Calgary on a case, he’d probably stop in at Malone’s on a weekend for the full Irish breakfast.

The Bow River Barley Mill Pub Co. and The Blackfriar 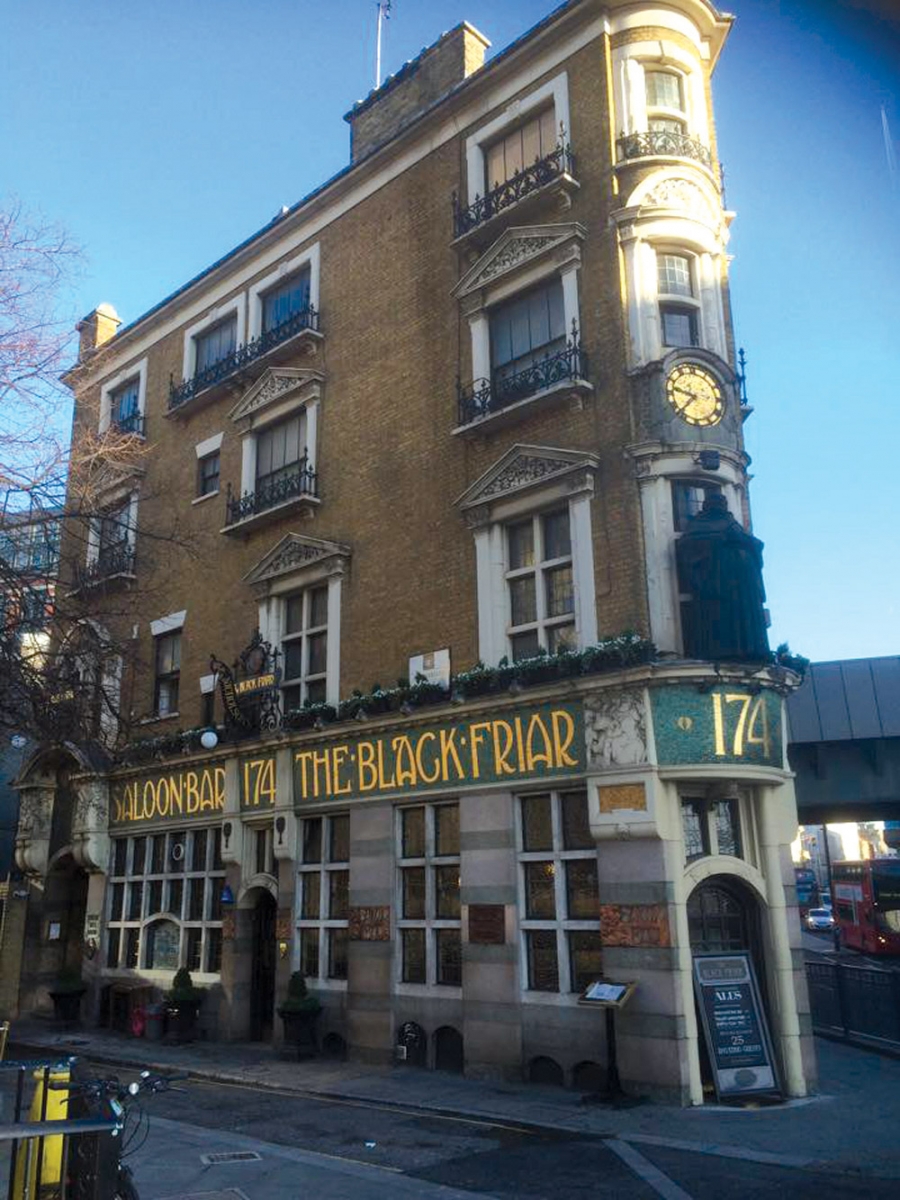 photograph courtesy of the black friar

These two pubs are linked by the era of their origins. In 1875, the building that now houses The Blackfriar was built on the site of a medieval Dominican friary. Eleven years later, in 1886, the Eau Claire and Bow River Lumber Co. was constructed on the banks of the Bow. When the Bow River Barley Mill Pub was built, old lumber from the original distillery was used to create the second floor.

Apart from the genial-looking friar above the door, the Blackfriar is easy to miss, but the interior surprises with its quirky loveliness. Easily walkable from Shakespeare’s Globe, The Tate Modern and St. Paul’s Cathedral, the Blackfriar is the place to go when the spirit is willing, but the feet are weak. 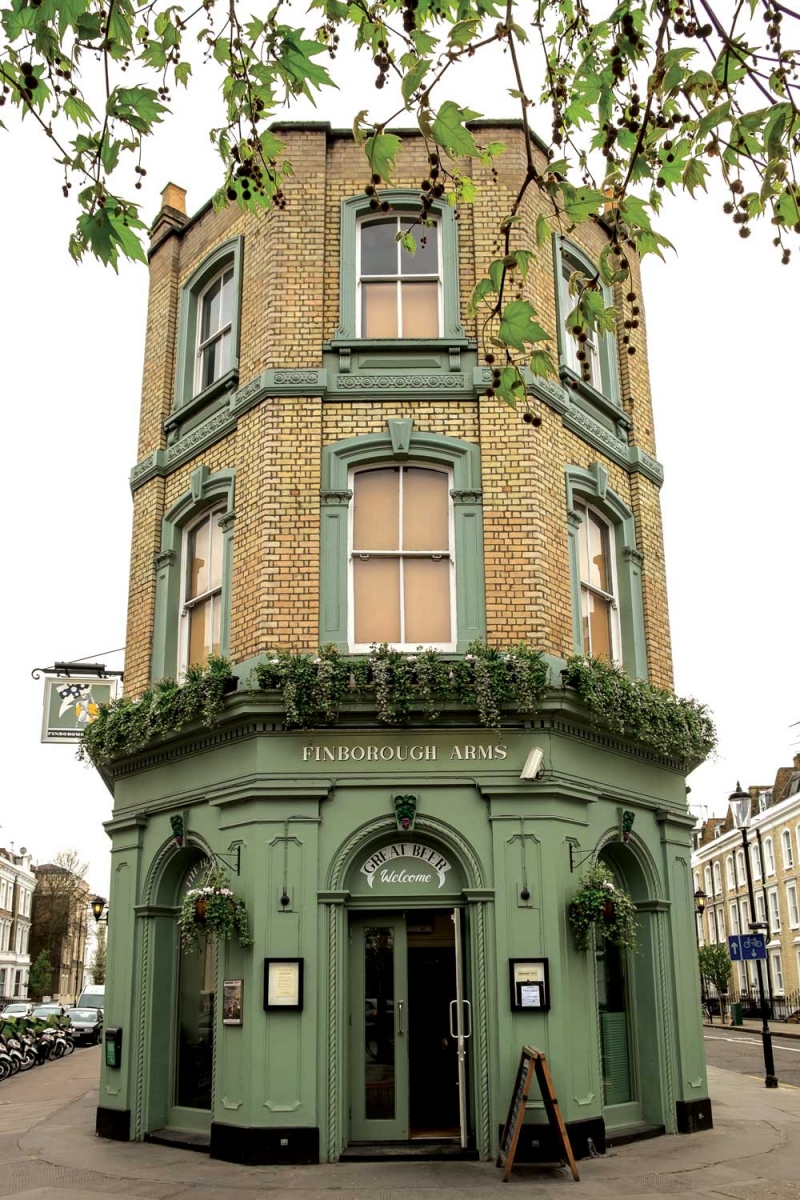 photograph courtesy of the finborough arms

If a pub is doing its job, it becomes the place where everybody knows your name. Nottingham’s, with its vat of endless popcorn, the all-day breakfast with Spolumbo’s sausage and a server who can handle the whole room by herself, is such a place. And the elegantly homey Finborough Arms became that place on my recent visit to London.

If you’re staying anywhere near Earl’s Court on a trip to London, stop in for a Thundering Molly Cider and a show in the theatre upstairs. Pub-theatre combo – wish Calgary had one of those.

The Hop In Brew Pub and The Earl of Lonsdale 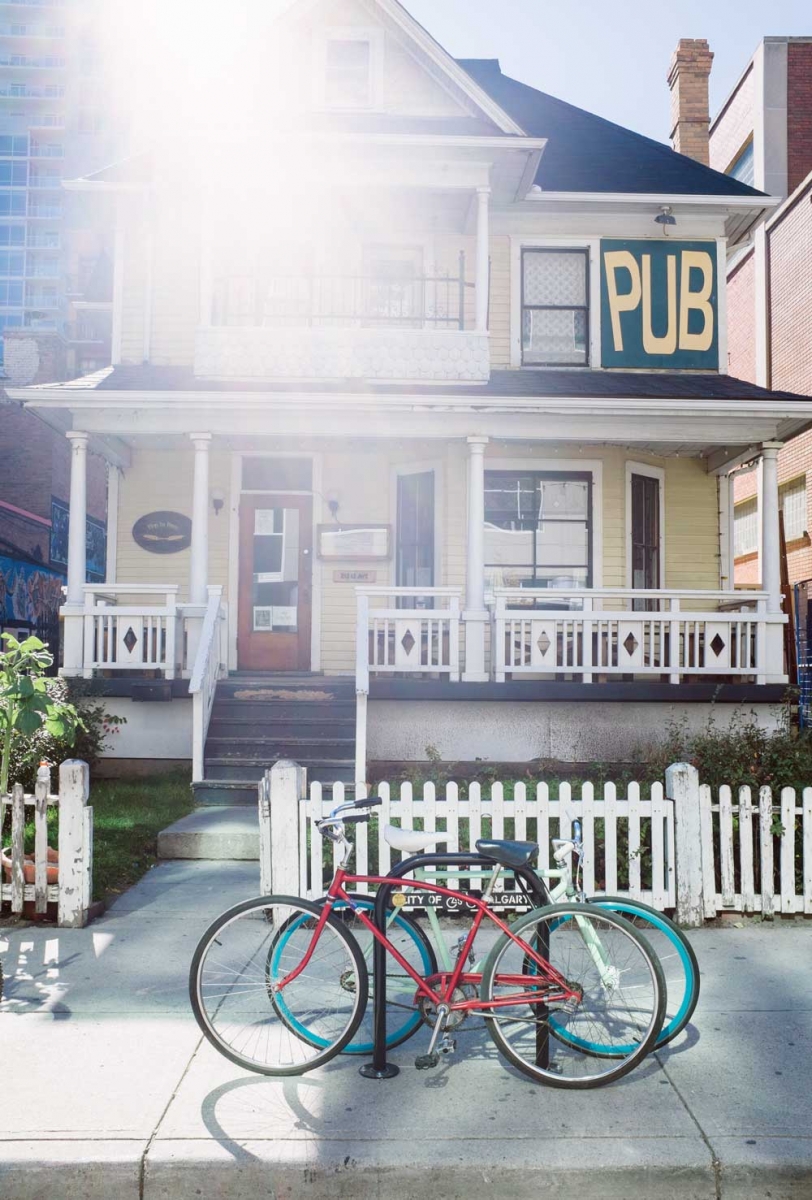 The Hop In Brew Pub.

The Hop In Brew is in an old house. Popular with beer lovers because of the wide range of brews available, it also serves excellent pizza. Retaining the shape and character of the home it once was, it has nooks and hidey holes, a crooked staircase and a deck and balcony well-suited to people-watching.

The Earl of Lonsdale on Westbourne Grove is on a teeming corner in the middle of the famous London Portobello Market in Notting Hill and, like the Hop In Brew, has the feel of an old house with secrets in the walls. It’s popular with fans of Samuel Smith Breweries and unpopular with those who want something else.

Slightly removed from the downtown core, The Hop is ideally positioned for a post-theatre drink. The Lonsdale is a sweet haven from the antiques seekers on Portobello Road on the weekend. The Hop has more variety in the brew department and that unbeatable pizza, but the Lonsdale has a fantastic outdoor beer garden.

Lougheed House and The Harmony on The River Thames

These two options are united in offering unique venues for an afternoon tea. A two-hour cruise along the Thames on The Harmony by Bateaux London features a piano player and, unlike any tea I’ve ever experienced, refills the sandwich plate as often as you wish. Be sure to save room for the meringue tart.

Meanwhile, the former home of the late Premier Peter Lougheed’s grandparents is one of Calgary’s best-preserved heritage buildings. Available for a minimum of eight patrons, you must book in advance for this exquisite tea. In season, the garnishes are fresh from the Lougheed’s beautiful gardens and the chef uses mostly local produce and products. Excellent service and scrumptious sandwiches (even the cucumber, which is usually the weakest link) make this a great choice for a special gathering. 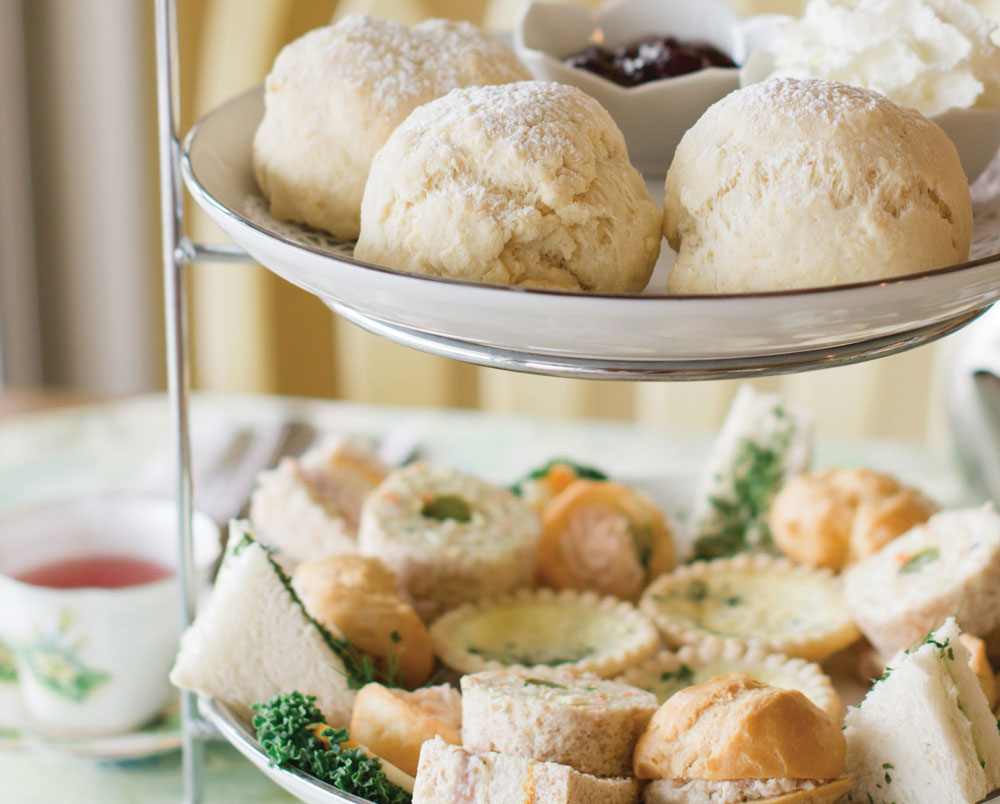 If you’d like your tea to evoke a Jane Austen charm, you could do worse than these two options. Located above the Coach & Horses Pub, a notable establishment in its own right, to get into the Soho’s Secret Tea Room you have to proclaim your appointment for tea to the bar man or woman, who calls upstairs to announce you, then opens a door that leads to rickety stairs that take you up to your tea. It’s the kind of place where Mr. Wickham would take Lydia Bennet. Located in the West End, it’s a good spot for a pre-theatre tea.

If Austen herself were a character in an Austen novel, the Dove’s Nest is where she would go for tea in Calgary, not to spy on people (for that, she would go to the Palliser), but to sit quietly in a charming corner and write while enjoying well-prepared delicacies. Plus, you get to choose your teacup, and the selection of teas is the widest I’ve seen on either side of the Atlantic.

The Fairmont Palliser Hotel and Gallery Mess at the Saatchi Gallery 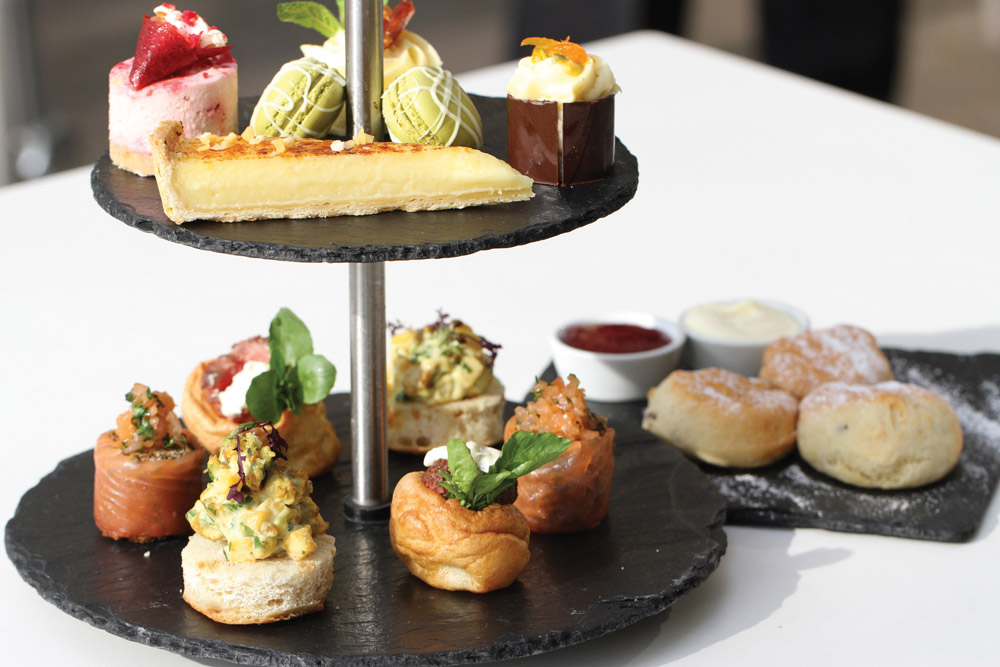 photograph courtesy of the saatchi gallery

Gallery Mess at the Saatchi Gallery.

You don’t have to book ahead at the Gallery Mess, and you won’t be sorry for sampling the ultra-fresh specialties in an atmosphere that is much more relaxed than the surrounding elegance implies. Your choices for tea include a pot of Hendricks (wild berry, orange and gin). Stop in before or after perusing the hidden gem that is the Saatchi.

While the Palliser requires a couple of hours notice (cut-off time to book is 11 a.m.), it serves a classy afternoon tea every day, featuring Grand Marnier cream and its own estate tea. Served in the Rimrock or the lobby lounge, the Palliser also offers special tea events from time to time, often paired with a special price for an overnight stay.