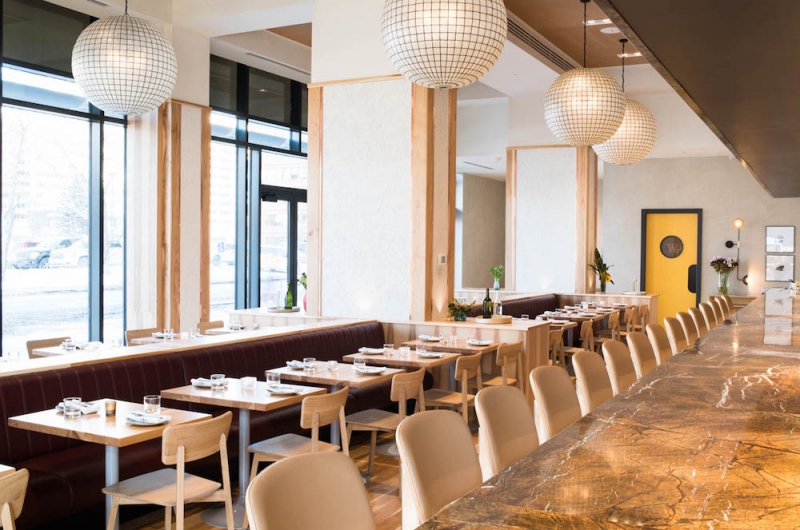 A Southern barbecue restaurant, a ’60s-style lounge and a Mediterranean eatery are some of the final new restaurants to open in 2017. Here’s what you need to know about the latest food-related openings, news and events in Calgary.

Hi Calgary, We are open and can’t wait to meat you! Join us for 1/2 price whisk(e)y + live blues jams until 7pm. Then it’s dinner time! ? Love, Belle xoxo

Around two years ago, The Mission restaurant opened in Candela’s former space in Mission. On December 1, the space underwent another big change as it officially re-opened as the new Belle Southern Kitchen + Bar. The new restaurant is still part of Anejo Group (who also run nearby restaurants Anejo, Blanco Cantina and The Living Room), but has a new look and menu concept that focuses on barbecue. Korr Design transformed The Mission’s darker, contemporary space into a bright, more casual space complete with white barn board and vintage decor elements. The menu now features dishes like sweet potato chowder, Nashville hot chicken sandwiches, fried shimp po’boys and meaty mains like smoked brisket, smoked turkey leg, St. Louis ribs and more. A good time to stop by and check out this new 80-seat restaurant? Try the daily happy hour from 5 to 7 p.m.

If you haven’t been to Calcutta Cricket Club in awhile, now’s the time to go back. The Indian restaurant recently introduced a new menu for the fall and winter season, and there are tons of new dishes to try. New bar snacks include British chips and curry, lamb ribs, eggplant pakoras and a chutney taster. There’s also a new Wagyu sirloin kati roll and a minced beef curry.

Donna Mac opens in the Beltline​

One of this year’s most eagerly anticipated restaurants has officially opened in the Beltline. Donna Mac gets its name from the grandmother of co-owner Amy Turner, and offers what the restaurant has dubbed “new neighbourhood cuisine.” Chef Justin Longpre heads up the kitchen here, which serves seasonal, shareable dishes on locally made dishware for lunch, dinner and weekend brunch. The approachable menu features dishes like pistachio-crusted carrots with molasses and lemon mascarpone, pork salad, beef cheeks with jalapeno and cheddar potatoes and pork belly with sake steamed clams. Be sure to order a one-bite s’more (only $2) for dessert. Unsurprisingly, the drink menu is impressive as well (Vine Arts Wine & Spirits and Proof co-owners Jeff Jamieson and Jesse Willis are also co-owners of Donna Mac, and Proof’s Nathan Head manages the cocktail offerings here). Try the Doctor B (it comes with an apple cider ice cube that melts into your drink) or the DMGT (think a gin and tonic with a refreshing hint of fennel). The 68-seat restaurant was designed by Sarah Ward Interiors and features a Brutalist architecture-inspired look that feels bright and airy during the day and cozy at night.

Stop in for some Mediterranean fare from Doughlicious in northeast Calgary. The eatery has a small amount of bar and table seating if you want to eat in, or you can grab some of the packaged snacks and treats to go. The menu includes meat fatayer (meat pies), a selection of fresh olives and dips, manaqish, Mediterranean pizza bites and desserts like ma’amoul cookies and baklava. Be sure to buy at least one package of the freshly baked pitas for home as well.

Empire Provisions is moving up — literally. Previously working out of a lower level commissary kitchen on 17 Ave. S.W., the local charcuterie and butchery shop has moved into Cured Delicatessen’s former storefront space. Whether you’re looking for a charcuterie board for a night of entertaining, some cured meats for dinner or some fresh sausage, this is the place to get it. There’s also a 25-seat cafe where you can grab breakfast or sandwiches featuring smoked beef brisket, breaded pork cutlet, esposito pork meatballs and smoked turkey. Click here to find out more about what you should buy at Empire Provisions.

The Guild has new seasonal dishes and drinks for winter

The Guild is keeping things fresh this winter with a handful of new, seasonal dishes that can be enjoyed during the winter months. New dishes include a prairie paella with octopus, clams, chicken and housemade bacon, a half Peking duck and dry-aged bone-in meatballs. The cocktail menu also has five new additions, which can be ordered at The Guild and directly below at the subterranean lounge Sub Rosa. New drinks include the Cranberry Yule (with vodka, dry ginger beer, Amaretto-soaked cranberries, maple syrup, lime and cherry bitters) and the Brandy by the Fire (with Pere Magloire calvados, Angostura, Peychaud bitters and maple syrup).

When you walk through the main door at Two Penny Chinese, you have the option of entering the restaurant or heading downstairs to The Tea House, a cocktail bar with a small menu of food offerings. Both are worth checking out, but if you happen to be visiting on a Sunday, you may want to go to The Tea House, which just launched its Dim Sum Sundays. The special features dim sum baskets for $5 that feature items like yolk buns, shrimp wontons, baked barbecue pork buns, wagyu beef and water chestnut dumplings, sesame chicken salad, red bean sesame balls and egg tarts. The special runs from 6 p.m. to close on Sundays.

The Wednesday Room is your new destination for after-work drinks or an evening out. Located on Stephen Avenue, the 5,600-square-foot lounge officially opened in mid-November and is a refreshing, unique addition to the area. McKinley Burkart designed the two-level space, which marries a ’60s vibe with decor elements inspired by various Stanley Kubrick movies like The Shining. The dinner menu is largely comprised of share plates like ribeye carpaccio, oysters, charred cauliflower and sopresatta crostinis, though there are also a few pasta dishes and larger share plates. Given that it’s a lounge, it’s not surprising that The Wednesday Room also has an intriguing drink list. In addition to a selection of wines and beers, the cocktails range from the All in Thyme (with Tanqueray gin, charred lemon, thyme, black walnut bitters, ginger and pear foam) to The Traveller (with Suntory whiskey, Jagermeister, Yellow Chartreuse, apple and maple).