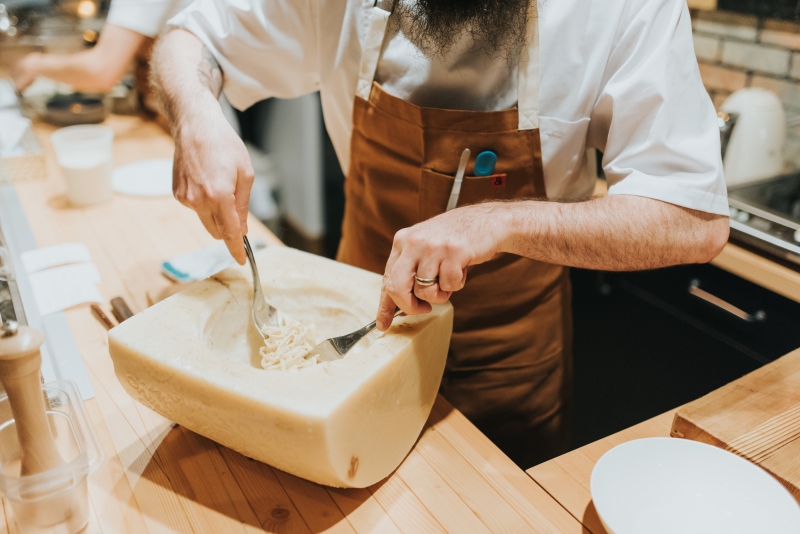 While that may not seem like much room for a new pasta bar, Bread & Circus feels surprisingly spacious and offers a small, pasta-focused menu.

There are six pastas on the menu, all featuring the restaurant’s fresh noodles that are made-in-house daily. But the cacio e pepe, a simple linguini dish that gets mixed inside a wheel of cheese, is one of the standouts. The inspiration for the dish (and the restaurant) came during a recent trip to Rome by restaurant co-owners Kelly Black and Jayme MacFayden. According to Kelly, “cacio e pepe is THE Roman pasta,” and the pair particularly loved it at Da Enzo Trattoria in Rome.

For those of us not going to Rome, we can eat cacio e pepe here in Calgary at Bread & Circus. After cooking the linguini noodles, chef Kayle Burns swirls the noodles inside a hole in a wheel of Italian pecorino romano cheese from Peasant Cheese Shop in Kensington. Black says they used a wheel of parmesan during the restaurant’s first few days, but switched to pecorino romano since it’s the cheese traditionally used for this dish in Rome. The wheel of cheese sits right on the kitchen counter area in front of the bar, so if you’re sitting there, you’ll have a great view of the process.

Once the pasta has been mixed in the cheese wheel, it’s topped with a sprinkling of pepper, which gives the dish a little bit of heat. Because there’s no actual sauce on the pasta, just a light coating of cheese from being swirled in the wheel, cacio e pepe tastes light for a pasta dish.

Bread & Circus went through its first wheel of cheese in just under three weeks. When they’re done using it as a delicious mixing bowl for pasta, the leftover cheese is used on the 4-maggi pizza (along with provolone piccante, friulano and fior di latte mozzarella) at Una Pizza + Wine, another BMeX restaurant located next door. And a new wheel is cracked open for Bread & Circus.

While you can certainly get a few pastas to share amongst a group, the $18 portion of cacio e pepe is also the perfect individual size. You won’t feel hungry, but you’ll have just enough room to finish off your dining experience with some of the restaurant’s homemade gelato.