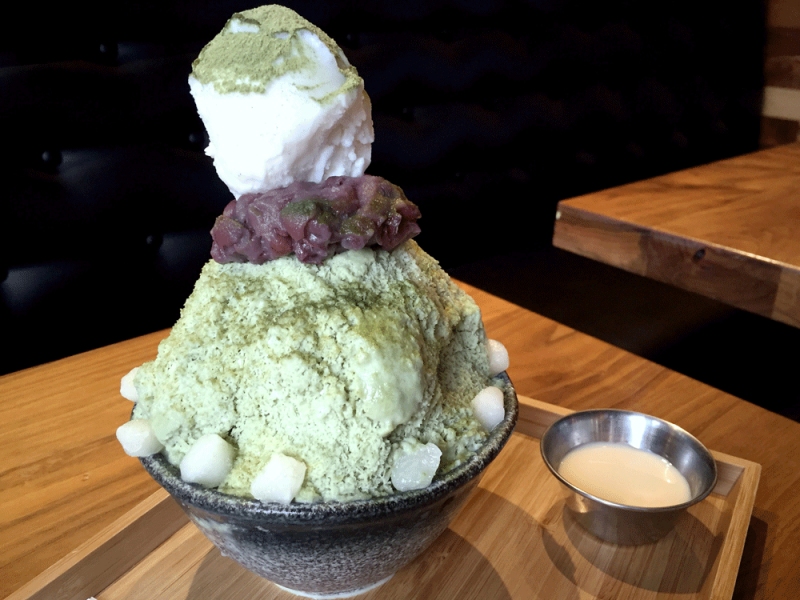 Bingsu is the latest Asian dessert to create a sensation in North America – like bubble tea and egg puff waffles before it, bingsu is coveted not only because it seems a little weird to the North American diner, but also because it’s fun and kind of wacky looking. It’s also not easy to find. The JusFruit location in Kensington (formerly Quickly) boasts the first bingsu-style dessert in Calgary.

Bingsu (also known as “patbingsu,” “bingsoo” or “Korean snow dessert”) is, in the simplest of terms, a really fancy snow cone. But it’s also much more than that. JusFruit’s JusSnow desserts are creamy rather than icy, a sharp contrast to the syrupy shaved ice that so many of us are used to. JusFruit staff scoop the ice out of a special snow machine and then flavour it and top it with the toppings of your choice.

JusFruit carries four different JusSnow flavours: mango, matcha, soydust and berry-berry. Unable to resist a classic, I opted for the matcha. The ridiculously large bowl of dense green snow is topped with a neat pile of red beans and bites of mochi and comes with a side of condensed milk. I also took the optional scoop of Fiasco Gelato.

The matcha taste is strong and slightly bitter, making this a great warm weather treat for anyone who is not a fan of super sweet desserts. Red beans can feel a bit odd to those not used to Asian desserts, but they work quite well with the matcha and give the dessert a nice bite, while the scoop of ice cream and condensed milk add some sweetness. All in all, JusSnow is a fun dessert to try out – though be sure to bring a friend or two to share with because the serving size is a lot to for one person to get through.

Also, be warned, at this time at least, JusSnow only available at the Kensington JusFruit location (there are other locations in Chinatown and Forest Lawn). A bowl of JusSnow goes for $10.50, with an additional $1 charge for the gelato.