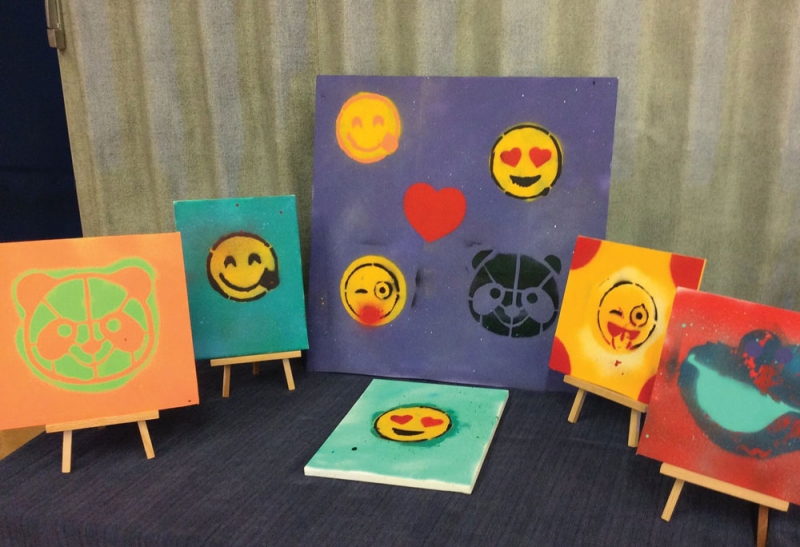 Election campaigns are transformed into art after Llewellyn donates them to local art initiatives.

When election season ends, so does the need for the hundreds of coroplast campaign signs scattered across city lawns. Normally, these signs are destined for the recycling bin, but Andrea Llewellyn, a community organizer and co-founder of Voltage Creative Garage, thought there might be a way to extend their life by donating them to local art initiatives.

“As much as I’m a huge supporter of democracy … I hate the waste,” she says. Llewellyn received approximately 150 signs from a Calgary-Elbow by-election campaign she worked on in October 2014, and, after reaching out to political candidates following the 2015 provincial election last May, she received approximately 400 signs from candidates including Green Party of Alberta leader Janet Keeping, Progressive Conservative candidates Terry Rock and Christine Cusanelli, Alberta Party leader Greg Clark and others.

The signs have been given a second life as art canvases for programs at Rumble House and GlobalFest’s urban art workshops for at-risk youth. Llewellyn is planning to reach out to candidates running in the Oct. 19 federal election for their signs, as well.

Projects like Llewellyn’s, where items are reused for new purposes rather than destroyed, are gaining momentum in Calgary. Inglewood’s ReWorks Upcycle Shop, which sells products made from recycled materials, and Reclaimed Trading Company, an architectural salvage garage in Ramsay, are two Calgary businesses that have popped up in the last few years that are also embracing the trend.

Since opening two years ago, Kelly Kask, co-owner of Reclaimed Trading Company, has had customers looking to repurpose everything from turning tin ceiling tiles into backsplashes to transforming vintage meat lockers into outdoor patio seating.

“What we enjoy is [how] you can look at a widget 15 times a day as a widget, and yet a customer will come in out of the blue and say, ‘That widget is now going to be garden accessories.’ And you have to step back and look at it and go, ‘Wow,'” Kask says. “That’s the cool part of when people come in looking for things.”

According to Kask, some are inspired by the increasing popularity of DIY projects, while others are simply looking to be environmentally conscious. Either way, one man’s trash can become someone else’s table, bed frame or piece of art.