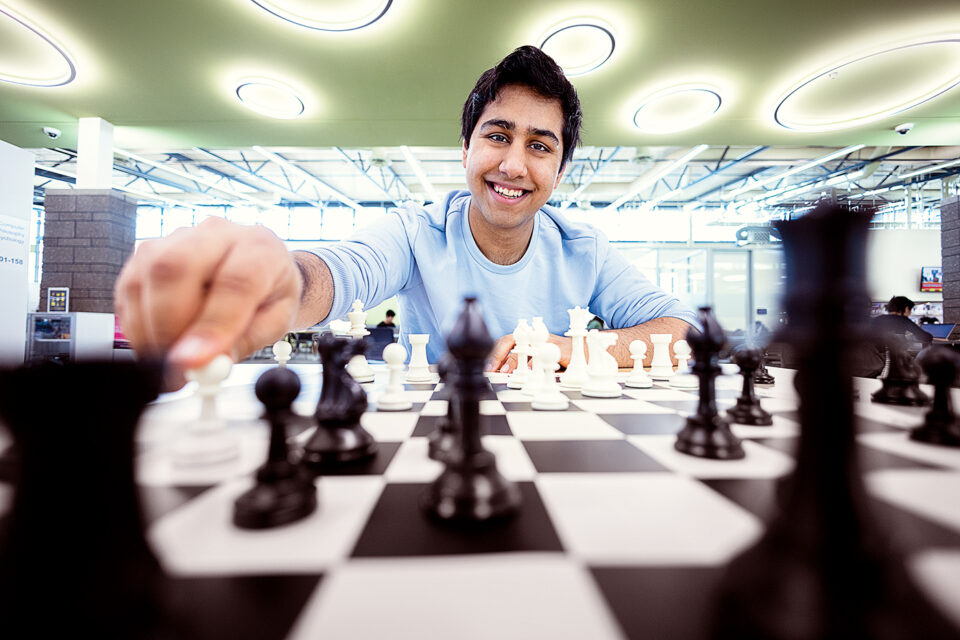 Muhammad Saim taught himself chess as a teen hanging out at the Country Hills Library, where sets were free to use. As he became more involved in the game, he felt that the skills he was learning — among them, planning and patience — could be beneficial to other kids his age. So, in 2021, at 16 years old, he founded Checkmate Foundation Canada (CFC) and now serves as its president.

CFC is a non-profit with a mission to “equalize opportunities for youth and vulnerable populations by fostering development through chess education.” In its first year alone, the organization has raised money for The Mustard Seed through a charitable chess tournament, sponsored chess clubs for Westmount Charter School and Henry Wise Wood High School, conducted its first professional instructor-led workshop, and partnered with four different community organizations to offer programming and donated chess sets.

While youth are the core demographic targeted by CFC, the organization is working with additional populations, as well. Its community partnerships include the Calgary Dream Centre, which works with individuals recovering from addiction, and the Kerby Centre, which serves a senior population.

So, what about those benefits?

“There have been a lot of studies that suggest playing chess can improve your cognitive ability, aid your emotional and psychological development, and help with pattern recognition,” Saim says. Plus, there’s the fact that it feels good to be part of a community where you share a common interest and goal.

Finally, Saim says that chess gets a bad rap — perhaps deservedly — as an elitist, male-dominated game. He hopes that through CFC’s initiatives, he can help change that.

If you’re looking for an in-person experience, check out local clubs such as the Alberta Chess Association, the Calgary Junior Chess Centre and Calgary Chess Club — the latter offers one free session for visitors before requiring membership.

Alternatively, try the game out from the comfort of your computer: Saim recommends Chess.com, the world’s largest online chess-playing platform, where there are video lessons and users are matched to opponents at their same skill level. ChessKids.com, an offshoot of Chess.com, is designed specifically for younger players.

And, of course, you can keep up with Checkmate Foundation Canada online at checkmatefoundation.ca. Its website includes helpful play guides, info on upcoming events, as well as volunteering and fundraising opportunities.