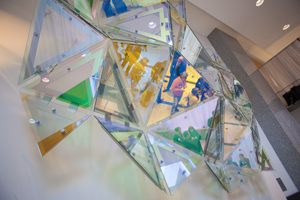 Made of dichroic glass, the structure is a massive 1,200 square feet spread over three panels, each weighing 2,700 pounds and made of 1,500 hand-made unique parts. It took Calgary artist Christian Eckart three years to complete.

“The scale of the space is monumental,” he says. “Maybe if you’re lucky you get three or four challenges in your lifetime to take charge of a space like this with artwork.”

Dichroic glass is a high-quality material made for architectural purposes. The glass is unique in that it has a particular transmitted colour and then a completely different reflected colour, which means when you look at it straight on it could be blue, while it’s reflection on the floor, for example, might be green.

The colours also will change when the light hits it, which is complemented by Centennial Towers’ massive windows in which the piece faces.

Eckart says he usually names his work based on the form and the material, hence the very literal, “Dichroic Glass Hexagonal Perturbation Triptych” but included Hat Trick as playful nod to Canada’s hockey culture.

View the sculpture in the main lobby of Centennial Towers (520 3 Ave. S.W.)