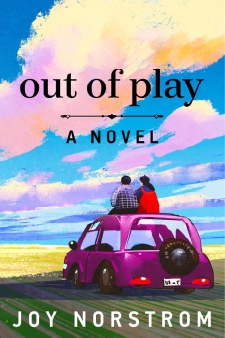 When Joy Norstrom first participated in 2013’s National Novel Writing Month, she had no idea that her project would be published three years later, almost to the day.

“It was a bit surreal,” she says. “I’d been thinking about the story, but I started writing the first scene on Halloween night that year, and it was published October 27 [2016].”

Norstrom’s debut book Out of Play began as her NaNoWriMo self-challenge to write a 50,000-word novel during the month of November. By signing up, participants from around the world – including hundreds of Calgarians, who call themselves “Wrimotaurs” – get writing tips and support from NaNoWriMo’s local and international websites. They can track their progress online, and can also meet up at in-person writing sessions, which Norstrom found particularly helpful.

“It’s like exercising in a group,” she says. “That’s really what I got out of it, the motivation I needed to sit down and just get words out. Even if you don’t go to any of the events, there’s still an online community to encourage you to keep writing.”

A social worker by day, Norstrom would write around her part-time job, while her young children were at school and after they had gone to bed. Most of the time she was able to keep to NaNoWriMo’s recommended schedule of 1667 words a day, which usually meant an hour to 90 minutes of writing.

“Sometimes it was a little more and sometimes a little less, but I did finish on the last day,” she recalls. “When I had a couple thousand words to go, I held off so I could finish at one of the group write-ins. You could get up and ring this bell when you got to your 50,000 words, and then everyone would cheer for you. It was great, since writing is usually so solitary.”

Norstrom advises people who are considering attempting NaNoWriMo to keep in mind that the goal of the 30-day project is only a first draft. “There’s an incredible amount of work in re-writing and editing that still needs to go in after that if you want to get it publishable,” she says.

But that’s the point of NaNoWriMo: to give writers the “kick in the pants” they need to get their ideas written down, no matter how rough the final product is.

“You can always revise a bad draft and make it better,” Norstrom says. “But you can’t revise a story that you haven’t written yet. Don’t edit yourself, don’t go back and read it, just write as much as you can. Even if you don’t finish, you’ll be further along than you were.”

Want to take on your own NaNoWriMo challenge? Here are five books both written by Calgarian authors and set in Calgary that will inspire you to put pen to paper – or fingers to keyboard.

5 Calgarian books that will inspire your NaNoWriMo novel

Out of Play by Joy Norstrom

Gillian Campbell is out of patience. Her husband is choosing his hobby over her. The hobby in question? Live Action Role-Play, or ‘larp.’ Larp involves dressing up as a character (be it medieval knight, banshee or centaur) and participating in imaginary battles for entire weekends.

Gillian is not impressed. She seeks professional advice and is surprised when her therapist encourages her to try larp. The advice seems super sketch to Gillian, but she decides to don a costume and give it a go. If larp doesn’t work a marital miracle, Gillian will be able to walk away knowing she tried absolutely everything before giving up.

Will going on her own role-play adventure heal Gillian’s marriage, or will the game shed light on everything that is wrong? (From the publisher)

After saving the Calgary Stampede from a potential terror attack in Glycerine, Detectives Lane and Li find themselves on the hunt yet again, this time following a pair of gruesome killers whose perfectly composed crime scenes match those of an inmate put away by Calgary Police years earlier. As more people come into the line of fire, Lane must team up with some unlikely new allies in order to crack the case.

Meanwhile, with the birth of a new nephew, the happily chaotic Lane household must deal with the taciturn detective’s estranged, fundamentalist family and their efforts to interfere in raising the child.

The eighth installment in the Detective Lane series of mysteries. (From the publisher) 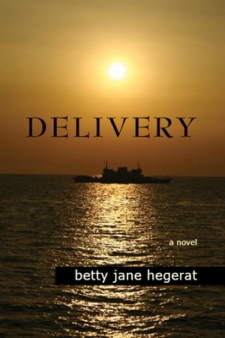 Lynn Howard has just begun to appreciate the freedom of the empty nest when Heather, her acerbic, self-centered twenty-year-old daughter, announces that she’s pregnant. Heather decides that adoption is the practical solution. After the baby is born, stunned and furious to find her heart at war with her head, she declares that she needs more time. She and her baby come home to stay with Lynn.

Three weeks later, Heather suddenly insists that Lynn deliver the baby to her adoptive parents before that resolve weakens again. Lynn can no more make that delivery than she could give away her own first child, so she stows Beegee in a laundry basket, straps her into the back of the car and drives west out of Calgary.

The novel explores the burden of too many choices, the indescribable emotional maelstrom of birth and motherhood, and the tangled threads that tie a child to a family. (From the publisher) 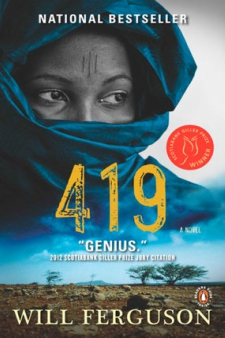 A car tumbles through darkness down a snowy ravine. A woman without a name walks out of a dust storm in sub-Saharan Africa. In the seething heat of Lagos City, a criminal cartel scours the internet, looking for victims. Lives intersect. Worlds collide. And it all begins with a single email: “Dear Sir, I am the daughter of a Nigerian diplomat, and I need your help…”

When a lonely editor in a cold northern city discovers that her father has died because of one such swindle, she sets out to track down her father’s killer. Is a dangerous game she’s playing, however, and the stakes are higher than she can ever imagine.

Winner of the 2012 Scotiabank Giller Prize, Will Ferguson takes readers deep into the labyrinth of lies that is the world’s most insidious internet scam. (From the publisher) 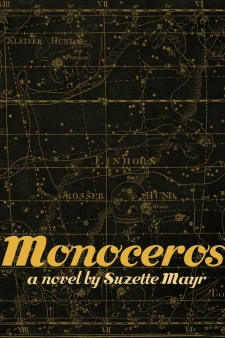 A seventeen-year-old boy, bullied and heartbroken, hangs himself. Although he felt terribly alone, his suicide changes everyone around him. His parents are devastated. His secret boyfriend’s girlfriend is relieved. His unicorn- and virginity-obsessed classmate, Faraday, is shattered. His English teacher, mid-divorce and mid-menopause, wishes she could remember the dead student’s name, that she could care more about her students than her ex’s new girlfriend.

The school guidance counsellor, Walter, feels guilty – maybe he should have made an effort when the kid asked for help. Max, the principal, is worried about how it will reflect on the very Catholic school. Walter, who’s been secretly in a relationship with Max for years, thinks that’s a little callous.

By exploring the effects of a suicide on characters outside the immediate circle, Mayr offers a dazzlingly original look at the ripple effects, both poignant and funny, of a tragedy. (From the publisher)