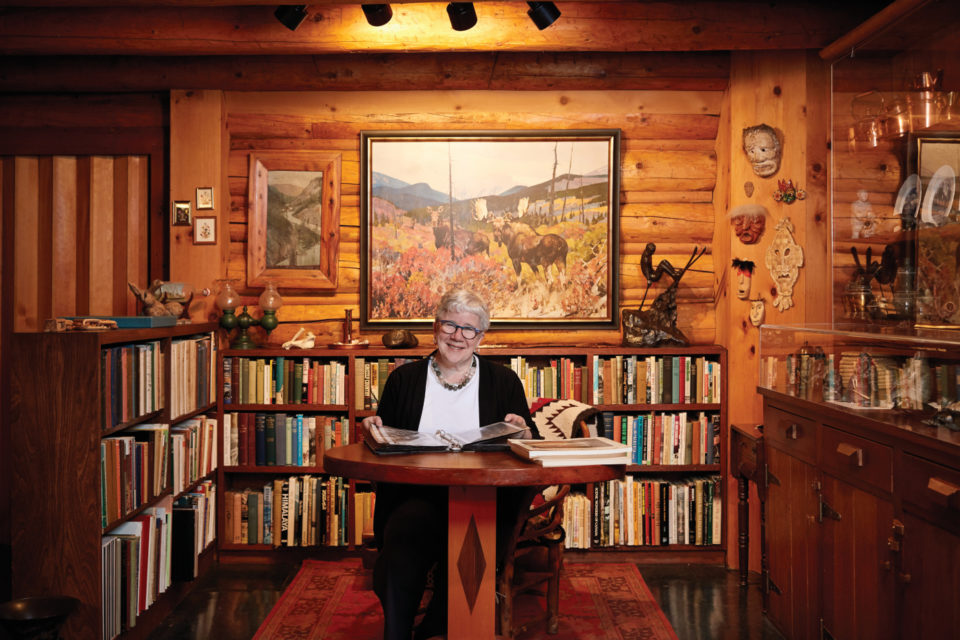 Donna Livingstone, the newly installed CEO of the Whyte Museum of the Canadian Rockies, in the former home of the museum’s namesakes, Peter and Catharine Whyte. Photograph by Erin Brooke Burns.

Last summer, Donna Livingstone left her role as president and CEO of Glenbow to become CEO of Banff’s Whyte Museum of the Canadian Rockies and the Peter and Catharine Whyte Foundation. Instead of working in Calgary’s core, she now spends her days in the heart of Banff, and you might say she has fully embraced the transition. “In Calgary we talk about the traffic on Crowchild, and here we talk about the herd of elk in the bushes outside my window,” she laughs. “Nature is always around you here.”

Livingstone says moving to Banff was a welcome opportunity to think about what matters most to her, and to pare down her belongings accordingly. Curating objects, getting organized, finding a focus — these are skills Livingstone has been cultivating for years in her professional life. The Whyte Museum is the latest in a number of cultural institutions that Livingstone has helmed; she was executive director of the H.R. MacMillan Space Centre in Vancouver in the early aughts, and from 2008 to 2013 she was the director of the University of Calgary Press. She spent more than six years leading Glenbow, not including the decade she spent there between 1988 and 1998 working in public relations and later as vice president of programs and exhibitions.

As she reflects on her time at Glenbow, Livingstone says she’s proud to have defined a focus for the multi-faceted organization: to be Calgary’s public art museum. “It got us excited, being able to bring the cultural history collection into the art story,” she says. She is particularly proud of a number of projects that succeeded in showcasing Glenbow’s collection through art, from fashion designer Paul Hardy’s Kaleidoscopic Animalia exhibition, made from pieces the designer curated from the collection, to the work of 2018 artist-in-residence Albertine Crow Shoe, a Piikani artist and jeweller who used objects from the collection as inspiration. Crow Shoe says having access to Glenbow’s collection of Blackfoot art (including pieces by her own great-grandfather, Bull Plume) was an extraordinary opportunity. When Glenbow first approached Crow Shoe about the residency, she had recently lost her husband and was considering putting art on the back burner in favour of a more conventional job. Now, her path is clear. “[The residency] was life changing for me,” Crow Shoe says. “Donna was very supportive.”

The move to Banff didn’t happen all at once. Originally, Livingstone split her time between the mountains and her Calgary home, tying up loose ends alongside her husband Edward Cavell. Commuting between Calgary and Banff was nothing new for the couple — Cavell is a former photography curator for the Whyte Museum and their now-shuttered toy store also had locations in both places at one point.

If the names Livingstone and Cavell ring a bell, it’s probably because of that toy store. The couple opened Livingstone & Cavell Extraordinary Toys in 1992, a beloved Kensington shop that closed its doors at the end of 2019. Livingstone says it was wonderful to see people who had shopped there as children return with their own children. The traditional-style shop also offered another opportunity for her to support the arts: she and Cavell chose to hire recent art school graduates, young artists at the stage of their lives where practical concerns began to put their artistic ambitions at risk. The couple provided stable employment while strongly encouraging their employees to keep building their artistic careers. “We got crazy window displays out of it, too,” Livingstone laughs.

Livingstone grew up on a small island off Vancouver Island, and she says someone once told her Banff was like an island, too. She thinks they were right. “It’s surrounded by incredible environment and it’s filled with incredible storytellers,” she says. As such, it’s a fitting locale for a lifelong story lover like Livingstone, who has a goal of reading 2,000 books in her lifetime. It’s mountain tales that inspire her when she thinks about what she wants to accomplish at the Whyte. She considers it her mission to share the region’s stories with museum visitors, from the town’s core residents to the more than four million visitors who flood Banff National Park each year.

Her favourite story — the one that made her new role irresistible — is the story of the Whyte Museum itself, which has stood on its riverside site since 1968. The museum and archive, which Livingstone considers an “engine of meaning for mountain culture,” was a passion project for artist couple Peter and Catharine Whyte; their former home/studio still stands on the property. Livingstone sees the Whytes as pillars of the community who helped to shape what Banff has become. She’s delighted to be carrying on their legacy. “The Whyte Museum starts with a love story,” she says. “How wonderful is that?”