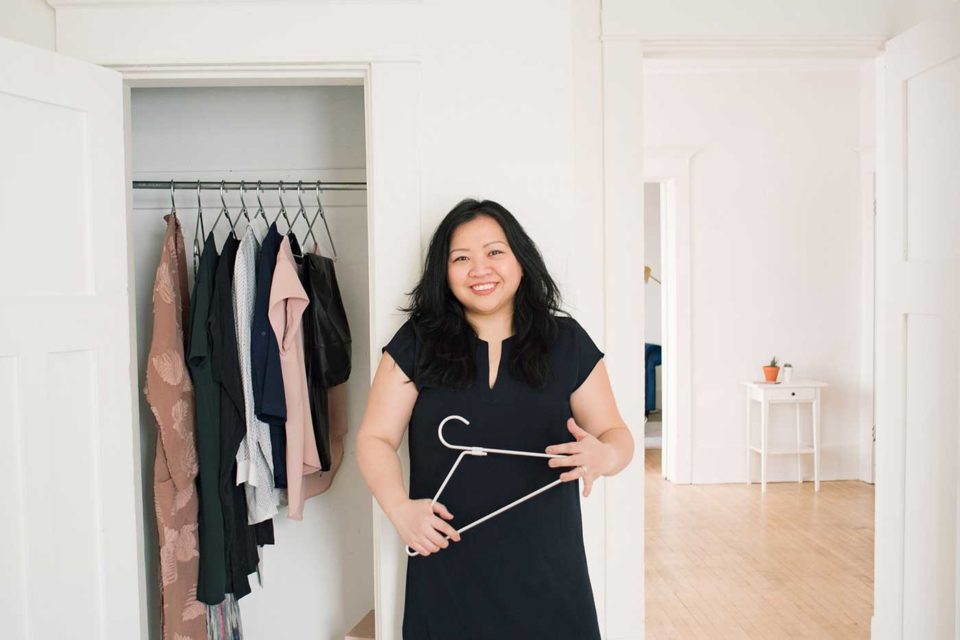 Like countless other people around the world, Helen Youn spent January 1, 2019 binge-watching Netflix’s newest series, Tidying Up with Marie Kondo. But as a professional organizer and certified KonMari consultant, the show held a particular significance for Youn.

The show follows Marie Kondo, creator of the KonMari Method and author of the international bestseller The Life Changing Magic of Tidying Up, as she helps families declutter their home (and keep items that “spark joy”) using the KonMari Method. The show inspired a surge of home tidying sprees, with many thrift stores and charities benefitting from the donated castoffs.

As a certified KonMari consultant, Youn understands better than most why the KonMari Method resonates with people so much, whether they were introduced to it through the Nexflix show, Kondo’s novel or elsewhere.

“I think it’s the fact that it’s about joy. It’s not about, ‘Oh, you can only keep two pairs of black pants’ or ‘If it doesn’t fit you have to get rid of it.’ It’s just about really asking yourself, ‘Does this bring me joy?’ and ‘Is this going to serve me well in my ideal life?’ I think people really like that about it because it’s customized to that person’s preference,” Youn says.

Youn, who is based in Calgary, has been a KonMari consultant for nearly two years now and is the only certified KonMari consultant in all of Alberta, Saskatchewan and Manitoba. As a trained KonMari seminar lecturer, Youn also teaches new KonMari consultants, making her one of only two English-speaking lecturers in North America (there are only five in the whole world).

We spoke with Youn to find out more about how she became a certified KonMari consultant, what it’s like meeting Marie Kondo, where she likes to shop for organizational supplies in Calgary and more.

How Youn was introduced to the KonMari Method

As a certified KonMari consultant, Youn helps people declutter their homes, become more organized and figure out what their ideal lifestyle looks like. But there was a time when she was in a similar situation as some of her clients.

Years ago, Youn was working a downtown office job when she went on maternity leave. As she navigated her journey as a new mom, Youn was also dealing with their Calgary condo, which was cluttered from moving from a larger space in Toronto. Hoping to get more organized, she downloaded The Life Changing Magic of Tidying Up by Kondo.

“We read it and just decided to commit to the process because her promise seemed too good to be true. She said if you do it well and do it once, you will stay organized. And I didn’t really think that was possible since I was a messy person my whole life,” Youn says.

“So we did the process, my husband and I, and a year later I was back at work and we were still organized. So I knew that the method worked.”

Youn spread the word about the book and, after coming across a posting for KonMari consultant training, she decided to sign up. “I just felt compelled to do it because of how much it changed my life,” she says.

Youn has met Marie Kondo four times over the years, including when she trained under Kondo to become a a KonMari consultant in 2016.

“[Marie Kondo] is absolutely lovely. She is so petite. I’m only 5’1″, but I tower over Marie. She is so kind and there’s just this aura about her. She really commands attention, which is not something you usually think about when you think about petite people, but there’s something about her that just really commands all the attention,” Youn says.

“Every single time I’ve met her, there’s just something about her. It’s a very special thing. I haven’t met that many people in my life that have that kind of pull.”

“A huge difference is when I introduce myself as a KonMari consultant, I would say nine out of 10 people now know what that means. Whereas before, it would be like one out of 10 would maybe have heard of the book. As popular as the book was before the show, there are still a ton people that haven’t read it or haven’t heard of it,” Youn says. “I think there’s definitely increased awareness and interest in the method.”

How real is what happens on the show?

Curious about how realistic Tidying Up with Marie Kondo is? According to Youn, much of what you see on the show is similar to what would happen during a regular tidying lesson, from the emotions to the diverse clients they work with. But other things, such as the short timelines shown on the show, aren’t typical for Youn and her clients. Check out Youn’s blog for more details on the parallels and differences.

How you can try the KonMari Method with Youn

Hoping to tackle your own home like they do on Tidying Up with Marie Kondo? Youn offers KonMari tidying lessons that are similar to what you’d see on the show. She works directly with clients in their home to declutter the space using the KonMari Method. In the past, Youn says it has taken anywhere from two to 30 lessons to complete a whole home. But she’s also been hired to just work on a specific area of a home, like a closet.

If an in-person KonMari tidying lesson isn’t for you, Youn also does virtual coaching for clients around the world, speaking engagements, workshops and events.

“I would say do it. Absolutely, just do it. I really don’t see how it wouldn’t benefit everyone … Even though I was skeptical before I tried it, I did and it totally changed my life and it just made everything so much easier for me. I really think people often stress about their homes so much, [and if] they could take that stress away, think about where all that energy could go,” Youn says.

“Everyone needs a different level of support. If you can do it after reading this book, absolutely do it. You don’t have to hire me — I see my role as a KonMari consultant to help inspire more people to want to try the process, not necessarily like I need to be hired for all of them.”

Where Youn likes to shop for organizational supplies in Calgary

“I do a lot of shopping at IKEA. I’m a big fan of IKEA, I think it’s because the price point is right. A lot of the stuff just works,” Youn says. “IKEA is sort of my first stop and if it doesn’t work, then I’ll look somewhere else.”

Youn also shops for organizational supplies at places like Bed Bath and Beyond, Walmart, Canadian Tire, Home Depot and even Michael’s.