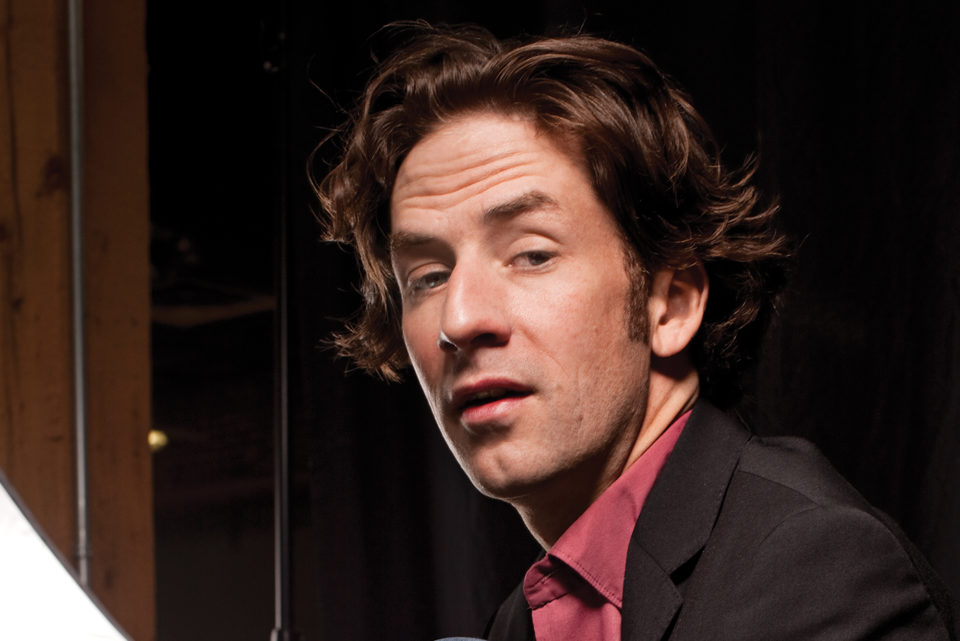 Dave Lawrence’s mom wanted him to find God, but he found improv instead.

As a kid, Lawrence went to the St. John Fine Arts School in Kensington where, in addition to getting a good Catholic education, he became interested in drawing and painting. His artistic revelation came in junior high when the Loose Moose Theatre Company came to do an improvisation demo. At 15, Lawrence was hooked. He began volunteering with the company and continues to volunteer and perform there 20 years later. “It helps me keep my skills up, and it’s just fun to improvise,” he says. In fact, Lawrence attributes much of his success to the rules of improv he learned there. “‘Don’t be prepared’ is a motto of improvisation. And the other one is, ‘Be prepared to fail,’ and those go hand in hand,” he says. “You have to take risks. All the biggest risks in my life, including making a movie, are all because of the attitudes of Loose Moose.”

If you haven’t caught his Loose Moose performances, you may have seen some of the work they inspired. His mullet- and cropped T-shirt-loving alter ego, Terry Cahill from Fubar and Fubar 2 first came to life in improv sports that led to Hot Nuts and Popcorn, a Loose Moose variety show that ran in 1999.

Before Fubar came out in 2002, Lawrence spent a lot of his time auditioning for small one-line parts in films shooting around Calgary. “At first I was like, man, I really wish I could get those little parts, because that might lead to another little part, and then another little part,” he says. “And then I just decided to make my own movie.”

When he told friends and family his plan, they didn’t think it would work. “That just motivated me more. … I wanted to prove them wrong,” he says.

So, as Terry would say, he decided to “Give’r” – a saying we have Lawrence and his collaborators, director Michael Dowse and co-star Paul Spence, to thank for.

It wasn’t easy. The first Fubar was made by maxing out Lawrence’s credit cards. When the filmmakers required interim financing to get through post-production, Lawrence’s dad took out a second mortgage. The film became a cult hit and, as a result, Fubar 2 had gathered a $4-million budget before a script was written – an unheard-of achievement in Canada.

Despite the films’ success, and the upcoming release of Lawrence’s directorial debut A Legend of Whitey, making films in Canada is a challenge. “The constant adversity in making movies often makes you think, ‘Why am I doing this?'” he says.

The answer for Lawrence is simple: “Because I’m privileged enough that I can.”

He co-wrote and starred in the two Fubar movies – the first played at the Sundance Film Festival and the second played at SXSW and the Toronto International Film Festival where it was a runner-up for the People’s Choice Award.

“Support from my friends and family. You have to realize that this isn’t a one-man show and you can’t do it on your own.”