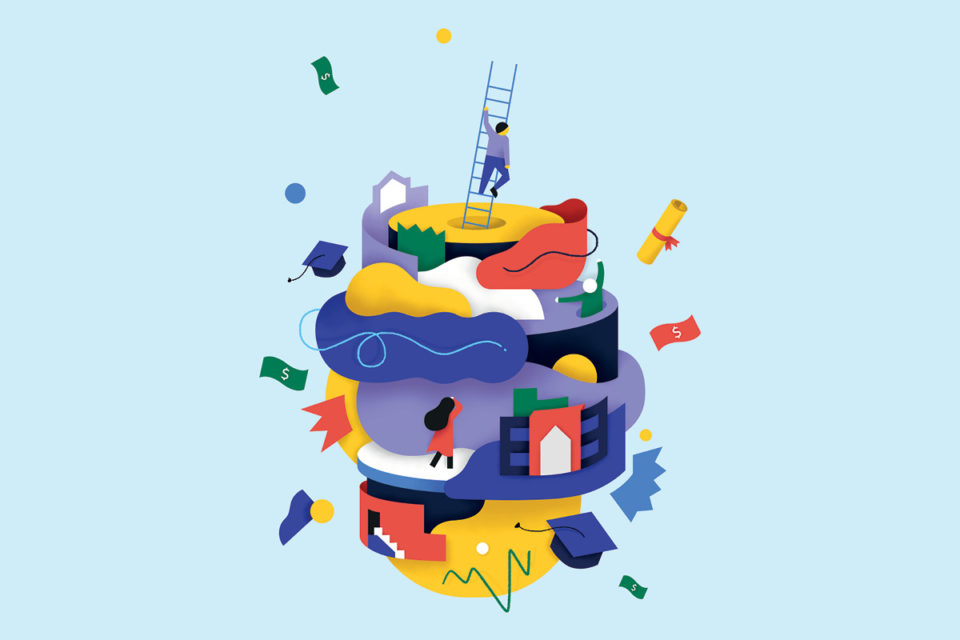 The provincial government has extended the post-secondary tuition freeze for a fourth year while it conducts a fee review. Alberta’s tuition is now lower than the national average. Undergraduate tuition at the University of Calgary, for example, is $5,385.90 per year and the first year of a thesis-based masters degree is $5,593.50 and each year thereafter $1,627.38. Despite the tuition freeze, getting a diploma or degree is still pricey — especially when you factor in books, living costs and lost wages while in school — leading many to wonder whether it’s worth it.

According to the Alberta Advanced Education Graduate Outcomes Survey Class of 2013/14, on average, Albertans with more advanced education do make a higher annual income and do tend to work in their field. The report states that the 2013/14 graduates from Alberta’s publicly funded schools had
an employment rate of 92 per cent at the time of the survey in December 2015, and 90 per cent felt their job related to their education.

The biggest bang for your education buck is a master’s degree — approximately two more years of education above the undergraduate degree netted the 2013/14 grads an average of $27,000 in additional annual income. But more education only earns you more up to a degree (see what we did there?);
the average PhD graduate earned less than those with a master’s.

In June 2017, the provincial government announced nearly $25.8 million in new funding to increase and improve mental health supports for post-secondary students across Alberta. Of that, nearly $2.5-million a year for three years will go to universities and colleges in and around Calgary. While the funding will be used for multiple initiatives at each school, here is how the funding breaks down and some of the most notable initiatives.

Did not respond to requests for information.

This funding will be focused on training and awareness on campus. For example, Applied Suicide Intervention Skills Training and Lock Zone, which teaches students how to recognize an overdose and what to do.

Banff’s funding will go toward hiring a mental health and wellness strategist to assist in developing an institutional strategy as well as an Elder in Residence to support Indigenous learners.

The U of C formalized collaboration with the Distress Centre and Wood’s Homes for after-hours support, enhanced peer support and increased the number of psychologists and social workers available.

A number of new programs and announcements have made it clear that Bow Valley College is making IT and STEM (science, technology, engineering and math) a priority. Earlier this year, Bow Valley and IBM established the first Canadian hub for the IBM Skills Academy at the college. The IBM Skills Academy is a new academic professional technical certification program that prepares students for careers in IT and builds local capability consistent with international standards. The agreement has an initial term of three years.

The courses are designed to provide the student with all of the federally required knowledge to become a Canadian UAV pilot recognized by Transport Canada and to know how to legally operate drone aircraft in Canada.

But perhaps the most notable news at Bow Valley is that Dr. Misheck Mwaba, — who became the vice president, academic, in September of last year — was appointed to the Natural Sciences and Engineering Research Council of Canada (NSERC).

NSERC is an agency of the Government of Canada that provides research grants to post-secondary students and post-doctoral fellows across the country. NSERC’s governing body is composed of 18 distinguished Canadians and advised by various standing, and advisory committees that are guided by a peer-review process. The terms of these appointments are staggered between two and three years’ duration. With Mwaba’s appointment on the council, Bow Valley will play a part in determining funding for research and innovation in natural sciences and engineering.

ACAD to Become a University

Four years ago, the Alberta College of Art + Design (ACAD) presented a sustainability and growth funding proposal to the Province. In 2017, that proposal was rejected. Following that, news leaked calling the institution’s sustainability into serious question. And then, on March 1 of this year the Province announced it would grant ACAD university status.

“It’s about time,” said Daniel Doz, president and CEO of ACAD, who pointed out that the school has been granting degrees for more than 20 years and that it was the only remaining art school in the country that was not a university. “I’m glad we’re getting the recognition of the university status. People seem to focus just on the sustainability [of the institution] but all these pieces impact each other.”

The change in status means that ACAD will be able to set up a General Faculties Council (GFC) similar to those in place at other universities in the Province. Once established, the GFC will expand the existing academic oversight at the institution, ensuring ACAD’s programs continue to meet provincial, national and international standards.

“In terms of how we teach, what we teach [and] who we are, it doesn’t change because we’ve been in fact operating as a university. That was part of our argument when we put that [proposal] forward three years ago,” said Doz.

ACAD’s sustainability issues will also be mitigated by this because it gives ACAD the recognition it needs to be funded differently from other institutions in the province.

In order for the school to officially become a university the provincial government must amend the Post-Secondary Learning Act. The proposed changes to the act will be brought before the legislature and ACAD’s new name will be revealed this fall.