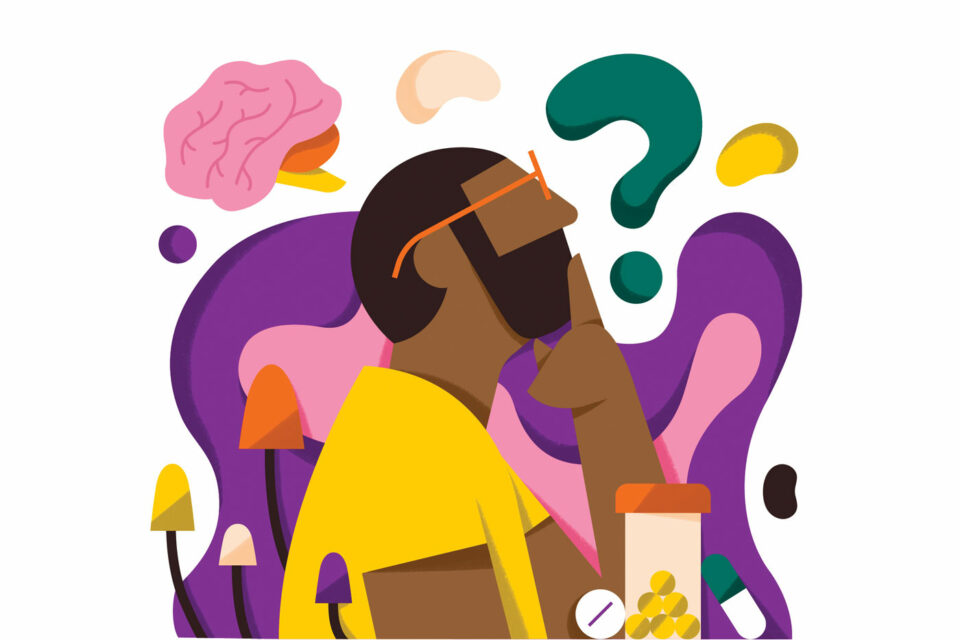 Illustration by Gust of Wind Studio.

Four decades since the launch of Prozac, a psychedelic renaissance is shaking up the idea of how we should treat depression and other mental health disorders. Those at the forefront say there is a sense of stalled progress with mental health therapy. At worst, we are in crisis — of mental health, of opioid overdoses and of addiction. But research out of Johns Hopkins University and other prestigious institutions indicates that high doses of psychedelic substances such as psilocybin, administered in a controlled setting by medical professionals, can produce long-lasting results in a relatively short amount of time when traditional treatments like antidepressants fail.

Among the local proponents is Jim Parker, founder and CEO of Calgary-based Bloom Psychedelic Therapy and Research Centre. “Rapidly rising rates of depression, suicide and deaths by drug overdose make it clear there is an urgent need for alternatives to the current biomedical approach — i.e., ‘take a pill to fix your brain chemistry’ — which is helping some, but failing far too many,” Parker says.

With a recent Angus Reid survey indicating that 54 per cent of Canadians say their mental health has worsened since the COVID-19 pandemic was declared, our current system of referrals, specialists and waitlists — a system that is often inaccessible to those who can’t spare the time, money and energy to get well — could soon reach its breaking point. “If you have a therapist with 30 or 40 people who they’re hanging onto for years, you’re not going to get in to [see] that therapist,” says Dr. Robert Tanguay, clinical assistant professor in the departments of psychiatry and surgery at the University of Calgary and vice president and chief medical officer of The Newly Institute, an inter-disciplinary mental-health clinical organization, operating across Canada, that offers psychedelic-assisted psychotherapy among its outpatient treatment programs. “Everything we have designed [at The Newly Institute] has been designed to be rapid access, rapid resolution of treatments and rapid return to work and life … We can’t just keep spending money on an administrative system that’s not working. You have to look at novel ways.”

Ketamine, a dissociative anesthetic, can induce an out-of-body experience that some patients say helps separate their mind from their trauma (a process known as “ego dissolution”) and objectively evaluate it during a therapy session. Psilocybin (street name magic mushrooms) is said to induce a sense of openness and honesty that can help some patients break down emotional defenses to address painful feelings. MDMA (street name ecstasy) can induce higher levels of empathy, which could help patients learn self-forgiveness. “Studies are starting to show the three of them are very similar,” Dr. Tanguay says. “They may hit different receptors, but they have similar responses. You see massive neuronal growth. It really enhances neuroplasticity, or the ability for the brain to change and heal.”

All three psychedelics are restricted under the federal Controlled Drugs and Substances Act, though ketamine is legally available to veterinarians and medical doctors for use as an anesthetic and for other medical purposes. Both Bloom and Newly offer ketamine-assisted therapy programs. Led by teams of nurses, psychiatrists and physicians, the programs include ketamine sessions, goal- and intention-setting therapy sessions and any other therapies tailored to a patient’s specific needs. The programs are intensive, running between four to 12 weeks, with sessions lasting between two to eight hours, three-to-five days a week.

Currently, medical professionals can apply to Health Canada’s Special Access Program to use psilocybin or MDMA as a mental health, end-of-life therapy for terminal clients, which Newly has done and Bloom plans to do in the future.

Last June, Parker donated $3 million to the University of Calgary’s Hotchkiss Brain Institute to fund the Parker Chair of Psychedelic Research to advance knowledge about the role for psychedelics in mental health. The research chair is the first of its kind in Canada and a step forward in aligning psychedelics with lab coats rather than lava lamps in the public consciousness. “We need to test scientifically the efficacy and safety of these substances and how best to use them; that needs to be done in research settings,” Parker says. “Those studies are what is going to be required to remove the stigma around psychedelics, and that’s the key to opening minds in government, in the medical community and in the population at large, to assure people can benefit from them.”

The inaugural Parker Chair researcher is Dr. Leah Mayo, a neuroscientist who has studied the intersections of mental health, stress and pharmacology. “I’m excited about the psychedelic part of it, but I don’t want to treat that differently than I would any other class of drugs,” Dr. Mayo says. “[I] want to be doing high-quality, high-impact science that’s going to inform clinical treatment.”

Dr. Mayo, who begins her work at the Hotchkiss Institute this September, grew up in Keweenaw Bay Indian Community on the L’Anse Reservation in Michigan, where she saw the need for mental-health services. She sees the Parker Chair as a unique opportunity that has the potential to dramatically increase accessibility to novel treatments. “Because this comes down to accessibility,” she says. “We need to design the treatments with the notion that if they’re successful, they [can] be scaled up to meet the needs of communities. Not everyone has someone like Jim Parker in their community who’s donating this money and building these clinics. Where I’m from, we don’t have that. So, how can we make sure the treatments we come up with are going to be accessible to people who really need them?”

The existence of clinics like Newly and Bloom suggests that government policy makers may be opening their minds to research on alternative medicines. Even so, academics and medical practitioners feel the need to proceed with caution. Research data in 1950’s Saskatchewan indicated that LSD was a cost-effective, low-risk and single-dose therapy alternative to lifelong stays in institutions or daily-dose prescription medications. But, after declining political support and moral panic changed cultural attitudes, scientists were discouraged, if not banned, from continuing their research for the remainder of the 20th century. “You don’t get a third chance for these sorts of things,” says Dr. Mayo. “So, I feel like we owe it to this class of drugs to not screw it up and to see what we can do with them.”

Moving from clinical trials to everyday patients means overcoming misinformation about the risks of addiction or diversion (using psychedelics recreationally after using them for therapy), both of which Dr. Tanguay says are unsupported by current data. “The advantage, unlike opioids, benzos and other medications that people are prescribed and take home, [is] nothing here leaves,” he says, referring to the ketamine-assisted therapy at Newly. “The pharmacy delivers it here, it goes into our safe, you come in, you get treatment, you leave. You never get your hands on medication.”

Psychedelic-assisted therapy itself isn’t innovative — psychedelics have been used for hundreds of years for their spiritual and medicinal properties — but the fact that these therapies could be made available in the next two to three years and potentially alter our mental health care system, certainly is. “I would say that psychedelic-assisted therapy has the potential to be for mental health what the electric car is for transport,” says Parker. “It’s a massive paradigm shift. It’s pretty exciting.”

SABI Mind is another psychedelic-assisted therapy clinic in Calgary embracing novel approaches to treating mental health and chronic pain, though with a special interest in treating those who work in hospitality. The clinic’s founders are entrepreneurs with ties to the hospitality industry, who had lost a close friend and mentor. The experience shed light on the mental-health struggles faced by many others in the industry, and how these struggles have compounded over the course of the pandemic, which hit this industry particularly hard. SABI Mind also has a research focus, and recently developed and launched the Canadian Psychedelic Survey, the most comprehensive survey of Canadian psychedelic use to date.

Property of the Week: A Cedar Log Home With a Sauna in Rural Foothills County