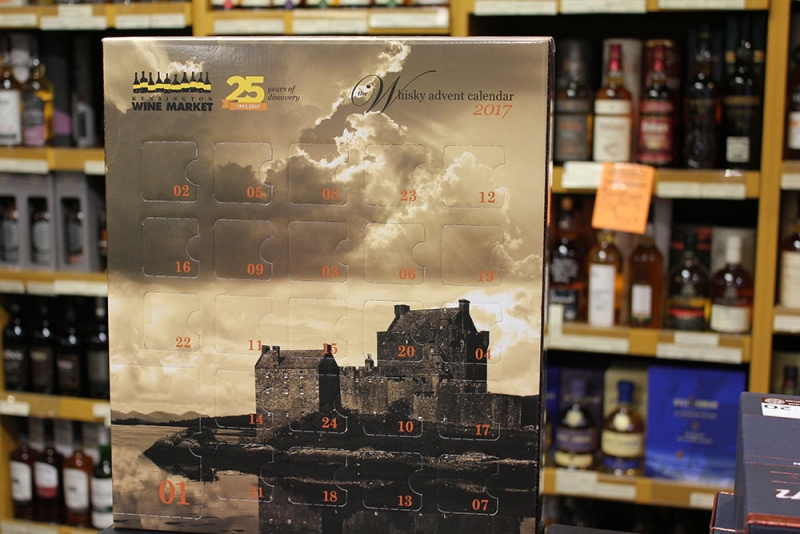 Many December days start with a treat plucked from the door of an advent calendar. For those who have outgrown their affinity for stale, waxy chocolate, but not for the excitement of counting down the days, there are a growing number of adult advent alternatives.

Each year the Kensington Wine Market puts together a whisky advent calendar featuring miniature bottles of 25 different single malt whiskys. The shop’s resident whiskey expert Andrew Ferguson decided to start producing the calendar after being disappointed with an imported version.

“There’s a tremendous breadth of style in scotch whisky,” says Ferguson. “Over the years the quest has been to put something different in from the year before.”

Ferguson recently travelled to whisky’s spiritual home in search of new mini bottles to stash behind the cardboard doors. Putting over 1,000 kilometres on his rental car, and traveling another couple of hundred kilometres by ferry, Ferguson visited 16 distilleries around Scotland from Speyside in the northeast to the southwestern islands of Islay and Arran.

“A big part of the industry is about relationships,” says Ferguson. “Part of the business is going and breaking bread, meeting for lunch, meeting for dinner or having a couple of drinks.”

Those relationships allowed Ferguson include five whiskies that were specially bottled for the calendar. Ferguson believes the same impulse that drives him to crisscross Scotland’s islands and highlands in search of new whiskies is also behind people’s willingness to spend hundreds of dollars on an advent calendar.

“It’s about discovery,” says Ferguson. “You want new experiences. You want to try something you’ve never had before. You want to be surprised.”

That element of discovery is something Ferguson encourages would-be whisky gifters to keep in mind when picking a bottle for a partner or family member, even if you know their favourite.

“I truly believe that people like getting things that maybe they wouldn’t have bought for themselves and forcing them to try something different,” says Ferguson.

The calendar has started to gain a following among whiskey lovers across Canada, this year’s edition is already two-thirds sold out. It can be ordered online or at the Kensington Wine Market and retails for $375.