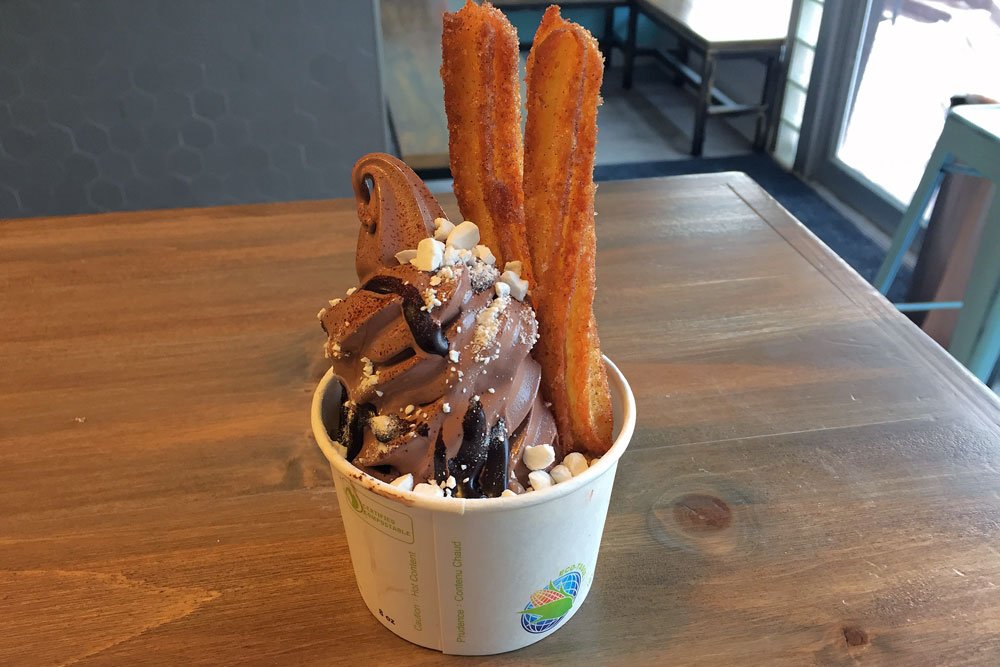 We strongly believe that churros are a treat that shouldn’t just be eaten during Stampede or while on vacation in Mexico. And no, donuts are not a fine substitute. Churros should be eaten far more regularly.

Enter the Made By Marcus Mexican Hot Chocolate Sundae. The new dessert is hot and spicy (thanks to the chipotle and the churros), just like a good Mexican getaway should be. Yet it’s cool and chocolate-y too – you are in a microcreamery in January, after all.

According to Marcus Purtzki, the Made By Marcus owner, this sundae was inspired by warm weather escapes and his desire to create a dessert with very-different-from-Christmas spices. He says this sundae will be around “for a couple of weeks or so.” So act fast.

Creating the Mexican Hot Chocolate Sundae all starts with a healthy dose of Made By Marcus chocolate soft serve ice cream, served in a paper cup.

Next, made-in-house hot fudge is pumped on top of the ice cream. The drizzle adds a certain something – let’s call it dessert aesthetic. But it also adds another level of chocolate-y complexity to the dessert.

Then, white chunks of marshmallow crumb are shaken on top of the dessert. Purtzki describes the marshmallow crumb as “like a dehydrated meringue that we then crush into a powder.” It’s crunchy and light – kind of like a cross between a macaron and astronaut ice cream.

A little chipotle powder is added after the marshmallow crumb. The fine red powder doesn’t overpower the other components of the dish at all. Rather, it is the perfect spicy compliment to the two chocolate layers. And, it provides a little zing without leaving you reaching for a glass of water.

Who’s tried our newest sundae!? We can’t get enough of these churros

We love Made By Marcus ice cream, but frankly, the generous garnish of two hot churros might be the star of this sundae. They’re warm, they’re covered in cinnamon and sugar, and they’re perfectly crispy.