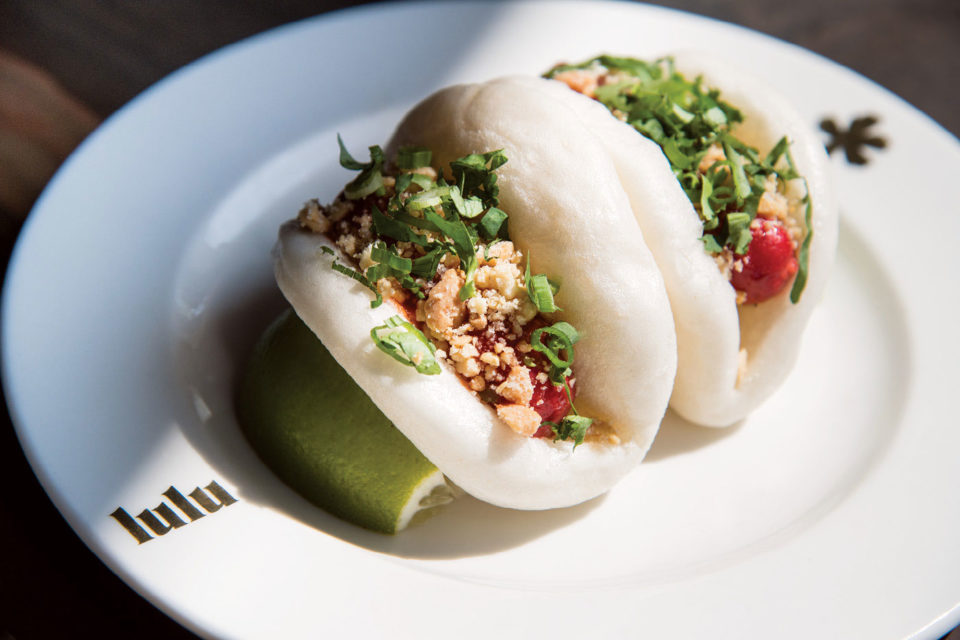 Lulu Bar on 17th Avenue S.W. is often described as the “little sister” of the very popular Bridgette Bar. Lulu and Bridgette do indeed share a lineage: they’re both part of the Concorde Group of restaurants and are helmed by a similar team, including director of operations Dewey Noordhof and Concorde’s senior culinary director JP Pedhirney. But while there is overlap in the excellent quality of the food and the vintage-cool decor (both rooms are the work of local firm Frank Architecture), Miss Lulu definitely has a personality of her own.

Whereas Bridgette’s menu leans into the Mediterranean, Lulu Bar’s chef de cuisine Joseph Sokoloff opted for a Pacific set of influences: rather than branding the restaurant as, say, “Hawaiian,” he kept the parameters loose so that he could employ flavours from Asia, Oceania and the west coasts of B.C. and California as he sees fit. Similar to Bridgette, the menu features a mélange of bar snacks and other small dishes as well as larger mains and sides, which can be used to construct individual meals or shared amongst the table.

While the menu will change with the seasons, early favourites have already emerged — particularly the tiny house-made cocktail wieners (they’re actually made with char siu pork) stuffed into bao and topped with pickled mustard greens and banana ketchup, and the nearly translucent steamed lobster dumplings swimming in a glistening puddle of basil and chili soy.

And since no restaurant can reference Hawaii without putting Spam on the menu, Sokoloff serves slabs of it on skewers with toasted nori and ginger dill pickles (don’t worry, it’s house made — no rectangular cans of meat will be found on the premises). Oh, and there are also desserts, including an outrageous hybrid of a baked Alaska and Kauai pie called the “baked hula.”

Putting the “bar” in Lulu Bar, one of Calgary’s favourite drink masters, Stephen Phipps, who previously dreamt up drinks for Concorde properties like the Bourbon Room and Ricardo’s Hideaway before developing the very solid cocktail program at Two Penny and the Tea House, is responsible for Lulu’s playful island-inspired cocktails. Serious three-ounce tiki drinks like the bobcat (bourbon, peach liqueur, lemon, coconut, Curaçao and smoky ginger ale served in a cat-shaped glass) and a flaming mai tai are best enjoyed on the patio or just inside Lulu’s open garage-style doors. You’ll (almost) be able to imagine an island breeze coming through.

This article appears in the September 2019 issue of Avenue Calgary.