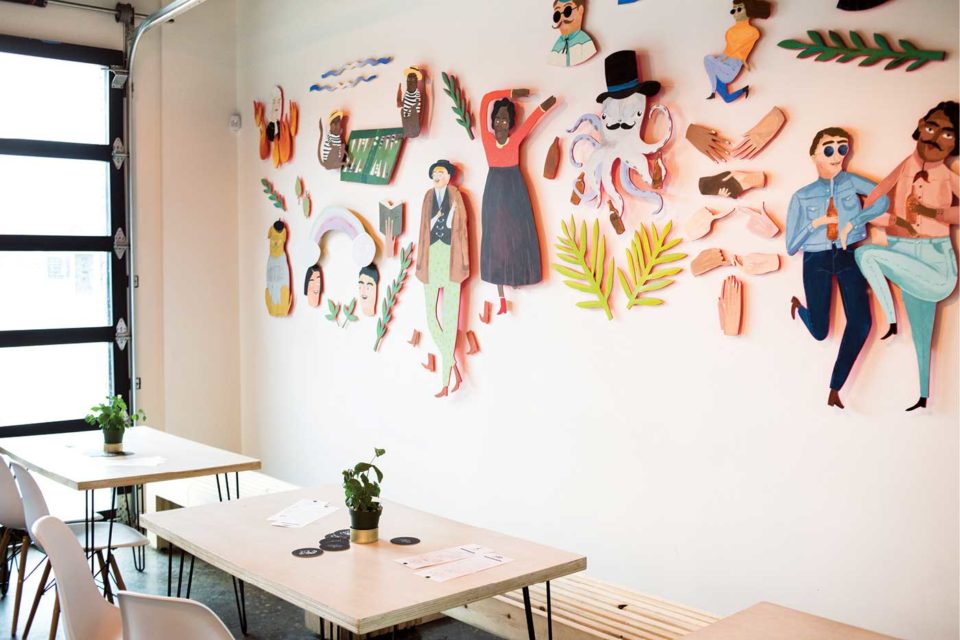 The vibe: Located in a former bike store and garage, Dandy’s taproom has an open kitchen and plentiful natural light that leaves it feeling bright and airy. There are cute characters by artist Kelsey Fraser on one wall and a showcase of local silkscreened posters on another. You can expect everyone from a family enjoying dinner to 20-somethings trying the latest sour.

Most popular and must-try beers: Dandy’s core taps include a lager, sour and stout with the word “Dandy” in each of their names. The Dandy in the Underworld: Oyster Stout, which is lighter in flavour and texture than your average stout, is probably number one from that list. That said, Dandy’s seasonal beers are highly coveted. If the Prince of the Rodeo grapefruit gose or Junglebird sour are available on site, make sure to try them as they won’t remain in stock for long.

Food: Dandy’s chef, Merritt Gordon, walks the line of adventurous eating and comfort food with style — you can typically find popcorn in the same menu section as chicken liver toast or Nordic-inspired fish. While the menu has been simplified for the social-distance era, the pickled eggs remain a must-try and the new rabbit-and-gravy biscuits entree exemplifies Gordon’s style.

Things you should know: The Dandy patio has been expanded to encompass the entire parking lot outside the brewery. It is currently open Wednesday through Sunday and spots can be reserved.

The Dandy Brewing Company first opened in a stretch of industrial northeast Calgary back in 2014. There were just 20 seats and guests could order in food from third parties or purchase one of a few pre-prepared snacks from the beer fridge. Today, Dandy is an integral part of the brewery scene in the Inglewood-Ramsay area and boasts perhaps the most inventive menu of any brewery in town. Whether you want some comfort food like potato buns with squeaky cheese or something more out-of-the-box like cold spaghetti with tomatoes and cured meat, a visit here should always include a bite.

As for beverages, Dandy excels at twists on traditional European styles like stout and witbier as well as decidedly modern sours like the cocktail-inspired Junglebird and, currently on offer, a pineapple-milkshake sour made with lactose. The beer-shy will be happy to know there are also cocktails (try the Brewery Flats G&T with house-made tonic), a small wine list and non-alcoholic options.