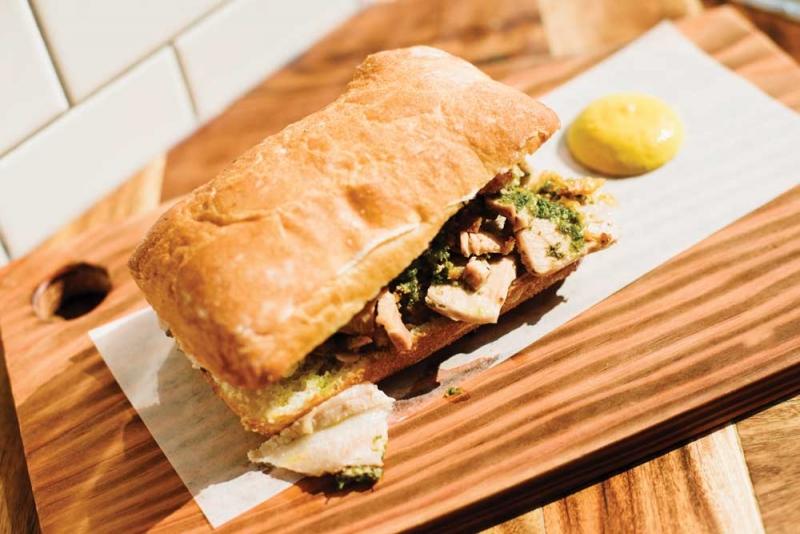 A restaurant concept needn’t be complicated to be successful. Since 2010, Meat and Bread has been serving sandwiches consisting of little more than, yes, meat on bread to Vancouverites to massive acclaim. Granted, both the meat and the bread are of superior quality, but with this growing chain, simplicity (and a little bit of hipster styling) seems to be key.

Over the years, Meat and Bread expanded to open a second Vancouver shop, one in Seattle and, as of this past summer, a Calgary outpost in the historic Grain Exchange building. The Calgary space, consisting of a long prep counter and a few tables (as well as a bar and a row of seats along the front window) is design-savvy, both in its aesthetic appeal and in its efficiency. Don’t be daunted if there’s a line (it frequently goes out the door), as it’ll move fast and you’ll have a sandwich in hand before you have time to take in all the rustic butchery-chic details scattered around the room.

As for the sandwiches, the theme of simplicity continues: there’s the signature porchetta with crackling and salsa verde, Alberta beef with pickled mushrooms and onions, Buffalo chicken with carrot-and-celery slaw and a daily special, as well as a rotating roster of soups and salads. That’s it. But the bread is soft and chewy, the meat the real deal (splayed out on a cutting board, the roasted porchetta is literally the first thing you see when you walk in). And that is all you really need.

5 Things We’re Excited to Eat and Drink This April

The Future of Restaurants in Post-Pandemic Calgary

5 Easter Treats to Try in Calgary