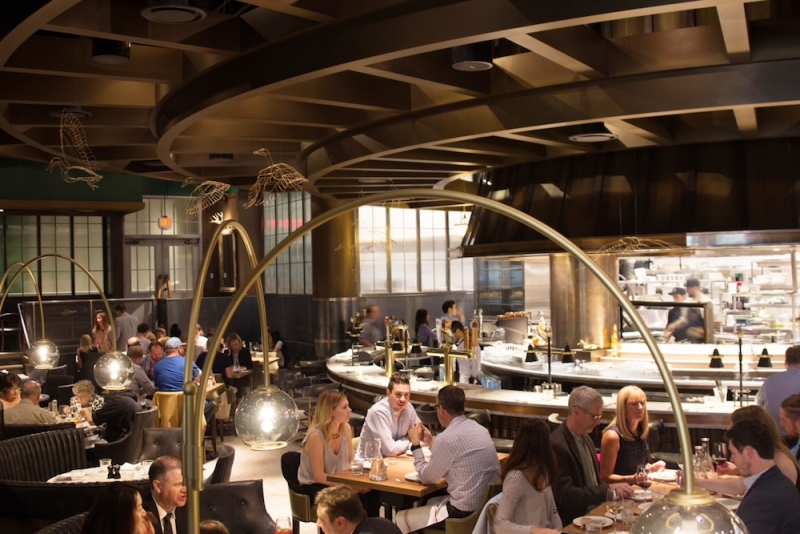 It’s been a long time coming, but one of the latest additions to Stephen Avenue was well worth the wait. The Guild opened in the Hudson’s Bay building last month, three years after Toronto-based restaurant group Oliver & Bonacini officially announced that it would be opening its first restaurant in Western Canada.

This is the 14th restaurant for Oliver & Bonacini, whose other eateries include Canoe, Bannock, Luma and Biff’s Bistro in Toronto. Open for lunch and dinner, The Guild initially opened its doors in early July with a Stampede pop-up menu before launching its regular menu on July 21. The two-level restaurant also has a large patio that overlooks Stephen Avenue.

In the kitchen, executive chef Ryan O’Flynn and his team are serving up a menu centered around live-fire cooking and locally sourced meats. Beretta Farms steak frites barnaise, Braised Jacob’s ladder bison, slow roasted pig’s head and a melt in your mouth maple glazed brisket are just a few of the meaty dishes available. If you’re not in the mood for red meat, the gin and tonic salmon, beefsteak tomato, calamari and four different salads are other great options on the menu.

The bar, which faces the kitchen, is a great spot to order a drink and bar bites like the deep fried mac and cheese, fire-roasted kielbasa and more. The drink menu features several signature and classic cocktails, beer, and wine by the glass and bottle. The Guild’s happy hour runs from 2 p.m. to 5 p.m. and from 9 p.m. to close.

The Guild isn’t quite finished growing yet, either. The restaurant will be opening a separate bar area soon, and come October, a cocktail-focused speakeasy-style space will call the basement home.

[Correction: A previous version of this story stated that The Guild is Oliver & Bonacini’s 11th restaurant. In fact, it is their 14th.]