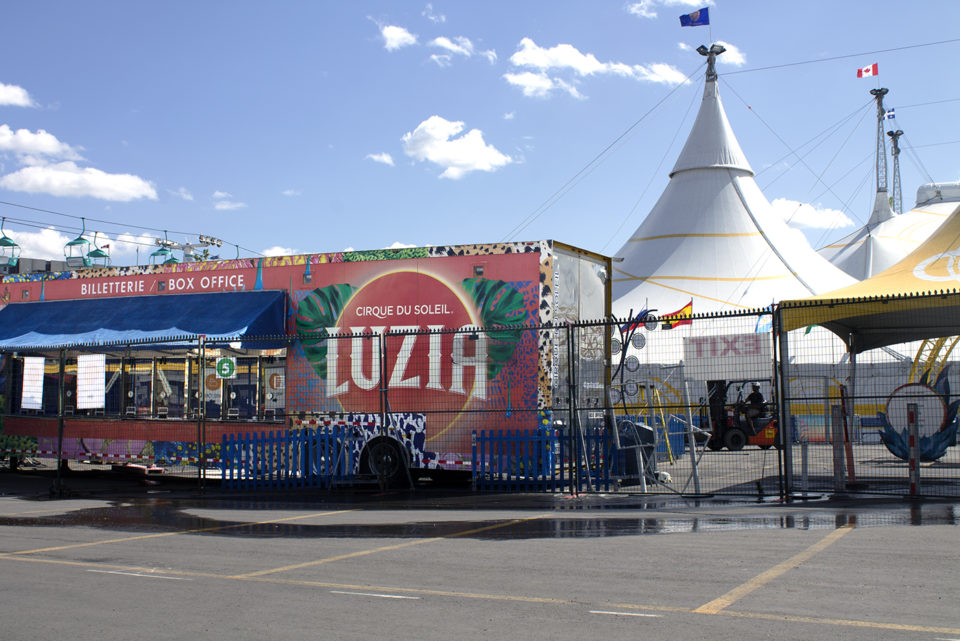 Head to Stampede Park before September 22 to see Luzia here in Calgary. Photograph by Amber McLinden.

Cirque du Soleil is back in Calgary with its touring show Luzia. The show, subtitled “A waking dream of Mexico,” is under the big top at Stampede Park until September 22. Cirque du Soleil is a world-renowned circus known for innovating and breathtaking shows. Luzia, first debuted in 2016, is a prime example of this.

Here are a few things about the show that might surprise you.

Luzia is a combination of the Spanish words “luz,” meaning light and “lluvia,” meaning rain. The rain portion of the show is where the water system comes in. The show features a rain curtain falling from the sky that various acts perform under. The stage also includes a pool in the center. In total, the entire system contains 12,000 litres of water.

With the added challenge of performing incredibly difficult physical feats, the cast of Luzia must also figure out how to adapt their acts for water. The cyr wheel (the big, single hoop that an acrobat spins around the stage in) is usually made from aluminum but was adapted for water with the addition of tire-like grips. The trapeze bars are made from wood instead of metal and all the shoes have grips on the bottom to keep performers from slipping on the stage floor.

The show steers away from stereotypical tropes of Mexican culture

Luzia exists between a dream world and reality and aims to let the audience experience an authentic Mexico. Director Daniele Finzi Pasca drew on contemporary and traditional aspects of the culture, so you won’t find any stereotypical depictions of the country’s culture in this show. Instead, you’ll watch freestyle soccer acts that you never thought possible, a contortionist as an Alebrije, a mythical creature of Mexico and much more.

Luzia has approximately 1,000 pieces of costume that you can see on stage every night. Designers create all the costumes, including the patterns and fabrics, in-house in Montreal. A touring show like Luzia can be on the road for 10 to 15 years, and if the fabrics are bought externally, they might not be produced in a few years. The designer behind the incredible colours and representations of Mexico through costume is Giovanna Buzzi.

Luzia touts some of the best performers in the world

Luzia is the first show for many performers, including contortionist Aleksei Goloborodko and trapeze artist Enya White. White first started in circus at nine years old. Cirque du Soleil hired her to perform in Luzia before she graduated from the National School of Circus in Montreal. Since then, she’s been on the road with the show. The cast are talented in other ways besides incredibly intricate and difficult tricks — they all learn to do their own makeup for the show.

For more information on Luzia and to buy tickets, visit cirquedusoleil.com.