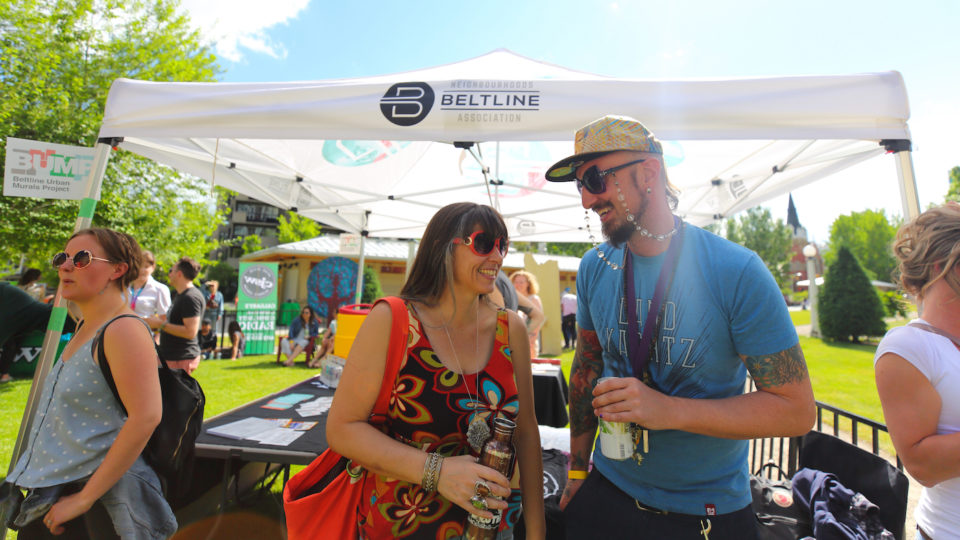 15 new murals will be unveiled in the Beltline during BUMP Festival 2019. Photograph courtesy of Beltine Neighbourhoods Association.

The Beltline Urban Murals Project (BUMP) is an initiative of Beltline Neighbourhoods Association (headed by Avenue Top 40 Under 40 2018 inductee Peter Oliver) and presenting sponsor TD Canada Trust. Now in its third year, BUMP has commissioned a series of 15 new murals and is celebrating with its second annual BUMP Festival. From August 28 to 31, Calgarians are able to celebrate with an onslaught of events that are (for the most part) free and open to all ages. Here’s a rundown on what to do during the fest.

The historic McHugh House is home to the Beltline Neighbours Association, making it the perfect place to launch the BUMP Festival. Mural artists Luke Ramsey, Lacey Jane and Layla Folkmann, Kevin Cardinal and Kyle Simmers will participate in a moderated panel at 6 p.m., then local electronic pop act Selci will perform in celebration of new EP Effervescence. Selci is an artist making waves in the local music scene, having performed at the last two editions of Sled Island Music and Arts Festival and recently sharing the Storyhive-supported music video for “Truth in the Sea.” She’ll perform with a backing band and dancer for this show. There will also be DJ sets by locals Jack Ryan and Mother Mary. This event takes place outdoors on the lawn of the McHugh House and is both free and open to all ages. In the event of inclement weather, the event will move inside McHugh House.

Curious about mural-making techniques? You can try spray painting with BUMP 2019 artists at this free, all-ages event. The workshop begins at 7 p.m. outside of Contemporary Calgary and an artist talk follows at 8 p.m. DJs will play throughout the evening. This is also a great chance to explore Contemporary Calgary in its “Temporary Contemporary” incarnation. While you’re there, peruse the Brutal Visions and A Future City From the Past exhibitions and keep an eye out for artists taking part in the Collider residency.

Movie in the Park: Beautiful Losers

If you don’t know Shepard Fairey by name, you’d at least recognize his artwork for Barack Obama’s iconic “Hope” poster from the 2008 presidential election. You can get to know him — and a schwack of other counter-cultural artists — much better during this screening of documentary Beautiful Losers at Central Memorial Park. Inner City Brewing (named one of the best breweries in Calgary by Avenue in April 2019) will be on hand with a pop-up beer garden starting at 2 p.m., and a selection of local DJs will perform from 4 p.m. until the reels get rolling. The film will begin just after sunset with an expected start time of approximately 9 p.m. This event is free and open to all ages.

If you can only do one thing during BUMP Festival, make it this. Hosts Peter Oliver and Peter Schryvers (founders of BUMP) will lead attendees on a tour of the new murals around the Beltline. Tours meet at 2:30 p.m. at McHugh House and 4:30 p.m. at Thomson Family Park. Both are free but are limited in size — advance registration online is encouraged.

The climax of the BUMP Festival is a one-two punch of parties at Inner City Brewing and The Hifi Club. First, there’s the Alley Party held behind Inner City Brewing from 2 p.m. to 10 p.m. The event is free and attendees of all ages are welcome to attend. There will be a mural workshop with artists where attendees can participate in a “paint-by-numbers” activity, food trucks and a stellar lineup of dance music’s finest: Sango (Seattle), Jubilee (New York), Lou Phelps (Montreal) and a host of local luminaries.

You don’t need to let the party end there. The Hifi Club (a five-minute walk away) is hosting a ticketed ($15) 18+ after-party with encore performances by select artists from the Alley Party lineup.