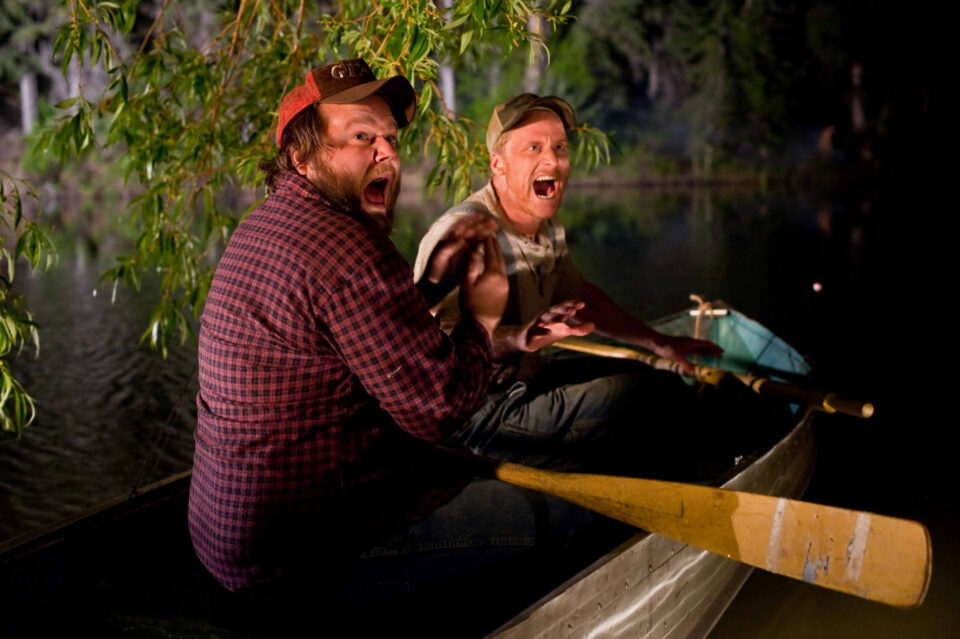 Tucker and Dale vs Evil. Photograph courtesy of Magnetic Releasing.

To help you get into the Halloween spirit, we worked with the team behind the Calgary Underground Film Festival to create a list of Calgary-connected horror flicks that may leave you sleeping with a light on and double-checking you locked the front door this October.

Locations in Irricana, Beiseker, Cochrane and Calgary provide the backdrop for this Netflix-produced zombie series set in the Z Nation universe. Taking place at the onset of a burgeoning apocalypse, Calgary landmarks like the Stampede grounds, McMahon Stadium and Queen Elizabeth High School populate the series, the first season of which follows a mother’s search for her daughter among the undead.

Filmmaker Rob Grant took terror to sea with his tense tale of three friends stranded aboard a family yacht, which split production between exteriors in Belize and interiors at Calgary’s JR Studio. Packed with sailor superstitions, cringe-inducing survival tactics and a spiraling descent into madness, horror unfolds to the tune of swinging doo-woop.

Legendary writer-director Clive Barker (the mind behind Hellraiser) chose Calgary and the surrounding area to film his fantasy horror story about monsters forced to defend their underground commune from invading humans. Watch for shots of the late-‘80s skyline, a Flames game on TV and a Calgary Stampeders pennant at the police station in between scenes featuring crescent moon-faced and goat-horned residents of “Midian.”

Suburban Calgary streets play host to filmmaker (and Avenue Top 40 Under 40 alum) Cameron Macgowan’s 2019 film where letters appear in mailboxes instructing neighbours and friends to kill or be killed. The ensuing paranoia leads to bloodied polo shirts and a few sequences that will change the way you look at a meat tenderizer.

Equal parts Paranormal Activity and Rosemary’s Baby, Still/Born plays out amongst the quiet backdrop of Lake Bonavista. Dealing with themes related to postpartum depression, director Brandon Christensen unravels this psychological horror around a mysterious figure seemingly attending to the open crib in the nursery.

Tucker and Dale vs Evil

Largely filmed on a ranch near Cochrane, this satirical take on “hillbilly horror” earned comparisons to Shaun of the Dead after premiering at the Sundance Film Festival in 2010. Taking place in nondescript woods that may seem eerily familiar to local campers, the movie’s Calgary connection adds to the fun — a riotous combo of comedic confusion and splatter horror.

This article appears in the October 2020 issue of Avenue Calgary.