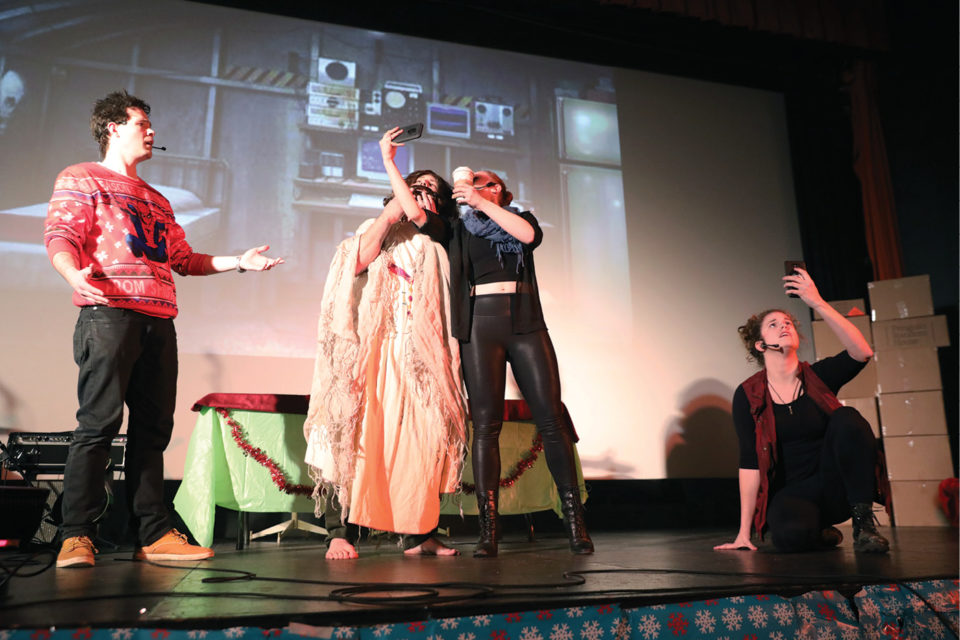 Late Night at the Plaza. Photograph by Jill Wise

While a Jimmy Kimmel Live! binge marathon might only inspire you to reach for a snack, for one group of Calgarians, it inspired the creation of a talk show of their own.

Since 2014, Late Night at the Plaza has presented a live talk show at the historic Plaza Theatre in Kensington, showcasing the city’s arts scene through live performances, comedy shorts, skits and film. The often-absurd show has survived thanks to a dedicated team consisting of showrunner Karlee McTavish, host Logan Cameron, co-host Kyle Lovstrom, sports host Mike Johnson and actor and writer Jade Benoit, as well as a long list of supporters and contributors.

Here are four things you should know about Late Night at the Plaza ahead of its annual Christmas special:

It’s not going to be perfect, and that’s what you’ll love about it

If it starts to look like Late Night at the Plaza is teetering on the edge of completely falling apart, that’s because it probably is. Five years in, the evolution of the show maintains the excitement of organized chaos. “A Late Night staple is that we mess up on stage. People expect it now,” says Cameron. “If a show went perfect, no one would enjoy it,” adds Johnson. “They like watching us fail.”

You may discover your new favourite band, comedian or magician

Late Night at the Plaza showcases the city’s arts scene, with regular performances from bands and dancers of all stripes. “Calgary as a whole has a lot of talent in the arts that goes unnoticed forefront,” says Lovstrom. The stage isn’t restricted to mainstream arts — past performances include magicians, slam poets, drag performers and a theremin player.

It’s not your typical Christmas show

Past themes for the Late Night at the Plaza Christmas show include the Quentin Tarantino Christmas Special and a Puppet Christmas Show, so this year’s satirical “Communism Christmas” is right in their wheelhouse.

It may be the weirdest Wednesday night of your life

Late Night at the Plaza is exactly what you need to spice up your watercooler banter. “My goal is for [the audience] to essentially go to work the next day and be like, ‘I saw the weirdest thing last night,’” says McTavish. “Maybe they’re not laughing at that moment, but when they get home, they’re like, ‘What did I just watch?’”

Late Night at the Plaza’s Communism Christmas is on Dec. 18 at the Plaza Theatre. Tickets are available at latenightyyc.com and at the door.