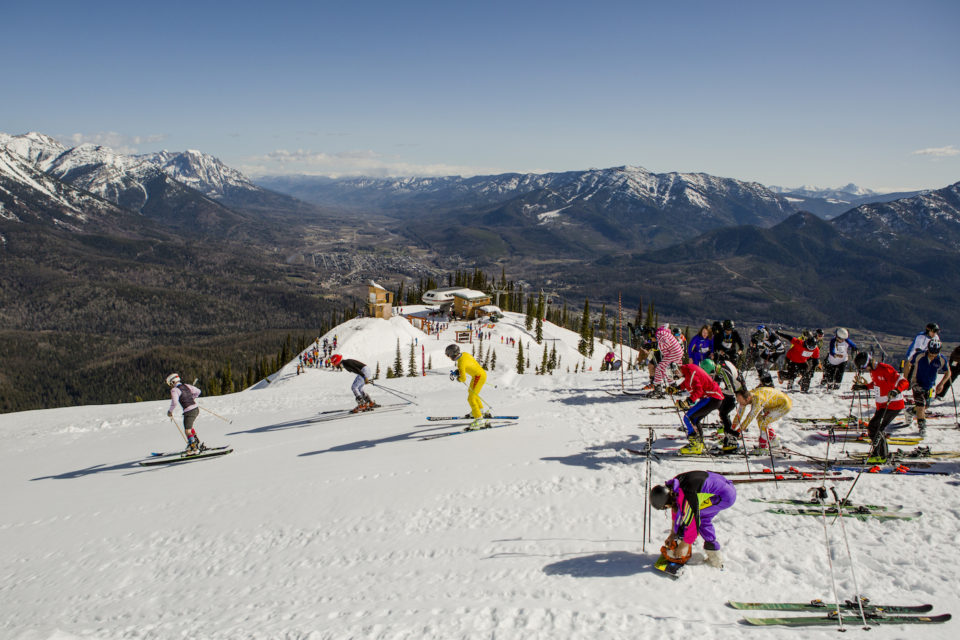 The Raging Elk Powder Pedal Paddle relay race is a Fernie tradition that goes back to the ’80s. The race will be held this year on Saturday, April 13 and is part of Fernie Alpine Resort's closing weekend Fernival festivites. Photo by Tourism Fernie/Matt Kuhn

There’s something very special about going skiing or snowboarding in the weeks following the daylight savings time switch — the weather is warm, the snow is soft, and the long sunny days make for the best après-ski sessions. The “Big 3” resorts (Norquay, Sunshine and Lake Louise) of Banff National Park, all have notably long spring-skiing seasons. With Norquay open into April and Louise and Sunshine keeping the lifts running into May, there’s still a lot of ski days to be had.

Released in 1984, Hot Dog… The Movie lives on for its iconic 80s ski style. On Wednesday, April 3, join Fernie locals by hitting the slopes in retro ski wear. Then head to the Griz Bar or the Rusty Edge for ultimate old-school après-ski action.

Cochon555 is an invitational culinary competition where five chefs each get a locally raised heritage-breed pig and create five delicious and innovative pork dishes from it, which event-goers then get to sample. Five teams doing five dishes each means there are upwards of 25 different dishes to try — plus artisan cheeses, desserts, wine, craft spirits and craft beer. Last year’s Cochon555 event at the Fairmont Banff Springs marked the first time the competition was held in Canada. It’s back there this year on Saturday, April 6, featuring an ultra-local lineup of Banff- and Lake Louise-based chefs trying to impress a 14-member judging panel for the chance to represent at the Cochon555 finale this September in Chicago. Banff Cochon has expanded programming over the entire weekend this year, adding two celebrity-chef-collaboration long-table dinners on the evening of Friday, April 5 and brunch events on Sunday, April 7. For tickets and information visit banfflakelouise.com/cochon555.

Experience WineSpring in the Kootenays

WineSpring is an annual food and wine festival weekend that takes place at the St. Eugene Golf Resort & Casino near Cranbrook, B.C. This year, WineSpring runs Friday, April 5 to Sunday, April 7 and includes a wide range of seminars, tastings, dinners and cooking classes, with the marquee wine-tasting event on Saturday evening. The unique setting of St. Eugene, a First Nations-owned resort developed out of a former residential school, also presents an opportunity to engage and learn more about Indigenous history in the Kootenays. Weekend packages, including a two-night stay, start at $389 per person. To inquire about event tickets call 1-866-292-2020.

Get a Taste of Bragg Creek’s Culinary Scene

The charming hamlet of Bragg Creek is showcasing its restaurants and culinary retailers at Taste of Bragg Creek on Friday, April 12 from 5 to 9 p.m. The event at the Bragg Creek Community Centre will feature a range of vendors offering food samples that attendees can buy with tasting tickets ($1.50 each). Attendees can then visit the actual storefront locations of the participating vendors for discounts, special menus and other deals.

Race the Raging Elk in Fernie

The Raging Elk Powder Pedal Paddle relay race in Fernie goes back to 1984. It’s kind of like a triathlon for outdoorsy-mountain types that starts with a 4.5-km downhill ski (or snowboard), followed by a six-km biking component, a six-km paddle on the Elk River that ends at the bottom of the ski hill’s access road, and finishes with an uphill run to the finish at the resort’s parking lot #1. The race can be done in teams of two-to-five with categories for men, women, mixed teams and family/youth teams. This year’s event will run on Saturday, April 13 with check-in on the evening of Friday, April 12. Early bird registration ($40 per team member) is currently open ($50 per team member if you register April 9 to 12). The race coincides with the annual Fernival season-ender festival.

Send out the Season with a Splash at Kicking Horse

Kicking Horse Resort in Golden, B.C., is wrapping up its snow season April 13 and 14  with Sunsplash Funkfest. The weekend-long party will include a slush cup contest, where skiers and snowboarders try to skim across a 75-foot pond of slushy water, and a “Dummy Downhill,“ where participants send ridiculous things over a jump.

Ride The Gully at Lake Louise

Banked-slalom races have been a part of snowboard culture since its earliest days. Lake Louise debuted the Gully Banked Slalom last season and is bringing it back this year on April 13 and 14. The snowboarder-only race is open to riders of all ages, with categories from “grom” (under eight years old) to “masters” (40-plus men and 40-plus women). Race registration is $25; participants receive a 20-per cent discount lift tickets. Register online at skilouise.com.

Panorama Resort has extended its ski season through Easter Sunday and is offering 50-per cent off lodging (minimum two-night stay) from April 15 to 21 as well as 25-per cent discounted lift tickets for those who book lodging through the resort. For more information call 1-800-663-2929.

Drink all the Scotch at Canmore Uncorked

The Canmore Uncorked Food & Drink Festival kicks off on April 25 this year and runs until May 5. The festival has a wide range of events, from wine tastings to progressive dinners (for sporty foodies, the progressive bike tours guided by Olympic athletes are a must-do). Start things off right by sampling a variety of Scotches at the Whisky & Spirits tasting night on Friday, April 26.