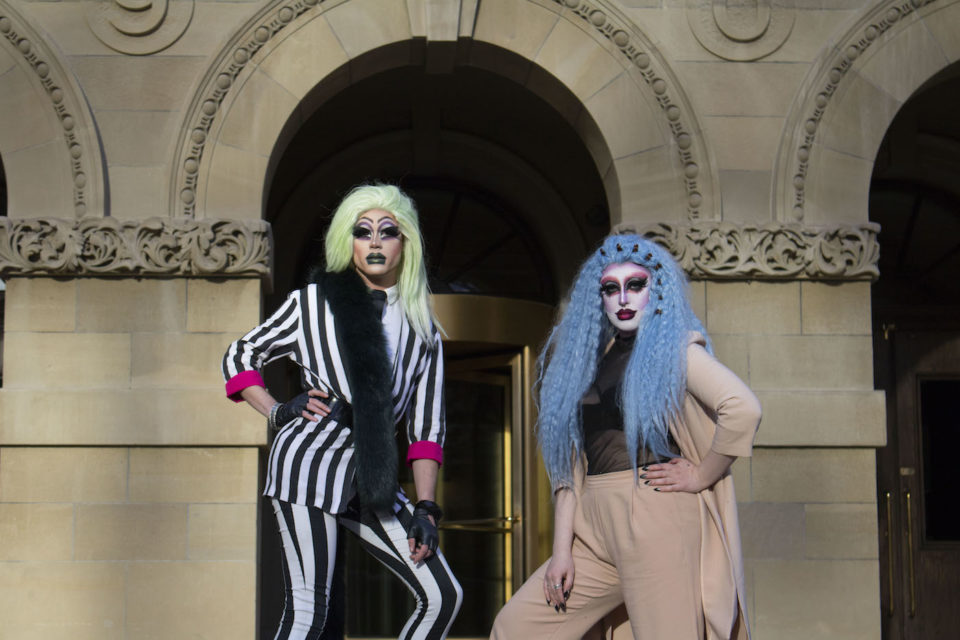 The ancient art of drag is bigger than ever, both internationally and here at home. Viewers can’t get enough of RuPaul’s Drag Race and newer shows like The Boulet Brothers’ Dragula and Canada’s a Drag. It’s important to remember that there would be no high-caliber entertainment on these shows if it weren’t for audiences in local club scenes around the globe. Performers need to be nurtured and supported locally if we want to have top-tier talent on our TV screens. So if you’re a lover of drag, put your money where your mouth is and go see some of our homegrown monarchs. Shows range from free to cheap to premium pricing, with the constant throughout being that it is customary (and appreciated) to tip.

Craft beer fans and drag-hags come together once every fortnight for this zany, variety drag show in Inglewood. Hosted by the gorgeous Queen Valerie Hunt, you can expect this one to feel explosive given the high-energy performers and the intimate size of the space. Since there’s no cover, there’s really no excuse not to bring a donation for the Skipping Stone Foundation, a charity supporting trans, non-binary and gender diverse youth.

You already know we stan for these legends. These ladies — Carly York-Jones, Tara Extravaganza and Mercedes — have been delighting audiences for nearly 20 years with a cabaret-style show filled with comedy and audience interaction. This raucous revue can often sell out in advance so be sure to book ahead.

Where: Lolita’s Lounge, 1413 9 Ave. S.E.
When: Most Saturdays September through July
Cost: $47.79 plus tax and service change. Advance tickets are available here

If you’ve been to a drag show, you’ve definitely seen suave drag king DeVery Bess either on stage or in the crowd cheering on the talent. His most recent project is the monthly DeVery Bess Drag Brunch where the audience is welcome to chow down on some eggs benny during the performances. Attendees of all ages are welcome at this show.

The Fake Moustache Drag King troupe includes a roving band of varied gender performers, often of the hyper-campy or experimental variety. You can expect to see at least one themed show — they’ve done Oscars, one-hit-wonders and Halloween in the past — per month at Dickens, plus additional satellite programming like MC workshops and an annual amateur competition. Cast members vary, but you can get a feel for the entertainment by stalking Duke Carson (Canada’s A Drag), Mo B. Dick and Butch Squeeze on Instagram.

You can enjoy your favourite drag reality show and support the community simultaneously at this event. The viewing party and after-show for Mama Ru’s hit show gives you the chance to keep up on the drama and showmances while taking in local talent. Hosts Grease Jones and Vanta Blaque have different guests every week and are currently doing Drag Race trivia contests as part of their act.

Where: Dickens, 1000 9 Ave. S.W.
When: Whenever Drag Race or Drag Race: All Stars air, right now that’s Thursdays at 7 p.m. G.L.O.C. also do other shows at various dates and venues
Cost: Free admission for The Extra Lap

You don’t talk about drag in Calgary without mentioning the Imperial Sovereign Court of the Chinook Arch. Imperial Courts are LGBTQ+ non-profit societies that exist throughout Canada, the United States and Mexico that crown various royal titles annually. Calgary’s chapter was founded in 1976 and has been raising funds for various charities and putting on public performances ever since. Events are frequent but do not fall on a strict recurrence schedule — start with the upcoming annual coronation celebrations from April 24 to 27.

Where: The Texas Lounge, 308b 17 Ave. S.W.; The Backlot, 209 10 Ave. S.W.; more
When: No fixed recurrence schedule, but events are extremely frequent. Full listings are available here.
Cost: Prices vary

The February 2019 issue of Avenue has a great overview on this collaboration between Calgary Pride, Calgary Queer Arts Society and Calgary Public Library (CPL). On select Saturdays, Children are invited to a CPL location to hear stories read by drag performers, ask questions and even play dress-up with provided costumery.

Where: Various Calgary Public Library locations
When: At least one Saturday per month
Cost: Free admission

Twisted Element, which opened in 2004, describes itself as Calgary’s premier gay and lesbian nightclub and it has ample drag programming to match its stature in the city. Shows are held every Friday, Saturday and Sunday, whenever RuPaul’s Drag Race airs and you can expect to see headline performances by Drag Race queens frequently throughout the year.

Hungry for more drag? Keep an eye on Hot Mess, Hydration, Shock Therapy and Werk for intermittent events throughout the year.