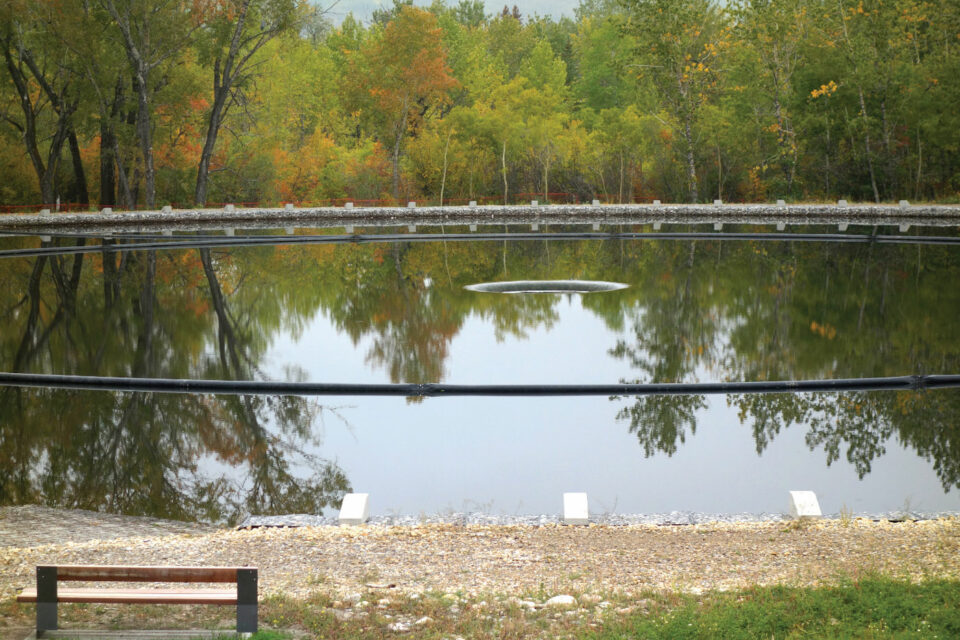 A new addition to Calgary’s system of parks and pathways, Dale Hodges Park is a natural environment park, effective stormwater treatment system and surprisingly beautiful spot along the Bow River. In addition to all that, the park is also a work of public art, a designation that is less obvious, yet is at the core of its success.

Charles Blanc and Tristan Surtees, a.k.a. Sans façon and part of Avenue‘s Top 40 Under 40 Class of 2014, were the lead artists on this project, which recently received the Canadian Society of Landscape Architects’ 2021 Jury’s Award of Excellence, the highest honour within the organization’s National Awards program. The park evolved from an initial focus to reclaim the Klippert gravel pit and concern about the flow and volume of stormwater from several communities perched above the escarpment.

As Sans façon, Blanc and Surtees forge collaborative, creative processes to bring out the best from all parties involved: in this case, three City of Calgary departments, three design/engineering firms and a construction contractor. Commitment to such a process takes time and requires trust, which Blanc and Surtees had built with the City of Calgary Department of Utilities and Environmental Protection as lead artists for the extraordinary Watershed+ public art program.

Sans façon is part of a lineage of artists who work with the land and social systems. Two predecessors include Alan Sonfist, who in the 1960s planted a New York City block with pre-settlement flora for his Time Landscape; and Agnes Denes, who cultivated two acres of golden grain amidst Manhattan office towers for the 1982 Wheatfield – A Confrontation.

Dale Hodges Park puts Calgary in league with other communities throughout the world addressing the fallout of urban degradation and lost spaces. The artists’ underlying hope for this project was to work in concert with nature to create a space where people can tune into the dynamic qualities of the environment, consider our impact and connect emotionally to this place. Surtees calls it “a slow space.”

More than four kilometres of pathways and 300 metres of boardwalks and bridges thread through the park where designed forms such as the serene Nautilus Pond and cells of natural wetlands combine with wilder swathes of bush, meadow and marsh. The details and elegance of the infrastructure slowly reveal themselves, and signs of the health of the ecosystem continue to appear on repeated visits.

The park is named in honour of Calgary’s longest-serving council member, Dale Hodges. Speaking at its dedication in June 2019, Mayor Nenshi called the park “a place of gathering, a place of wonder, a place of awe.” During the ceremony there was mention of a moose-sighting earlier in the day and birdsong could be heard nearby, two signs that the park was on the right path.