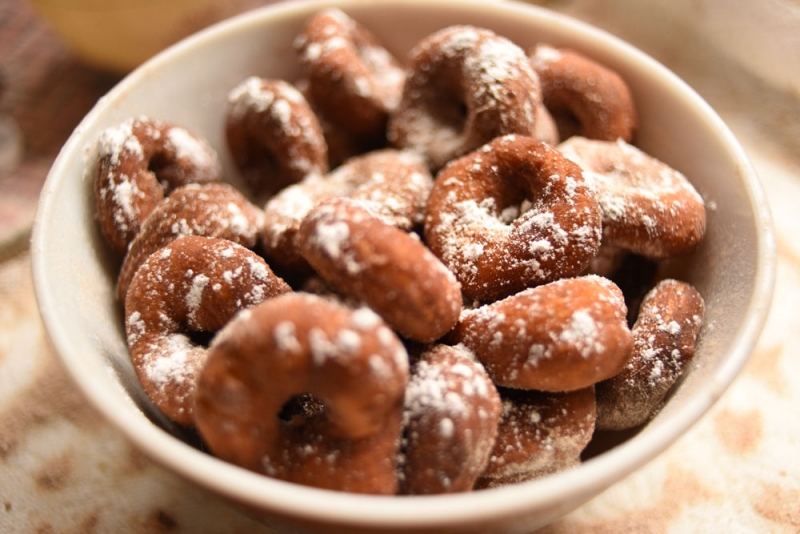 Food writer Julie Van Rosendaal often finds herself cooking her own Stampede food every July, saying it’s easier than people think, and the iconic mini-doughnut is no exception. “Mini-doughnuts are easy to start with, and they’re fun for kids to help out with,” says Van Rosendaal. “If you can make your own mini-doughnuts, you’re like a superhero to all your friends. It’s the best thing, and super fun to do during Stampede.”

Here’s her recipe for frying up a classic.

In a large bowl, stir together the yeast and water and set it aside for five minutes until it’s foamy. (If it doesn’t foam, throw it out and buy fresh yeast. It won’t foam much, but if it just sits there and does nothing, it’s inactive.) Add the flour, milk, butter, egg, sugar and salt, and stir/knead until you have a soft, tacky dough. Knead until smooth and elastic, cover and set aside for an hour.

Turn the dough out onto a lightly floured surface and pat with floured hands until it’s about a half-inch thick. Cut out as many rounds as possible with the rim of a shot glass and poke a hole in each with your finger, stretching it out a bit as it will puff up as it cooks, closing the hole somewhat. If you like, cover with a kitchen towel and let them rise for another 20 to 30 minutes (this isn’t necessary, but will produce lighter doughnuts).

Heat about two inches of oil in a deep, heavy saucepan until it’s hot, but not smoking. You’ll know when it’s hot enough by dipping in a piece of bread or a bit of dough – it should start sizzling right away. If the oil is too cool, the doughnuts will take too long to cook and will absorb too much oil, making them heavy.

Cook doughnuts in batches, turning occasionally with tongs or a slotted spoon until puffed and golden, about two minutes per batch.

Transfer to paper towels to drain, then toss in cinnamon-sugar while still warm. Makes lots.

A Guide to Outdoor Entertaining During the Winter in Calgary